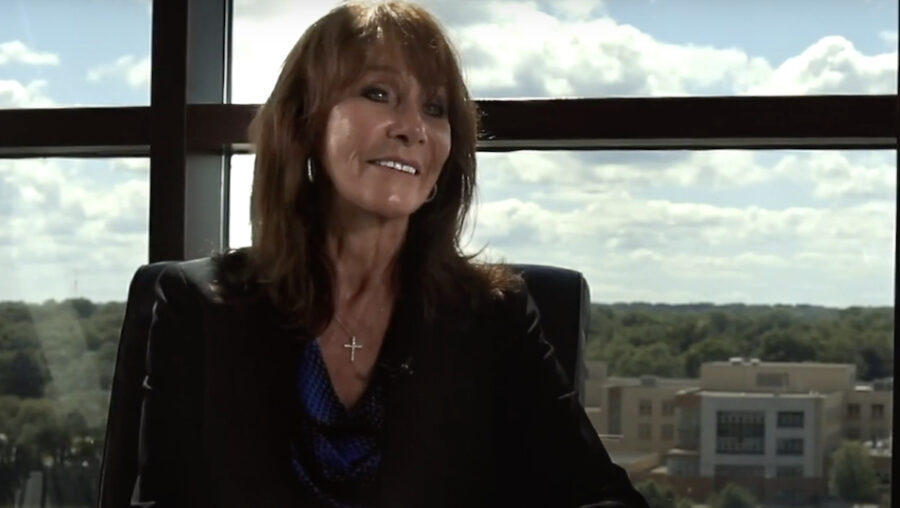 The GOP megadonor Diane Hendricks is hosting a fundraiser for Tim Michels, Republican candidate for Wisconsin governor in Lake Geneva, Wisconsin, on October 5.

The corn and brat roast with Michels on the Pearce Family Farms is also hosted by Brent Fox, Hendricks’ son from her first marriage, and Kim Hendricks, Diane’s stepdaughter, an invitation obtained by the Center for Media and Democracy details.

Donations to Michels for Governor are solicited on the invite from $250 to the maximum contribution of $20,000.

Michels is facing off against incumbent Governor Tony Evers (D) on November 8 in what has shaped up to be a tight race in the most expensive gubernatorial general election in the nation.

Michels had originally said that he would not accept individual donations of more than $500 so that he wouldn’t “be influenced by anyone in this race,” but walked that back after winning the primary.

Diane Hendricks, who Forbes estimates is worth $11.6 billion, is the chair and co-founder of Hendricks Holding Co. and ABC Supply, the largest roofing supply firm in the country, based in Beloit, Wisconsin.

Hendricks is currently listed as the 12th largest GOP donor to federal races this cycle by OpenSecrets. She is credited with boosting Michels campaign in the primary by introducing him to Trump, who stumped for the Michels campaign with a rally before the primary.

In May, Hendricks also hosted a luncheon for Michels in Beloit where attendees could “learn about his goals for Wisconsin.”

Before backing Michels, Hendricks had attempted to encourage former Wisconsin Governor Tommy Thompson (R) to run, even taking a pilgrimage to Mar-a-Lago with him and Reince Priebus, Trump’s former White House chief of staff and chair of the Republican National Committee.

Other billionaires listed on the invitation include Republican megadonor Richard “Dick” Uihlein, and Helen and Craig Leipold.

Uihlein has moved to support Michels after contributing $4.5 million to a PAC supporting Kevin Nicholson’s campaign in the primary. His wife Elizabeth, who spent $220,000 to prop up the campaign of Rebecca Kleefisch, is not listed on the invitation.

Richard Uihlein is the largest donor to federal Republican candidates this cycle, according to OpenSecrets.

Helen Johnson-Leipold, heir to the family-owned SC Johnson, a privately-held cleaning products company, and chair of the Johnson Financial Group. and her husband Craig Leipold, founder of Ameritel, a business-to-business telemarketing firm, and owner of the Grand Ole Opry and Minnesota Wild, are also throwing their support behind Michels.

Helen Johnson-Leipold is worth $4.4 billion and Craig Leipold is worth $3.6 billion. The Leipolds consistently donate to Republican candidates and committees, but not to the same extent as Hendricks or the Uihleins.

After pumping nearly $17 million of his own money into the race, Michels is off to a slow start raising campaign cash from other donors, bringing in less than $500,000 in August, compared to around $3 million in non-party funds for Evers during the same period. Of all the hosts listed on the invite, only Diane Hendricks ($500) and John Foxley ($260.25) have contributed directly to Michels for Governor so far, according to the latest disclosures filed with the Wisconsin Election Commission.

The venture capitalist John Anderson, who is listed alongside his wife Linda as host for the Michels fundraiser, originally backed Kleefisch in the primary and criticized Club for Growth‘s support for Michels.

A letter to the Club for Growth signed by Anderson, Mike Grebe, the former state GOP chairman and chairman of the Bradley Foundation, and major Wisconsin right-wing donors Fred Young and Anthony and Andrea Bryant, stated that Michels, “does not have the same breadth of experience and unwavering conviction to these conservative principles,” and that “Repeated gaffes by the Michels campaign have also demonstrated it lacks the competency and talent demanded to win a competitive statewide race in Wisconsin.”

The Hendricks fundraiser for the Michels campaign in Lake Geneva is strategically timed to take place just before the 12th Annual Bradley Impact Conference at the Grand Geneva Resort on Oct. 6-7, which attracts major right-wing donors from across the country.