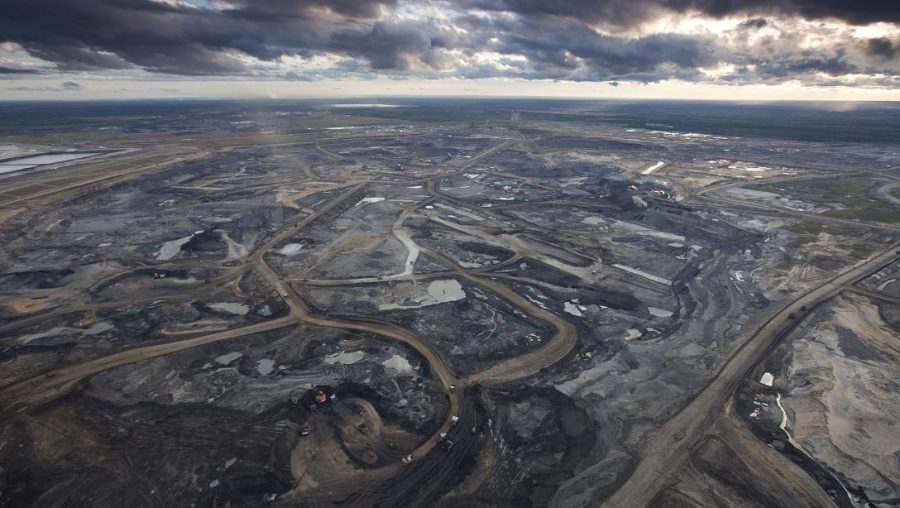 The American Legislative Exchange Council (ALEC) recently adopted a “model” bill from an oil-industry lobby group, that would limit the ability of states to negotiate regional “low-carbon fuel standards” (LCFS), a mechanism designed to reduce the carbon intensity of transportation fuels. If agreed by states, LCFS could have a significant impact on the sale of fuels derived from Canadian tar sands in the United States, regardless of any decision the Obama administration makes over the proposed Keystone XL pipeline.

ALEC’s interest in the tar sands is increasingly active. It organized a tour of the Alberta tar sands for its members in October 2012, and as previously reported by CMD, at least seven states introduced resolutions in 2013 calling for the approval of the controversial Keystone XL pipeline from Canada to Texas. The resolutions contained language from an ALEC “model” bill and from a set of talking points by TransCanada, the proposed pipeline operator that was also listed as a sponsor of the most recent ALEC conference that took place in Oklahoma City in May 2013.

The new ALEC “model” bill, called “Restrictions on Participation in Low-Carbon Fuel Standards Programs,” was sponsored at an ALEC conference in Washington, DC in November 2012, by Steve Higley, a lobbyist from the U.S.-based industry group American Fuel and Petrochemical Manufacturers (AFPM). Koch Industries and Exxon Mobil, both of which are represented on the ALEC Private Enterprise Advisory Council, are members of AFPM and have executives sitting on the board of directors.

The ALEC bill is intended to block environmental LCFS agreements. The implementation of LCFS poses a threat to the continued U.S. market for oil derived from the Canadian tar sands. Following the passage of the California LCFS law in 2006 — so far the only state to have such a standard in operation — the president of AFPM stated it would “harm our nation’s energy security by discouraging the use of Canadian crude oil.”

ALEC made similar claims in a 2010 email to members of its Energy, Environment and Agriculture task force, in which it made the case that LCFS would shift consumption away from Canadian crude derived from the Alberta tar sands and towards “non-North American sources.” ALEC cited a 2010 study by Barr Engineering Company, called “Low Carbon Fuel Standard ‘Crude Shuffle’ Greenhouse Gas Impacts Analysis.” The study was commissioned by none other than AFPM, albeit under its previous name, the National Petrochemical & Refiners Association. The report asserts that the implementation of LCFS would create a “shuffle” of global crude supplies, as crude from the Canadian tar sands moves to other parts of the world more willing to take such a dirty fuel.

“Tar sands are fueling climate change no matter where it is used because its extraction and processing causes more carbon pollution.” Luke Tonachel, senior vehicles analyst at the Natural Resources Defense Council (NRDC) told CMD. “The argument that the LCFS will cause tar sands to be shuffled is specious. Tar sands producers are already targeting far away markets. Tar sands producers supporting Keystone XL are trying to get their product to Gulf of Mexico refineries so it can be exported as finished product.”

The ALEC bill is modeled on a 2012 New Hampshire law, designed to limit the ability of the state governor to enter into regional LCFS agreements with other states.

LCFS would place a limit on the amount of carbon released as a result of using certain fuels, measured over that fuel’s entire lifecycle from when it’s taken out of the ground to when it’s pumped at the gas station. This poses a particular challenge for oil derived from Canadian tar sands, which is dirtier than other sources of oil and requires more processing to turn it into a usable fuel.

On December 30, 2010, governors of eleven Northeast and Mid-Atlantic states — Connecticut, Delaware, Maine, Maryland, Massachusetts, New Hampshire, New Jersey, New York, Pennsylvania, Rhode Island, and Vermont — signed a Memorandum of Understanding, committing to develop a regional LCFS, designed to lower the levels of damaging greenhouse gas emissions from the use of transportation and heating fuels. The response to the governors’ plan in New Hampshire was an industry supported bill — HB1487 — backed by a campaign led by the David Koch funded Americans for Prosperity (AFP), aimed at undercutting the ability of the eleven state governors to negotiate LCFS. That bill is precisely the one now being promoted by ALEC.

According to documents obtained by CMD, AFPM, the group behind the new ALEC “model” bill also co-sponsored an ALEC-organized three-day trip for state legislators to visit the Alberta tar sands in October 2012, just a month before they brought the “model” bill to the ALEC conference in Washington, DC. The trip was described in the obtained documents as an “ALEC Academy,” which according to a pricelist of ALEC events typically carries an $80,000 sponsorship price tag.

During the trip, while dining on expensive steaks at Ruth’s Chris Steakhouse in downtown Calgary, AFPM lobbyist Steve Higley gave a presentation to the ALEC legislators on the ‘threat’ of LCFS. Just over a month later, Higley presented on the same issue at the ALEC conference, calling for the introduction of the New Hampshire law as an ALEC “model” bill. He would have been surrounded by lobbyists from many oil companies with interests in the Canadian tar sands.

“I was struck by how much industry having a prominent role within ALEC is just taken for granted,” Rick Russman told CMD in a telephone interview. Russman, a former Republican state senator from New Hampshire, attended the ALEC Energy, Environment and Agriculture Task Force meeting in Washington, DC at which the LCFS bill was passed.

“These ALEC events are put on to benefit industry, not to serve the environment or to serve the interests of the country.” Russman, who co-founded the National Caucus of Environmental Legislators, is a former chair of the National Conference of State Legislators Committee on the Environment. “At NCSL we always tried to have speakers from different sides of a debate, to try to have a balance, but that isn’t at all the case at ALEC. It’s not geared to be a fair debate,” he said.

One of the other Alberta ALEC Academy sponsors was the Consumer Energy Alliance (CEA), an oil industry front group that has campaigned against LCFS for several years, and which has close connections to AFPM, ALEC and the Alberta government. A top lobbyist for the group has played a key role in the coordinated fight back against the LCFS initiative.

In a 2011 article for Salon.com, Canadian reporter Geoff Dembicki exposed email communications between Michael Whatley and then Alberta government diplomat Gary Mar, in which Whatley pitched the Alberta government on a campaign to oppose LCFS in the U.S. at the state and federal level. In the emails, Whatley warned that the northeast state governors’ plan needed “a very serious response on all levels.”

In a later email, Whatley told Mar that his plan was to work to oppose LCFS with “affiliated energy coalitions and trade associations, thought leaders, elected officials, unions and key allies.”

Soon after, CEA began vigorously campaigning against LCFS. According to the group’s 2011 and 2012 IRS filings, it devoted about one quarter of its entire budget in both years to an anti-LCFS campaign, amounting to $882,890 in 2011 and $730,607 in 2012. After the New Hampshire law passed, Whatley took the opportunity to slam LCFS, bemoaning that it would inevitably “discriminate against traditional fuels like gasoline and diesel.”

CEA is organized as a non-profit group and its list of funders is unknown, but on its website it does list “affiliates,” including a large number of oil companies with interests in the Canadian tar sands such as BP, Exxon Mobil, Shell and Devon Energy. The list also includes industry lobby groups such as the American Petroleum Institute and the AFPM, both of which have proven financial ties to CEA.

In its 2011 IRS filings (the most recent to be publicly available), AFPM noted that it was seeking “contribution pledges from specific member companies to introduce a public relations campaign to educate and inform target audiences about the adverse impacts of low carbon fuel standards.” The same year it provided more than a million dollars to CEA in consulting fees.

The tar sands of Alberta, containing an estimated 169.3 billion barrels of oil, are estimated to be the third largest reserve of crude oil on the planet, behind only Saudi Arabia and Venezuela. But the tar sands are also the most polluting source of energy on earth, requiring heavy processing to release oil from sticky tarlike bitumen. The extraction and refining process releases more greenhouse gases into the atmosphere than conventional oil drilling, and by some estimates is leaving behind a legacy of devastation in the Alberta environment — destroying forests, poisoning water and polluting the atmosphere with toxic byproducts.

The world’s most prominent climate scientist, former NASA scientist James Hansen, recently warned that the continued and expanded use of Canadian tar sands would be “game over” for the climate. Interviewed in The Guardian, Hansen said: “Oil from tar sands makes sense only for a small number of people who are making a lot of money from that product. It doesn’t make sense for the rest of the people on the planet.”

According to Luke Tonachel of NRDC, who maintains that the ultimate market place for the tar sands derived oil is not the U.S. but abroad, the reason industry is so scared of LCFS is that it might be seen as a positive model that would be adopted elsewhere. “The advancement of policies in the U.S. that require the fuel supply to get cleaner in terms of carbon instead of dirtier can be a model for other countries to adopt, which would reduce the demand for tar sands-derived fuels in export markets,” Tonachel told CMD by email.

The idea that the United States might present a positive global model on the environment may surprise some, but it will come as no surprise that a significant obstacle to such positive change at the state level has been ALEC and its allies.