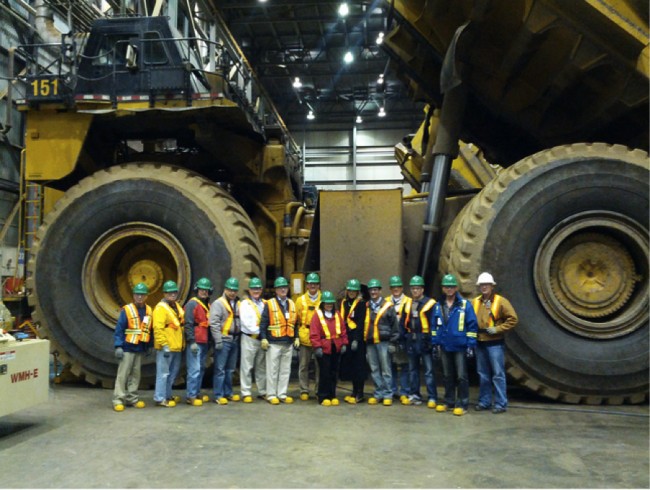 In October 2012, nine U.S. state legislators went on an industry paid trip to explore the Alberta tar sands. Publicly described as an “ALEC Academy,” documents obtained by CMD show the legislators were accompanied on a chartered flight by a gaggle of oil-industry lobbyists, were served lunch by Shell Oil, dinner by the Canadian Association of Petroleum Producers, and that the expenses of the trip were paid for by TransCanada and other corporations and groups with a direct financial interest in the Alberta tar sands and the proposed Keystone XL (KXL) pipeline.

Among the nine legislators on the tour was the new ALEC national chairman, Representative John Piscopo from Connecticut, and Senator Jim Smith from Nebraska who has sponsored legislation in his state to speed up the building of the Nebraska segment of KXL. Email records obtained by CMD show that after the trip, legislators were asked by ALEC to send “thank you notes” to the lobbyists for their generosity in Alberta.

Far better than a mere “thank you,” Rep. John Adams from Ohio returned from the trip and sponsored a bill given to him by a TransCanada lobbyist calling for the approval of KXL. As previously reported by CMD, similar legislation, reflecting both an ALEC “model” bill and language taken from a TransCanada set of talking points, has been introduced in seven states in 2013.

The tar sands of Alberta are estimated to be the third largest reserve of crude oil on the planet. But the process of turning the tar-like bitumen into a refined product that can be used as fuel is extremely energy intensive and highly polluting. The former NASA scientist James Hansen, warned that the extraction and use of Canadian tar sands would mean “game over” for the climate. TransCanada is the operator of the proposed KXL pipeline, which would carry the tar sands to Texas for processing and likely for exports to markets abroad.

In Private Jets and “Petroleum Club” Dinners, U.S Politicians Get the Dirt on Canadian Tar Sands

Officially, ALEC organized the Alberta tour as an “ALEC Academy.” In ALEC’s description of corporate sponsorship opportunities, this type of event is described as being “an intensive, two–day program for legislators that focus on a specific area of policy.” It comes with an $80,000 fee to sponsor. Unofficially however, and made clear to legislators on the trip in emails from ALEC obtained by CMD, the expenses were paid for by lobbyists from the oil-industry and by the government of Alberta. In an email sent to Ohio representative John Adams ahead of the trip, ALEC staffer Karla Jones reassured participants that all transportation, accommodation costs and meals would be paid for.

According to a copy of the trip itinerary obtained via a public records request, legislators flew into Alberta on Tuesday October 16, 2012, and were met by TransCanada lobbyists who took them on a tour of their facilities in Calgary.

TransCanada, which is a member of ALEC, sponsored ALEC’s Spring Task Force Summit in Oklahoma City in May 2013, alongside other corporations with tar sands interests including BP, Devon Energy and Koch Industries. TransCanada’s Vice President Corey Goulet presented to legislators at the conference during a session called “Embracing American Energy Opportunities.”

Dinner on the first night was at the up-market Ruth’s Chris Steakhouse in downtown Calgary, paid for by American Fuel and Petrochemical Manufacturers (AFPM). The dinner included a presentation to the captive audience of lawmakers from AFPM about Low-Carbon Fuel Standards (LCFS), a mechanism designed to reduce the carbon intensity of transportation fuels. As CMD has reported recently, LCFS is considered a real threat to the tar sands industry, because it might restrict the U.S. market for fuels derived from the tar sands. AFPM, which has funded one of the other groups on the tour — the Consumer Energy Alliance (CEA) — to work to oppose LCFS legislation, would successfully sponsor an ALEC “model” bill on this issue just weeks after the trip, called “Restrictions on Participation in Low-Carbon Fuel Standards Programs.”

On Wednesday morning, after breakfast at the hotel, legislators were taken to the airport where a private charted plane was waiting to fly them around a number of different tar sands operations. Accompanying the legislators and ALEC staffer Karla Jones, were lobbyists from AFPM, TransCanada, Devon Energy, CEA, Shell Oil, and the Government of Alberta. The flight was chartered by the Alberta Government, at a cost of $22,000, with the costs split evenly between them and another unknown entity.

During the day, legislators toured facilities owned by Shell — which also provided lunch — and Devon Energy, where they viewed the massive “Jackfish” tar sands projects. At these facilities, Devon utilizes Steam Assisted Gravity Drainage (SAGD), an energy intensive process that injects steam into the dirty bitumen to access otherwise inaccessible deposits too deep for mining. This process is expected to open up further areas of Alberta for tar sands extraction, including by Koch Industries subsidiary Koch Exploration Canada which has a pending permit request in Alberta to utilize SAGD.

Dinner on Wednesday night was served at the Petroleum Club, sponsored by the Canadian Association of Petroleum Producers. On the Thursday morning, just before their return flight, legislators did have a brief meeting with a representative from the Pembina Institute, an Alberta environmental group that calls for responsible exploitation of the tar sands. According to the ALEC trip itinerary, this was to “provide the opposing point of view.”

Although Pembina does represent a different view from those that want completely unrestrained extraction of the tar sands, the group is not representative of those that oppose tar sands extraction. There are plenty of organizations that could have provided alternative viewpoints, particularly First Nation tribal leaders who are campaigning vigorously on this issue, but perhaps unsurprisingly they were not included. Even Pembina’s — somewhat limited — opposing voice was not wanted during the tour of the oil sands facilities, and they were not invited to the lobbyist-sponsored dinners.

A month after the trip, the Director of International and Federal Relations at ALEC, Karla Jones, sent participants an email helpfully reminding them of what each industry lobbyist had paid for on the tour. CMD obtained a copy of that communication via a public records request, which included a spreadsheet containing the names, telephone numbers and mailing addresses of each of the lobbyists on the trip. The ALEC email also prompted legislators to send each of the sponsoring corporations a “thank you note.”

The phenomenon of ALEC legislators sending such letters to lobbyists is something CMD has previously reported on. Ohio Rep. Adams, for example, sent at least a dozen letters to corporate lobbyists in 2010, thanking them for writing checks to the ALEC scholarship fund, which paid his and his colleagues way to an ALEC conference.

“Because of your help and others like you, the trip to ALEC was made possible for our legislators,” Adams wrote to AT&T lobbyist Bob Blazer.

“Rather than sending thank you notes to their corporate lobbyist sponsors, these legislators should instead consider an apology to their constituents,” Stephen Spaulding, Staff Counsel for the good government group Common Cause told CMD. “I doubt lobbyists want thank you notes in return for bankrolling legislators’ international vacations — they would rather a bright, shiny souvenir in the form of corporate-drafted legislation.”

Better Than a Thank You Note, Payback in Ohio

After the trip to Alberta, Rep. Adams, the Assistant Majority Floor Leader and Ohio ALEC state chair, led the calls in Ohio for the approval of the KXL pipeline, sponsoring a bill (HCR 9) and talking publicly about the proposed pipeline. “It is of the upmost importance that we strongly urge the U.S. government to take the necessary steps towards operation of the Keystone Pipeline,” Adams wrote in March 2013 while promoting his bill. Rep. Rosenberger, the other Ohio legislator on the ALEC trip to Alberta, accordingly co-sponsored the Adams bill.

According to documents CMD obtained from public record requests in Ohio, a draft bill was sent to Adams on January 23, from Steve Dimon of 21 Consulting LLC, who represents TransCanada. The bill was sent as an attachment to the Dimon email.

The email message itself simply read, “Thank you so much!”

Dimon stayed in touch with Adams’ office over the following months, providing his staff with further materials about Keystone XL, including a set of talking points stamped with the TransCanada logo.

By February 14, Adams had an updated draft that had been reviewed by the Ohio legislative service commission, the non-partisan body that assists legislators with drafting legislation. Adams staffer Ryan Crawford sent this language to Rob Eshenbaugh, a lobbyist with Ohio Petroleum Council, the state affiliate of the American Petroleum Institute. “Please let me know if I can be of further assistance,” Crawford wrote to the lobbyist. Eshenbaugh responded with some requested changes, which Crawford then incorporated into the bill.

All this occurred prior to Adams sharing the bill with his fellow legislators, which didn’t happen until February 20. Adams finally introduced his bill in the Ohio Assembly on March 9, without any public statement about his involvement with the ALEC Academy or that the source of the bill was a tar sands lobbyist.

The route of the proposed KXL pipeline takes it through Montana, South Dakota, Nebraska, Kansas, Oklahoma, and Texas. This is a long way from Ohio, but the debate over the KXL project has become a national issue. The ALEC Academy, and subsequent lobbying from the oil-industry, demonstrates that TransCanada sees value in developing a list of states supportive of the project to influence the federal debate over KXL approval.

The precise details of the ALEC tour, including the trip being part-sponsored by TransCanada, are not mentioned in Adams’ financial disclosures, which only reports his expenses as being from ALEC and the Alberta Government. Adams is not breaking the law here. This is because of the way ALEC works to fund legislator travel. Its scholarship system allows corporations to “sponsor” legislator’s expenses, which are then simply disclosed as being a payment from “ALEC” and not from the sponsoring corporations or groups. CMD documented the ALEC scholarship fund in a 2012 report released jointly with Common Cause: “How the American Legislative Exchange Council Uses Corporate-Funded “Scholarships” to Send Lawmakers on Trips with Corporate Lobbyists.”

Graduates of the Keystone Academy appear to be learning a lot about how ALEC works behind the scenes to promote special interest legislation while keeping the public entirely in the dark.