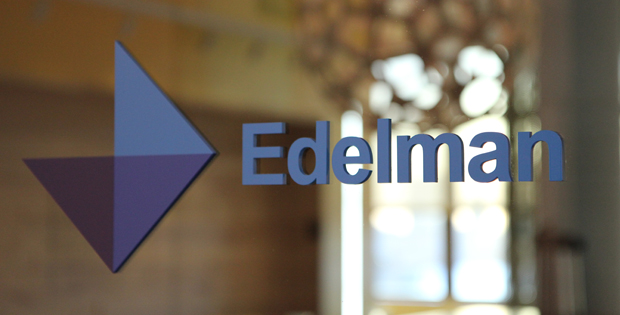 Edelman, the world’s largest PR company, synonymous with astroturf-style front groups and dirty tricks, has announced that it will no longer work for groups that deny climate change. The PR firm represents many of the world’s most polluting companies, and numerous front groups for polluters, including the American Legislative Exchange Council (ALEC). It has so far refused to say whether it will be continuing to work for ALEC, despite that group’s high-profile work to block action on climate change.

The announcement from Edelman came following a survey of PR firms by the Climate Investigations Center, run by former Greenpeace Research Director Kert Davies, and the Guardian. Firms were asked about their work with climate denial groups and most pledged to avoid such clients. Edelman mishandled its initial response, accidentally copying Davies in on an internal email saying no response was necessary, then followed that up by stonewalling the newspaper, telling the Guardian that Edelman “takes on clients on a case-by-case basis.” This eventually led to the firing of the head of Edelman U.S., Mark Hass.

It appears to be an epic fail by some of the world’s highest paid spinmeisters. This is usually the point at which an embarrassed company calls in Edelman for help.

A lot has happened since this story first broke at the Guardian, which Brian Merchant for Motherboard at Vice has covered in great detail in two articles here and here, and Edelman himself has been forced to address it. Merchant received a call from Richard Edelman, President of the firm, telling the reporter that his article had “haunted” him. “I just want you to know we’re not bad people, that’s all,” Edelman reportedly told Merchant. The next day, Richard Edelman posted an article of his own on the company website, titled “Edelman’s Position on Climate Change,” stating “We do not accept clients that seek to deny climate change.”

The statement may sound categorical, but Richard Edelman refused to answer Merchant’s questions about its work for ALEC. Edelman had been brought in to help ALEC in 2012, following the launch of CMD’s ALEC Exposed project, and after the death of teenager Trayvon Martin in Florida. ALEC was facing extreme public pressure in 2012 for its role in promoting Stand Your Ground legislation across the country, the same legislation which delayed the eventual arrest of George Zimmerman following Martin’s death. In the wake of the controversy, 72 companies and hundreds of legislators dumped ALEC.

If Edelman is serious about not working for groups that deny climate change, then it should also not work for groups like ALEC, which is working hard to block any action at the federal or state level to address the problem.

Here is just a sampling of ALEC’s work on climate on behalf of the fossil fuel firms that bankroll the organization:

ALEC legislators were called upon to engage in “Guerrilla Warfare” against the EPA, during its conference in Washington, DC in December 2013, over proposed limits on carbon pollution from coal plants. President Obama has made action on climate change a primary objective for the remainder of his term of office, proposing the first limits on carbon pollution from coal plants ever in the U.S.. The proposals are relatively modest, with just an effective seven percent reduction (based on 1990 levels) by 2030, compared to a proposed 40 percent reduction in the EU and higher elsewhere over the same period.

“The EPA’s proposal to cut carbon pollution from the power sector is both the most important thing a U.S. President has done to address climate change, and woefully inadequate, given the urgent warnings from climate scientists,” said Gabe Wisniewski, Greenpeace USA climate campaign director, quoted in the latest issue of The Progressive magazine.

Funded by companies like coal giant Peabody Energy, and major coal-burning utilities including American Electric Power, ALEC has been frantic, organizing monthly conference calls, promoting “model” legislation, holding workshops and other sessions, and calling on its legislator members to engage their state’s Attorney General to litigate the rules. All this, and so far the rules are just a proposal. The final draft is expected in June 2015.

The ALEC model is pay-to-play: according to a 2013 ALEC price list, a workshop at ALEC’s annual meeting would cost $40,000 that year. The Committee For A Constructive Tomorrow, a climate change denial group, held a workshop at ALEC’s August 2014 annual meeting titled “How to Think and Talk About Climate and Energy Issues.” At the ALEC Energy, Environment and Agriculture task force meeting held at the same conference, Joe Bast of the Heartland Institute, another climate change denial group, briefed legislators on the supposed lies of climate scientists. Bast was representing the “NIPCC”, a climate denial front group of the Heartland Institute. A session at the ALEC annual meeting in 2011 was titled: “Warming Up to Climate Change: The Many Benefits of Increased Atmospheric CO2.”

ALEC Wants to Ramp up Costs for Homeowners with Solar

The solar industry in the U.S. is booming, with a sixty percent increase in home solar installations in 2013. This represents a threat to the utility industries, which largely burn a mixture of coal (37 percent) and natural gas (30 percent). The trade association for the utilities – The Edison Electric Institute (EEI) – an ALEC funder, has been fighting back. It hired the top Energy staffer from ALEC, Todd Wynn, and has been funding anti solar work by ALEC. In 2014, ALEC has been promoting model legislation which would increase costs for homeowners with solar, which ALEC has called “freeriders on the system.”

Twenty-nine states and the District of Columbia have now established minimum targets for electricity generation from renewables. A raft of groups have targeted these laws for destruction, including Americans for Prosperity, the Koch-backed State Policy Network (SPN) with its network of state-level think tanks, and ALEC.

The ALEC Energy, Environment and Agriculture task force, stacked with lobbyists from fossil fuel companies and groups like Americans for Prosperity, adopted a “model” bill in 2012 titled the “Electricity Freedom Act,” which would repeal state renewable standards. The bill was written by the Heartland Institute, a group infamous for comparing those that believe in climate change to the Unabomber, Ted Kaczynski. According to an internal ALEC tracking document obtained by CMD, 31 bills relating to the ALEC Electricity Freedom Act were introduced in 2014, with ALEC scoring its first success in Ohio as it voted to freeze its state mandate. The Ohio bill was sponsored by ALEC board member, Senator Bill Seitz.

Professor James Hansen has said that exploiting Canadian tar sands would mean “game over” for the climate. The proposed Keystone-XL pipeline would carry 830,000 barrels of oil per day from Alberta, down for processing and export in Texas. The proposal is highly controversial and is seen as a test of the Obama administration’s seriousness on tackling climate change.

ALEC, funded by TransCanada and by a wealth of corporations extracting tar sands in Alberta, including Koch Industries and Shell, has been hyping the pipeline since 2011. Ten states introduced legislation similar to an ALEC Keystone-XL “model” bill in 2013, with a further four bills in 2014. ALEC has organized trips to Alberta for its legislators in 2012 and 2013, with lawmakers’ expenses paid for by TransCanada and other corporations. After one of these trips, ALEC sent legislators an email suggesting they send “thank you notes” to the corporate lobbyists on the trip who paid the bills.

And So Much More…

Over the past few decades, ALEC has been the primary vehicle at the state level for major polluters to push their legislative agenda. Through its annual conferences and “model” legislation, ALEC has campaigned against the Kyoto agreement, worked to wreck regional greenhouse gas carbon trading schemes, block low-carbon fuel standards, promoted off-shore drilling, pressed to keep fracking chemicals secret, pushed for further exploitation of western lands for drilling and mining, and it has opposed virtually every EPA regulation that impacts its highly polluting sponsors. At its recent Annual Meeting in Dallas, one third of the conference sponsors were energy companies, including ExxonMobil, Peabody, TransCanada and 18 others.

ALEC claims to get about a thousand of its bills introduced every year across a range of issues with a substantial number affecting the environment. The ALEC impact goes deep, providing a seemingly quasi-independent voice for the policies of big polluters, hiding the true financial interests, which would continue to pollute the environment whatever the cost to our climate or human health, providing it turns a profit.

CMD reached out to Edelman repeatedly for comment about its relationship with ALEC, but received no response.