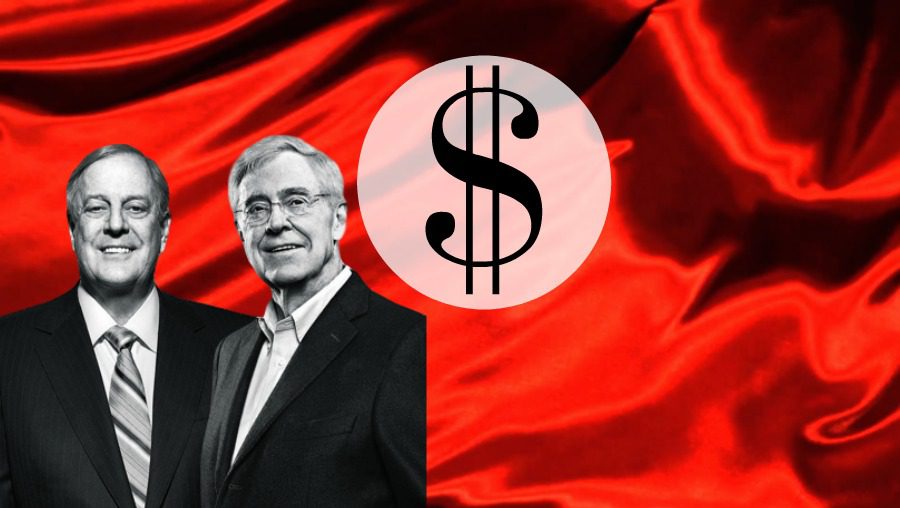 CLEVELAND — Though the Kochs have indicated they are staying out of the presidential election and Charles Koch has even had kind words for the Clintons, their fingerprints are all over the Republican National Convention in Cleveland this week in the form of candidates and the extreme RNC platform.

The Kochs have had their doubts about Donald Trump, early on refusing to share their voter data base with him and spending their money down-ballot after it appeared he would win the nomination. As CMD has reported, the Kochs have been busy investing millions in a faux “grassroots” ground game in key states. They are hoping to rival labor’s mastery in turning out committed volunteer door knockers, by paying an army of teenagers to hit the doors.

The Kochs are not the only people who have their doubts. A sharply divided GOP on full display last night on the floor of the Quicken Arena in Cleveland. The Texas delegation, relegated to the back of the room, was hooting and hollering for their man Ted Cruz, but the New York delegation turned their backs, and boos broke out across the arena when it became apparent that Cruz was not going to throw his support behind Trump.

It was a sharply divided GOP on full display last night. The Texas delegation, relegated to the back of the room, was hooting and hollering for their man Ted Cruz, the New York delegation turned their backs, and boos broke out when it became apparent that Cruz was not going to throw his support behind Trump.

Watching the drama from the wings, Trump came out onto the floor unexpectedly, throwing the Secret Service into a tizzy and stealing all the cameras from Cruz. When Cruz finally left the floor to find his wife, who herself was chased to the wings with cries of “Goldman Sachs!,” no cameras were on him.

Knowing he would have challenges to unite the party, Trump picked a standard-bearer who he hoped would appeal to all: Indiana Governor Mike Pence, who Trump said “looks good,” and that “to be honest,” part of the reason for his selection was to unify the party.

Pence took to the stage last night to introduce himself as “a Christian, a Conservative, and a Republican, in that order,” to a welcoming crowd. Delegates appeared to appreciate his amusing remarks and humble talk, which introduced his family and reprised his struggle for conservative causes.

But Pence failed to mention his biggest billionaire backers, David and Charles Koch and the institutions they bankroll.

In an interview with Lauren Windsor of The Undercurrent outside the convention, Tim Phillips, President of the Kochs’ Americans for Prosperity, said he loved Mike Pence: “he had a great record in the House.” But Phillips was being too modest.

Over the years, the Koch network has contributed large amounts of money to Governor Pence, who has pursued a legislative agenda straight out of the Koch-ALEC playbook. In terms of individual donations, David Koch’s $300,000 makes him the third largest donor, and Senior Vice President of AFP and General Counsel of Koch Industries Mark Holden’s $202,500 makes him the sixth.

And Pence is scheduled to be a “featured guest” at the Koch network’s semiannual donor retreat to be held at a resort in Colorado July 30-August 1, 2016 (for more on Pence’s bio see CMD’s SourceWatch).

When Marco Rubio failed to win the Presidential primary, top Koch operative Marc Short started advising Pence. Short joins the 2016 Trump-Pence campaign as Pence’s communication advisor. “Marc is a friend and we had the opportunity to work together when I was serving in the Congress of the United States, and I have immense respect for his integrity and his judgment,” said Pence at a Koch event in 2014.

But Pence is not the only Koch candidate to address the convention.

Wisconsin Governor Scott Walker took to the floor in a prime time slot Wednesday night. Walker has been backed by the Kochs and AFP’s Tim Phillips throughout his career.

It is no secret that the Kochs would have preferred Walker as the presidential nominee; David Koch threw his support behind Walker early in 2015. And AFP’s Phillips told the media he had spent $10 million in Wisconsin in during the tumultuous recall period, when Walker’s attack on unionized public workers sparked an unprecedented series of recall elections.

Walker’s appearance in the main stage was a bit of a surprise. He was a leader of the #NeverTrump movement, throwing his support behind Cruz and helping the Senator from Texas score an unexpected primary win in Wisconsin. As late as Tuesday this week, Walker said floor delegates should “vote their conscience,” a phrase that sparked an uproar last night when spoken by Ted Cruz.

Now Walker has changed his tune, abandoning “Wisconsin Nice” to endorse Trump and bash Clinton as “the ultimate” liberal Washington insider, claiming: “if she were any more on the ‘inside,’ she’d be in prison.”

Senator Joni Ernst (R-IA), who was reportedly being considered for VP, was also on the main stage this week. Her election in 2014 was greatly aided by $400,000 that went from the Kochs’ Freedom Partners to a dark money group called “Trees of Liberty,” which then attacked Mark Jacobs, Ernst’s competitor. CMD filed a complaint against Trees of Liberty earlier this year.

And Senator Ron Johnson (R-WI) spoke to the RNC Tuesday night. Americans for Prosperity rolled out a $1.1 million campaign in support of Johnson, and the Kochs’ Freedom Partners Action Fund spent $2,025,048 attacking his opponent Russ Feingold. Feingold had accused Johnson of “outsourcing his campaign” to the Kochs. Yet the Kochs may have been underwhelmed, because the very next day they pulled down their ads in Wisconsin, abandoning Johnson to focus on more competitive Senate races.

It wasn’t just the politicians. “Kochsperts” spoke at multiple panels and events surrounding the RNC. Jason Beardsley, a Special Advisor to the Koch’s Concerned Veterans for America, took to the main stage to advance the privatization of the Veterans Administration. Rachel Campos-Duffy, wife of U.S. Representative Sean Duffy, also took to the stage as the national spokesperson for the Kochs’ Latino front group called the Libre Initiative. Penny Nance, President of the Koch-funded Concerned Women for America, was also scheduled to be in attendance.

The Kochsperts must have had a hand in the creation of the RNC Platform, because the list of American Legislative Exchange Council (ALEC)-approved policies in the platform is stunning. The Kochs have been among the biggest backers of ALEC and the member organizations, think tanks, and advocacy groups that aid ALEC for decades. Here are some of the Koch-ALEC policies and priorities reflected in the platform.

• Curtailing IRS oversight of dark money nonprofits active in elections, and repeal the prohibition on nonprofits engaging in political speech

• Attacking labor unions and workers’ rights on all fronts, from calling for a national anti-union “right-to-work” law, to demonizing the earned pension benefits of public employees, to allowing massive corporations like McDonald’s to evade taking responsibility for labor standards in their franchise stores

• Continue using the courts to attack the Affordable Care Act

• Protecting corporate wrongdoers through changes to tort laws, and making it harder to prosecute with stringent intent requirements

• Turning federal public lands over to the states for logging, drilling, and mining by private companies

• Continuing the fight to build the Keystone XL Pipeline