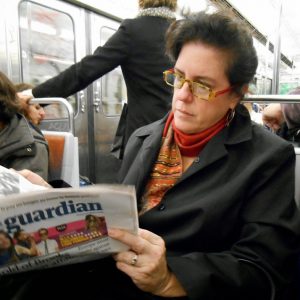 She spearheaded CMD's work on the 2008 Wall Street meltdown and subsequent attacks by right-wing politicians on organized labor and working families. Mary contributes frequently to the Huffington Post, Truthout, Alternet, Common Dreams, The Nation, the Capital Times and other media outlets. Her research has been used by Washington Post, the New York Times, Business Week, the New Yorker, Marketplace, CNN, Bill Moyers Journal, MSNBC and dozens of Wisconsin media outlets.

When too-big-to-fail financial service institutions collapsed the global economy in 2008, Mary launched CMD's BanksterUSA website and gained a following for making complex banking issues understandable, and for poking fun at the big banks and government officials for weak reforms and outrageous efforts to spin the crisis. At a time when the public was upset about the $700 billion TARP bailout bill, the Bankster project downloaded Federal Reserve data to publish one of the first tallies, program by program, showing that the Federal Reserves Wall Street Bailout was approaching $5 trillion. During the financial crisis, Mary contributed to the board of the Wall Street watchdog, Americans for Financial Reform.

Before coming to CMD, Mary worked for the consumer group Public Citizen and served as a senior analyst on trade, financial services, chemical and food safety. Mary was asked to serve on the 2016 DNC platform committee due to her expertise in trade and finance. For many years, she has been part of the Transatlantic Consumer Dialogue (TACD).

Previously, Mary worked in Washington for U.S. Senator Russ Feingold and in the Wisconsin State Senate. She has a BA from Bryn Mawr College and an MA from the University of Chicago. She lives in Madison, Wisconsin with her daughter and her husband John Nichols. Her favorite Wisconsin cheese is Pleasant Ridge Reserve.

Public transparency is an issue in the merger discussions.

Global climate actions kicked off by the young Swedish teen, Greta Thurnberg, nominated for a Nobel Peace Prize this week.

What are we to make of all the good news and talk of bipartisanship coming from the Koch camp?

Bill’s author never met the threshold for election that he is demanding for union recertification.