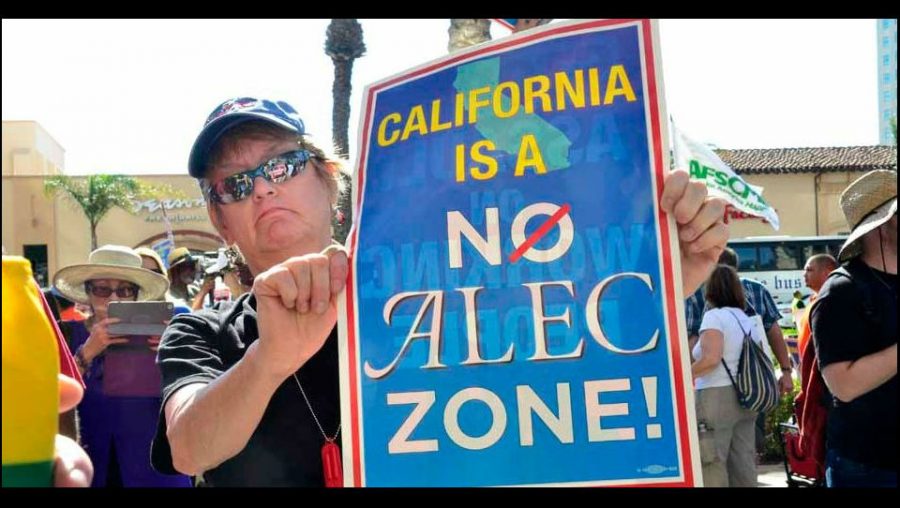 It’s becoming an annual ritual. The Koch-funded cluster of groups, which has long abused their 501(c)3 IRS “charitable” designation by working to destroy political enemies, has concocted another “union busting” toolkit, giving ammunition and guidance to Republican politicians on how to attack and dismantle a major funder of the Democratic Party.

The toolkit appears to have been prepared by American Legislative Exchange Council (ALEC) staff shortly after the Supreme Court’s June 2018 Janus vs. AFSCME decision, which held that unions could no longer require individuals in a bargaining unit who did not want to be members of a union to pay agency or “fair share” fees. Fair share fees compensate union staff who are required by law to represent all workers in a bargaining unit in their quest for better wages and working conditions.

ALEC is a collection of state politicians and corporate lobbyists from many of the largest corporations in the country. The Janus case was spearheaded by ALEC’s sister group, the $80 million State Policy Network (SPN), made up of 66 right-wing think tanks and other Koch-funded institutions.

The Center for Media and Democracy (CMD) uncovered a secret SPN “toolkit” that coaches politicians to replace anti-union rhetoric with phrases like “worker freedom” and “worker choice.” Also uncovered by CMD and published in the Guardian, were SPN private fundraising letters bluntly detailing strategies for dismantling unions and striking a “mortal blow” to progressive politics and the Democratic Party.

Today, CMD brings to light another iteration of the toolkit, which makes it clear that the ultimate goal of the ALEC-SPN groups is the end of worker power. The “Public Sector Union Legislative Toolkit” marked “draft” and dated August 2018, is authored by ALEC’s Commerce, Insurance and Economic Development Task Force along with anti-union zealot “Vinnie” Vernuccio of Michigan’s Mackinac Center.

In public and in legal filings before the court, ALEC and SPN have been careful to frame their activities as advancing the “free speech” rights of individual workers over “forced unionization.” Yet, time after time, this lofty rhetoric falls by the wayside and the true agenda is revealed.

The new ALEC toolkit gets right down to bare-knuckle tactics.

The toolkit discusses the Supreme Court’s Janus vs. AFSCME decision and presents an extreme view of how states should become compliant. Don’t just stop the payments of agency fee payers, recommends ALEC, but stop all union payments and force them back to square one:

While many states were quick to become compliant in removing agency fee payers from automated deductions, liberty-oriented organizations do not believe solely exempting agency fee payers is in full compliance with the law. Because workers cannot waive a right they did not know they had, the entire premise that employees have opted into a union pre-Janus is null and void. This standard requires that states remove all public sector union members and agency fee payers despite any previous signatures or proof of membership from before the Janus decision. This places the burden on unions to go out and re-solicit individuals to obtain ‘affirmative consent.’

The toolkit touts ALEC’s 18 anti-union bills, including the misnamed “right to work” bill, and highlights a new post-Janus bill, the “Public Employee Rights and Authorization Act,” which states: “Any authorization of payments to a labor organization provided before June 27, 2018 [the day of the Janus ruling], is insufficient to constitute affirmative consent or a waiver of an employee’s rights under Janus v. AFSCME.”

In other words, ALEC would force all members to rejoin, no matter how enthusiastic their support for the union.

Post Janus Toolkit Reveals that Bankrupting Unions Is the Goal

The toolkit also hails a case by the National Right to Work Legal Defense Foundation (NRWLDF), an SPN group, which is demanding that SEIU in California refund a whopping $100 million in fees to 40,000 current and former California state employees. NRWLDF talks like it represents 40,000 when only 18 plaintiffs signed onto the Hamidi v. SEIU case, which is still being litigated in federal court.

Some of these “claw back suits,” like the recent Lyon v. SEIU case in California, argue that the union knew, or should have known, that Janus was coming, so it should have stopped collecting fees. But past cases based on such theories have not been successful.

The unions have asserted a “good faith” defense in court, arguing that they are protected from monetary liability, because they collected fees according to the laws in effect at the time. Numerous circuit and appellate courts judges have agreed. In the Winner v. Rauner case, a judge with the United States District Court for the Northern District of Illinois ruled that “SEIU’s reliance on relevant precedent was reasonable” and that they should not be required to have telepathic insights into future cases.

The right to form and join a trade union is an internationally recognized human right enshrined in numerous declarations and treaties as well as state and federal law. ALEC’s focus on tactics and cases such as these illustrate that the goal is not the “free speech” rights of a minority of workers who do not like their union. The goal is putting an end to all unions for all workers.

“When these corporations were pushing so-called ‘right to work’ laws, they said their goal was to expand workers’ rights by letting everyone choose whether they want to be part of a union. That was never true. Their latest legislative push makes it clear that their only goal is to make it impossible for workers to have powerful organizations of their own, that would let them negotiate with their employers on something like an equal footing. This latest set of lawsuits and strategies is aimed simply at bankrupting unions,” said Gordon Lafer, Associate Professor at the University of Oregon’s Labor Education and Research Center.

“If, as these corporations want, unions are left with no staff, no attorneys, no offices, no meeting space, no ability to pay for workers to attend trainings or sit in on negotiations — unions will be dead, and workers will be back where everyone was 100 years ago, with no power to make sure that employees get their fair share of the profits that their work generates,” said Lafer.