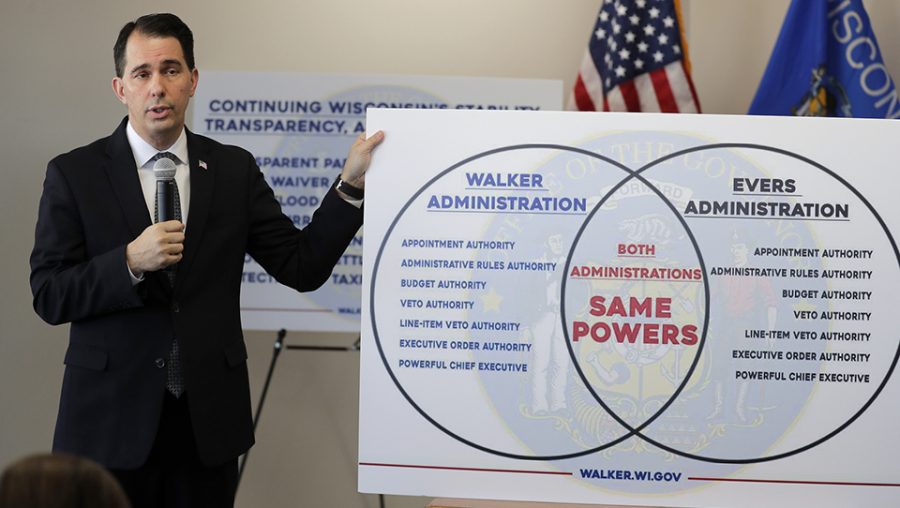 A Wisconsin judge ruled on Thursday that laws passed by the Republican-controlled legislature in December to limit the powers of newly elected Democratic Governor Tony Evers and Attorney General Josh Kaul were unconstitutional.

The lame-duck bills limited early voting, stopped the newly elected governor from expanding Medicaid coverage to more citizens, prevented him from withdrawing the state from a lawsuit attacking the Affordable Care Act, prevented the attorney general from representing the legislature in lawsuits, and further curtailed the administrative powers of the new government.

The lawsuit was brought by a coalition of plaintiffs, including three citizen’s groups, the League of Women Voters, Disability Rights Wisconsin, Black Leaders Organizing for Communities. It argues that three bills passed last December in the lame-duck session as well as the confirmation of 82 nominees to various boards “are unenforceable” on the basis that “executive session” during which the laws were enacted “was not convened in accord with the Wisconsin Constitution.”

The Wisconsin Constitution Protects Against “Irregular, Capricious” Meetings of Legislature

The Wisconsin Constitution Article IV Section 11 provides for a “special session” convened by the governor and a regular session as provided by statute, but the statute makes no mention of an “extraordinary session.” The legislature’s policy on extraordinary sessions, which curtail public notice and participation and suspend the regular rules of debate, was created by a rule of the legislature, not a statute.

Dane County Circuit Judge Richard Niess issued a temporary injunction to block the laws. “The bottom line in this case is that the Legislature did not lawfully meet during its December 2018 ‘Extraordinary Session,'” therefore violating Article IV of the constitution.

The judge made clear that Article IV was created by the people of Wisconsin in 1848 specifically to safeguard the citizenry from “irregular, capricious, precipitous and unpredictable meetings of the legislature,” in an era when irregular meetings were a regular occurrence, making public participation difficult.

“That the people’s liberty is imperiled by a legislature that can meet at will any time, with little warning and even less of a published agenda, was a genuine threat on the minds of the people in 1848,” wrote Judge Niess. “Through coiled reasoning, the legislature essentially adds language and meaning to the Constitution that the people of Wisconsin had not approved.”

The decision renders the three lame-duck laws and 82 nominees, including Scott Beightol’s appointment to the University of Wisconsin System Board of Regents, null and void. As CMD has reported, Beightol is a Republican attorney, who represents corporations against complaints of discrimination and sexual harassment, with no higher education experience.

Following the ruling, the governor took immediate action to pull Wisconsin out of a multi-state lawsuit that challenged the Affordable Care Act. Wisconsin’s former Solicitor General was a lead lawyer in the suit that resulted in a Texas federal court ruling that ACA was unconstitutional. The governor and the attorney general promised to pull the state out of the lawsuit during their campaigns, but were prohibited due to legislation put into action during the lame-duck session.

“We are pleased with the court’s careful, thorough analysis,” said Jeffrey Mandell, an attorney with Stafford Rosenbaum LLP, which brought the lawsuit on behalf of Wisconsin citizens and voters. “We agree with the court that the Legislature’s arguments in defense of the December 2018 Extraordinary Session are meritless. Because the December 2018 Extraordinary Session was unlawful, today’s result was necessary and appropriate.”

Democratic legislative leaders quickly pointed out that the judge’s injunction of the law that allowed the legislature to hire private attorneys to represent GOP legislative leaders was now null and void. “Wisconsin taxpayers should not pay one more cent to hire private attorneys to defend [Speaker] Robin Vos’ indefensible power grab,” said Assembly Democratic Leader Rep. Gordon Hintz, who requested that Vos terminate any and all payments to the outside attorneys, including the former Solicitor General Misha Tseytlin who was making $500 an hour.

“Rep. Vos and Senator Fitzgerald should immediately reimburse the taxpayers of our state for the money they spent intervening in this lawsuit and trying to defend their unconstitutional actions. It’s time for their abuse of power and fiscal irresponsibility to end,” said Rep. Chris Taylor of Madison.

Today’s ruling was on one of four challenging the lame-duck laws. The advocacy group One Wisconsin Now convinced U.S. District Judge James Peterson to block the early voting restrictions in January of this year. A lawsuit brought by a coalition of labor unions, including Service Employees International Union (SEIU) and the Wisconsin chapter of the American Federation of Teachers (AFT), argues that the lame-duck session stole power from the executive and gave it to the legislature, violating the separation of powers doctrine. The Wisconsin Democratic Party filed suit arguing that the lame-duck statutes violate free speech and equal protection guarantees.

As for Governor Evers, who was not a party in this lawsuit, he is getting on with governing and representing the will of the voters. Erin Grunze, the Executive Executive Director of the League of Women Voters of Wisconsin said that the people of Wisconsin were “entitled to a government that represents their interests transparently, welcomes citizens’ input, and respects the limits of its constitutional authority.”

Photo: On December 14, 2018, Scott Walker released a Venn diagram when he signed the lame-duck bills into law claiming that they did not curtail the powers of the new Democratic governor.