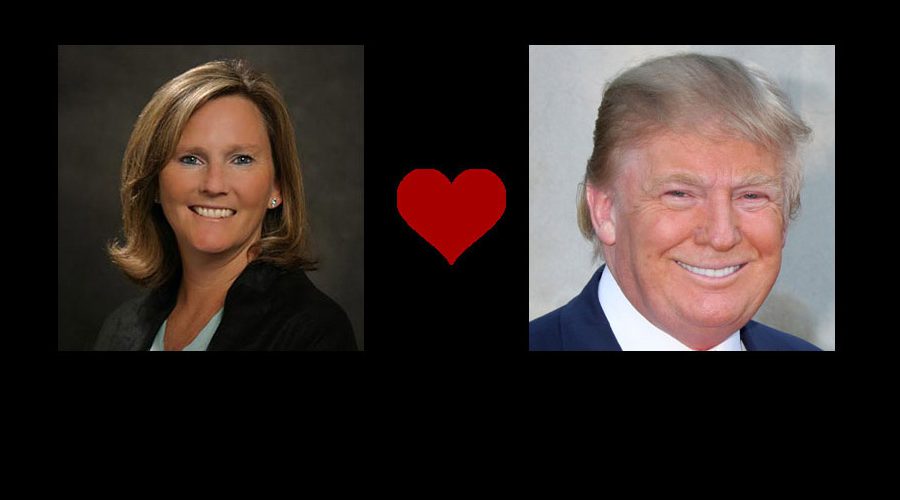 Just in time for Valentine’s Day, love is in the air as the American Legislative Exchange Council cozies up to the Real Donald.

ALEC and Trump are unlikely lovers. One gets excited about slamming borders shut, raising tariffs on imports, and promising massive infrastructure spending ($1 trillion in borrowed money says Steve Bannon), the other has never seen a free trade agreement it hasn’t embraced and objects to spending programs that might actually grow jobs.

But ALEC is casting doubts aside and is ready to guide Trump to mutual fulfillment.

This is a big change of heart for one of the nation’s largest associations of far-right politicians and corporate lobbyists.

No Trump backers were spotted at the ALEC meeting in San Diego in 2015. The Times of San Diego described how famed Fox pollster Frank Luntz asked the ALEC luncheon crowd at the Manchester Grand Hyatt:

“How many of you are supporting Donald Trump?”

“Crickets,” wrote the paper. “None of the hundreds of American Legislative Exchange Council members or guests, including more than 400 lawmakers, said a word.”

Moreover, ALEC stalwarts like ALEC President Leah Vukmir, a State Senator from Wisconsin, were part of a “never Trump” team that first endorsed Marco Rubio, before rallying behind Ted Cruz, helping to put Wisconsin into the unlikely Cruz column in the GOP primary.

My, have times changed.

“Now is our Time. And ALEC is Ready”

Recently, ALEC Executive Director Lisa Nelson told ALEC funders and members that she was thrilled to report that the Trump administration “does have the potential to be an ALEC administration. It is full of the people and ideas we’ve advanced since 1973…Now is our time. And ALEC is ready.”

As Trump garners headlines around the globe for governing by executive fiat, drafting unconstitutional religious tests for entrance into the united states and for big dollar plans to build a $25 billion dollar wall (and that is not even counting the cost of seizing private property), ALEC is cheering.

“In view of the incoming presidential administration’s focus on rolling power back to the states and the sheer number of ALEC alumni in the new administration, ALEC is the organization best positioned to bring policy experts and business leaders together for open and substantive discussions,” chirped Nelson in a December press release.

“ALEC policy experts spent the better part of December advising the transition. This month, they’ve educated incoming officials about regulatory barriers and burdens that disproportionately impact states. And, our policy experts have absolutely saturated the media with messages that advocate the free market and state control. In just the week leading up to the inauguration, ALEC had seven editorials on salient state policy printed around the country.”

One op-ed in The Hill is illustrative. In it, ALEC op-eds tell Trump how to fire federal workers he doesn’t agree with, even though ALEC touts union-busting “right to work” legislation to protect workers who “fear they may lose their jobs.”

Trump has promised to toss out the Affordable Care Act (ACA), a long desired goal of ALEC and the Koch team. ALEC has sponsored numerous bills encouraging legislators and governors to sue to block the ACA or reject Medicaid funding and leave millions without insurance. As CMD has reported, the Kochs have spent hundreds of millions backing groups to fight ACA and on political ad campaigns attacking Democrats over the ACA.

The big question here is whether Trump will keep campaign promises to ensure that the 20 million who have benefited from the ACA are covered or if he will yank the rug out from under them.

There are other areas of agreement moving at the federal level.

Abolishing the EPA: Two ALEC alumni Barry Loudermilk (R-GA) and Steven Palazzo (R-MS) are working with Rep. Matt Gaetz (R-FL) on a bill to “completely abolish” the Environmental Protection Agency, HR 861. This has long been a desire of ALEC which has engaged in a multi-year campaign on behalf of fossil fuel interests to tear down the EPA and advance retrograde policies like the repeal of President Obama’s Clean Power Plan and the repeal of state renewable energy requirements.

The Trump campaign called for the abolishment of the “Department of Environmental” and now the administration has moved to muzzle the EPA, stop the flow of grants to states, and Myron Ebell — the transition team leader for the EPA — is threatening to cut the size of the agency in half.

REINS Act: The Regulations from the Executive in Need of Scrutiny Act (REINS) Act (H.R. 26), introduced January 3 by former ALEC member Rep. Doug Collins (R-GA), quickly passed the House in early January. ALEC has a long standing resolution in support of the bill.

Peter Shane, at the Atlantic in The Quiet GOP Campaign Against Government Regulation, explains the deregulatory bill: “If enacted, no agency could issue a new regulation unless it amended or repealed some other rule or rules “to completely offset any annual costs of the new rule to the American economy.” In other words, if implementing a new safety rule imposes costs on the economy of $10 million per year, then the agency would have to rescind enough existing rules to offset those costs fully. But—and this is significant—it must do so even if the social benefits of the new regulation, say, $50 million in annual savings from reduced health-care costs, far outweigh the costs of rule compliance. This is cost-benefit analysis without due attention to the benefits.”

The bill amends the National Labor Relations Act and the Railway Labor Act to prohibit “security clauses” in contracts labor that require employees to either join a union or pay a fee as a condition of employment. This allows workers to “opt out” of paying any dues or fees to the union, but the union would still be required by law to cover the costs of collective bargaining, administering the resulting contract, and representing employees who have grievances under the contract and the employees would still receive all the benefits of unionization (pay increases, sick pay, vacation pay, union services and other benefits of the contract). The intent of the law is to bankrupt unions nationwide.

ALEC has long peddled this union busting bill and others as ways to defund and weaken unions, who provide funding and “boots on the ground” for the democratic party. On February 3 Trump press secretary Sean Spicer told reporters that Trump “believes in right-to-work. He wants to give workers and companies the flexibility to do what’s in the best interest of job creators.”

Keystone and Dakota Access Pipeline: On January 24, President Trump signed an executive order reviving the Keystone and Dakota Access Pipelines. The order invites “TransCanada Keystone Pipeline, L.P. (TransCanada), to promptly re-submit its application to the Department of State for a Presidential permit for the construction and operation of the Keystone XL Pipeline” and directs the State Department to “take all actions necessary and appropriate to facilitate its expeditious review.” It also reiterates that the pipeline company may, “secure access from an owner of private property to construct the pipeline and cross-border facilities described herein.” Trump touts enormous jobs numbers like 28,000 but the reality is that very few permanent jobs are created from these projects. KXL for instance would create 35 permanent jobs, according to State Department estimates.

On cue, ALEC cheered Trump’s executive order on the pipelines.

David Johnson contributed to this op-ed.