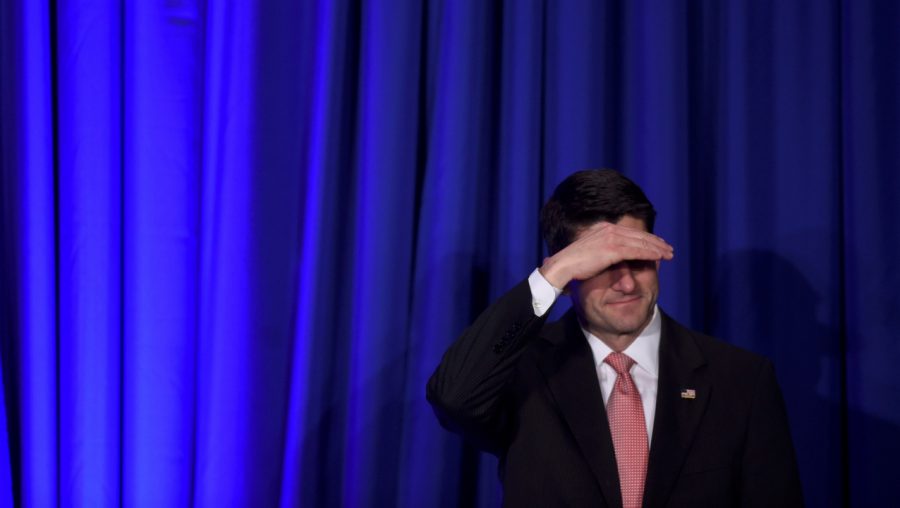 Just hours before House Speaker Paul Ryan held a press conference to sell his health care overhaul legislation — using a PowerPoint presentation mocked for misrepresenting basic facts — he was doing something he’s much better at: fundraising.

The two things were related. The Thursday morning breakfast fundraiser he attended was hosted by a lobbying firm working to unwind the Affordable Care Act on behalf of health insurance company Blue Cross Blue Shield, one of the big winners of Ryan’s proposed legislation.

The breakfast, according to an invitation, was sponsored by McGuireWoods PAC, the political action committee for the lobbying firm McGuireWoods. Blue Cross Blue Shield, an Anthem company, pays McGuireWoods $120,000 a year to lobby on changes to health reform, records show. Attendees of the event paid were asked to pitch in as much as $10,000.

Ryan’s American Health Care Act (AHCA), which rolls back most of the revenue-generating provisions of the ACA, reduces premium subsidies, and imposes deep cuts to Medicaid, has largely been panned by medical professionals, health policy experts, and political advocacy groups from across the ideological spectrum.

But the bill enjoys enthusiastic support from some corners of the health care industry — primarily health insurance firms and medical device companies that directly benefit from the legislation.

America’s Health Insurance Plans, the trade group that lobbies on behalf of health insurance companies, wrote a letter to Congress on Wednesday praising much of the AHCA.

The ACHA includes a special 30 percent premium surcharge insurers can charge anyone who has gone without health coverage for at least two months. The bill also reduces the types of medical coverage Medicaid policies are required to cover — the type of flexibility insurers have sought in order to cover less health care costs.

As we reported earlier this week, insurance lobbyists are particularly fond of a tax change made by the Republican health bill that removes limitations on deductions for executive compensation. That reversal will reduce the tax bill for health insurance companies while incentivizing higher pay for insurance employees.

The ACHA would also permanently repeal the 2.3 percent excise tax on medical device tax, which was imposed by Obama’s health reform law. AdvaMed, the lobby group representing the largest medical device firms, released a statement commending the Republican-led House Ways and Means Committee for the repeal of the tax.

While some media outlets praised Ryan’s “wonky” style and use of bar graphs to make his case for the bill on Thursday, many reporters noted that the speaker stumbled when asked basic questions about the legislation.

Ryan notably called the ACA system of younger, healthier people helping to subsidize the insurance of elderly, sick patients a “fatal conceit.” But that general principle — of high- and low-risk consumers alike pooling their resources — is a fundamental element of all health insurance programs. Ryan also “made a series of misleading statements,” noted Politico’s Danny Vinik, who pointed out that the speaker cherry-picked data to exaggerate ACA premium increases.

Despite the perception of Ryan as a policy expert — a brand carefully manufactured by friendly D.C. reporters — the speaker has devoted himself to relentless fundraising. Records show Ryan spent much of the year flying to resorts and huddling with lobbyists to raise huge amounts of cash to maintain his party’s control of the House of Representatives. The Team Ryan joint fundraising committee, hosted by McGuireWoods on Thursday morning, is allowed to raise as much as $244,200 per person.