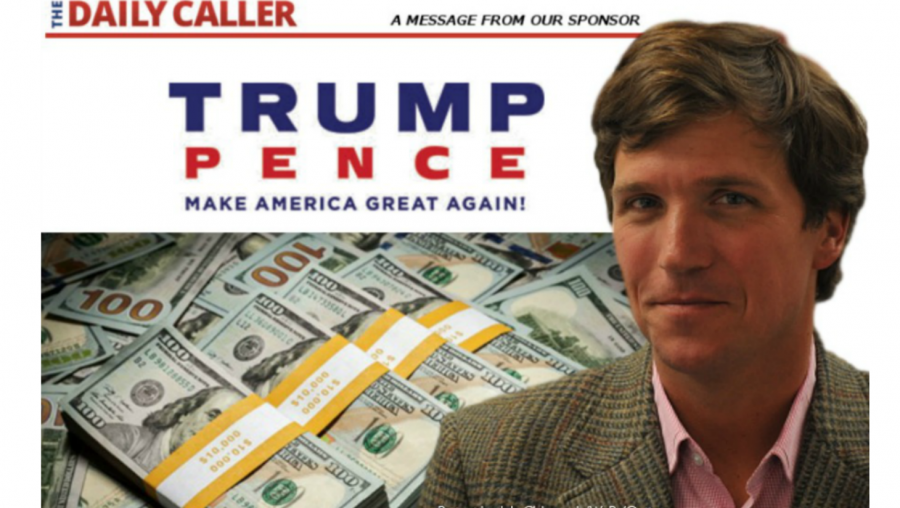 Each year, Tucker Carlson’s The Daily Caller marks “Equal Pay Day” by publishing a piece attacking the idea that women are paid less than men or trying to rationalize the pay gap.

This year, The Daily Caller criticized Google for highlighting the pay gap through Cheryl Sandburg’s Lean In initiative and a Funny or Die video about women being paid 20% less than men.

The piece, attributed to Carlson’s non-profit charity, the Daily Caller News Foundation, was illustrated with a photo of a woman “showered with money.”

The author, a recent college grad who is a Breitbart alum and former Koch intern, noted without irony that “the so-called wage gap only makes sense if hours worked, years of experience, and education of male and female laborers are considered.” It might help to read that “critique” again.

For good measure, the Daily Caller ran a second piece that day, a reprint of a blog claiming Elizabeth Warren paid women less than men. That spin bounced through the rightwing echo chamber from the Washington Free Beacon to the Daily Caller, Breitbart, and Fox, before it was refuted by Warren’s payroll data. No correction was issued by any of the outlets that spread the attack on Warren. (The Beacon has described itself as an “aerial hunting operation” and it has attacked watchdogs like the Center for Media and Democracy.)

But that’s par for the course for The Daily Caller. Though its website has more than 16 million visitors and a huge staff of writers who produce content for it through its non-profit the Daily Caller News Foundation, the site routinely relies on rightwing bloggers and groups to provide many of the “facts” it asserts as true in its news stories.

During the presidential election season, The Daily Caller was rife with articles attacking Hillary Clinton, including a piece by the Independent Women’s Forum (IWF) that reinforced Trump’s nicknaming Clinton as “crooked,” which some might consider projection given his documented history of cheating contractors out of their full pay or the Trump University scam or more.

IWF’s smear piece published in The Daily Caller in the run-up to the presidential election could have been written this year about the policymaker-in-chief: “The bigger problem is that she doesn’t think the rules should apply to her in the first place. HRC – or Her Royal Crookness – sees herself as a Queen, existing in a realm above the minions who work for her, and even higher above her lowly subjects. Queens don’t have to bother with the system meant for ordinary schlubs. She doesn’t have to accept facts or findings; we peons are expected to accept her version of events, rather than trust our own lyin’ eyes.”

IWF is a 501(c)(3) non-profit charity that is theoretically barred from intervening in an election by criticizing the character of a candidate. That story by the head of IWF concludes with: “Americans recall that we are supposed to be a nation of laws, after all, and those laws are meant to apply to everyone, even those with titles like Secretary or Senator. That’s bad news for Her Royal Crookness, Hillary Clinton, who epitomizes the elitism that Americans resoundingly reject.” IWF has not issued, and The Daily Caller has not published, a follow-up on that take in light of Trump’s acts as president.

Last summer, CMD released a major report detailing IWF’s history and role in the War on Women, a story that was broken by Joan Walsh in The Nation. CMD also documented that almost all of the publicly known funders of the IWF”s affiliated (c)(4), the “Independent Women’s Voice,” were men. CMD also filed an FEC complaint against IWV last November contending that the group violated election laws, which IWV denies.

CMD also documented how as IWF was claiming there was no “war on women,” IWV was running ads and doing calls to aid politicians like Todd “Legitimate Rape” Akin.

Perhaps it should come as no surprise that IWF has sponsored a forum where its panelists contended that “rape culture statistics have been blown out of proportion in the United States, and that this is largely a product of the media’s focus on rape and sexual assault.” That’s the description from The Daily Caller’s coverage of the event. Another piece, titled “Restraining Orders Hurt Women” also credited IWF’s analysis.

IWF, by the way, has opposed the Violence Against Women Act (VAWA) for years and its renewal, despite the strong support for its protections by groups that represent women’s interests in not getting killed by a violent partner. VAWA helps fund a coordinated community response to help women who are beaten, raped, or stalked–and it helps ensure that those restraining orders are enforced across jurisdictions to help protect women where ever they may flee for safety.

IWF’s out-of-step assertions as a mainstream “women’s voice” have found a ready distribution channel in The Daily Caller. Take, for example, an article headlined “Stay vertical a bit longer, ladies: Study claims men as winning the game of love,” which featured IWF’s claims about marriage and sex. IWF’s rep expressed concerns about women engaging in “commitment-less sex” because “when it comes to marriage there is certainly a marketplace and many factors have changed that marketplace.”

That Daily Caller story also cited the controversial academic Mark Regnerus, who as CMD recently noted, has “claimed, for example, that ‘liberal’ and ‘very liberal’ women want to have much more sex than other women [and to] speculate that liberal women want more sex than other women because they’re not religious enough. Specifically, Regnerus theorizes that sex provides the “transcendent” feeling others achieve through faith – that these liberal women are getting in bed, as it were, what they’re not getting in church. ‘Basically,’ Regnerus writes, ‘liberal women substitute sex for religion.’ (Insert obligatory ‘Oh, God! Oh, God!’ joke here.)”

It’s not just sex on the brain of The Daily Caller, which regularly features swimsuit models to peddle its spin, like its “story” minimizing the effects of climate change on the day Trump announced the U.S. would withdraw from the Paris agreement: “These 14 Models Prepared for Trump to Drop the Climate Deal.” The text accompanying the slideshow stated: “As we approach President Trump’s decision on the Paris climate accord, we decided to turn our attention to the models out there who have been hoping for warmer temperatures.”

The Daily Caller’s news presentation has sought to undermine grassroots efforts to secure paid leave and increase the minimum wage. One example is their story “Social Justice Activists Want Olive Garden To Be Nicer to Cows Before Serving Them As Meatballs.” That story emphasized that “Thus far, the coalitions’ campaign is not going well. The group’s attempt to set up meetings with Darden in the fall was an abysmal failure. The company responded with a letter rebuffing meetings and generally rejecting the demands set forth.” Other pieces pushed the rightwing narrative that requiring paid sick leave and increasing the minimum wage would lead to higher unemployment rates.

The Daily Caller has even written against maternity leave pay. One such piece was written by the Independence Institute, which is part of the State Policy Network: “Mandated Paid Maternity Leave: A Bad Idea for Women.” That’s not the view of most women or even of most CEOs, as CMD revealed last year after it was given a detailed survey by Frank Luntz’s group showing overwhelming support for maternity leave, paid sick leave, raising the minimum wage.

That survey of 1,000 executives was commissioned to help the U.S. Chamber of Commerce and its global corporate funders and its state affiliates in their efforts to defeat popular paid sick leave policies and efforts to increase the minimum wage. Luntz’s team said the problem was business leaders have too much “empathy.”

Another Daily Caller piece amplified the assertions of the controversial PR flack Rick Berman–who 60 Minutes helped dub “Dr. Evil”–that “The $15 Minimum Wage Could Lead to More Youth Crime.” Like IWF, the claims of Berman’s front groups get plenty of play in The Daily Caller. CMD recently detailed how Berman’s front groups are funded not just by corporations but also with millions from the rightwing Bradley Foundation, which also funds IWF’s promo of “free market” alternatives to paid sick leave and raises in the minimum wage. CMD also published the audio of Berman bragging about his tactics: “I get up every morning and I try and figure out how to screw with the labor unions” and “marginalize the people on the other side….”

CMD has previously refuted to The Daily Caller’s claims about ALEC, the American Legislative Exchange Council, and its assertions on climate change and fracking, but has not responded to every erroneous claim the outlet has made about CMD. Among other things, like other rightwing outfits, the Daily Caller has repeated the claim that CMD is “Soros-funded,” even though CMD has pointed out that it is not funded by George Soros and was awarded a grant from the Open Society Institute several years ago as part of a set of grants to examine national security surveillance of Americans, along with a grant to the Kochs’ Cato Institute–which the Daily Caller has never called “Soros-funded.”

During CMD’s investigation of IWF, its researchers noted the way The Daily Caller was readily echoing IWF claims on numerous issues. That led CMD to take a closer look at The Daily Caller’s operations, which resulted in the investigation reported by the Washington Post on June 2, 2017. More details about that research, which showed that Tucker Carlson’s Daily Caller had received a six-figure sum from the Trump Campaign in the weeks before the election, are available here.

As Callum Borchers noted in the Washington Post story, tax experts have expressed concerns about how Tucker Carlson’s charity benefits his for-profit media outlet, The Daily Caller, which profits from the web traffic and list-building resulting from its content, a substantial portion of which is provided by the non-profit. CMD has also noted that Carlson did not tell FOX News viewers that he had financially benefited from the Trump Campaign cash, as he critiqued other outlets for their purported bias against Trump or when he interviewed Trump for a primetime show on FOX this spring.

How much Carlson received in pay or bonuses from The Daily Caller last year after it received the money from the Trump Campaign is not known.