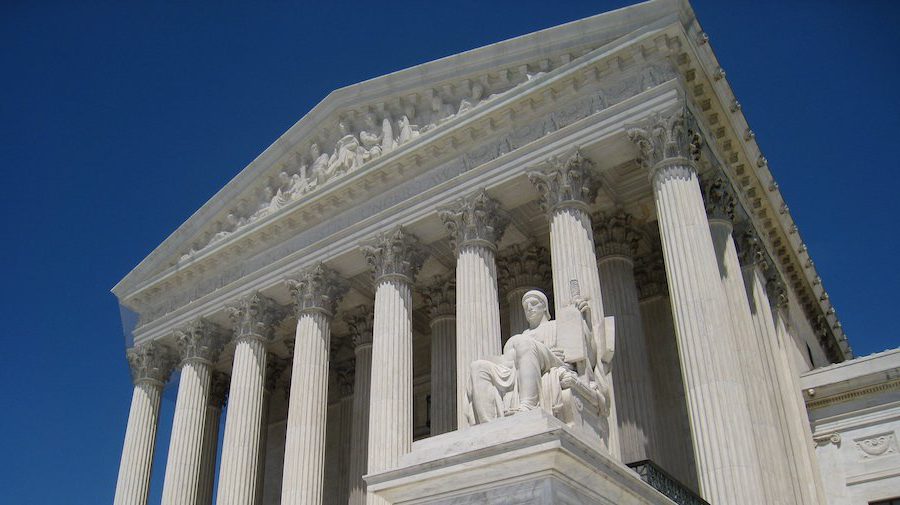 A case challenging the partisan gerrymandering of Wisconsin legislative districts will be heard by the U.S. Supreme Court on October 3. The court has a historic opportunity to curb the high-tech, gerrymandering that locks in one party control for at least a decade.

Briefs have been filed on both sides, including one from the Center for Media and Democracy, and now a new poll shows that 71 percent of voters want to remove partisan bias from redistricting even if it means their party may not win as many seats.

The voters have it right. They know that sophisticated, computer-aided gerrymandering, which can be undertaken by either party, strikes a mortal blow to democracy and competitive elections. The polling shows that common sense voters strongly prefer “free and unbiased elections” rather than what is best for their own political party.

As tens of thousands of Wisconsinites circled the capitol in the stark winter of 2011 protesting Governor Scott Walker’s bill to dismantle public sector unions, they did not know that Republican staffers were working night and day in the glass bank building overlooking the square to gerrymander the state and ensure GOP control of the legislature for the next 10 years.

In 2016, the U.S. District Court for the Western District of Wisconsin struck down maps drawn by Wisconsin Republican leaders in the 2011 Act 43 law. A three judge panel, with two judges appointed by Republican presidents, found that the Wisconsin legislature had gone too far, violating voters’ rights under the first and fourteenth amendments to the U.S. Constitution.

The impact of the legislative maps drawn in secrecy at the law firm Michael, Best & Friedrich, across the street from the capitol, has been profound. “At a statewide level, Wisconsin is a quintessential battleground where races are often decided by only a few percentage points. Contrast that to the state assembly map the Republicans drew: In 2012, they won 60 of the 99 seats in the Wisconsin Assembly despite winning only 48.6% of the two-party state-wide vote; in 2014, they won 63 seats with only 52% of the state-wide vote,” explains the Brennan Center.

The SCOTUS brief from the Wisconsin voters challenging these maps is asking the court to put an end to this type of extreme gerrymandering.

“As the record in this case makes clear, partisan gerrymanders have become more common, more severe, and more durable in their effects since this Court last considered their constitutionality more than a decade ago. This is the product of better map-drawing technology utilizing more sophisticated voter data about an increasingly polarized electorate. The result, in too many states, has been a subversion of democracy, as officeholders have wrested power from voters. As Judge Niemeyer put it recently, ‘The problem is cancerous, undermining the fundamental tenets of our form of democracy.’ Benisek v. Lamone.” Read the full brief here.

At trial, experts described how GOP aides relied upon experts, computers, and sophisticated statistical analyses to “crack and pack” districts, so they increasingly skewed Republican. Multiple draft maps were produced with the aid of Political Science Professor Roland Keith Gaddie of the University of Oklahoma.

Now Gaddie and a group of political science professors in a neutral brief are urging the Supreme Court to take action. Their brief asks the court to “adopt an articulable standard for adjudicating partisan gerrymandering claims. Social science tools now allow courts to diagnose partisan gerrymanders with accuracy and precision. They also allow courts to distinguish ordinary, acceptable politicking from conduct that rises to the level of unconstitutional discrimination against voters based on their political views.” If the court doesn’t act, politicians will have “free rein” to violate the rights of voters, say the political scientists. Read their full brief here.

Other briefs filed with the court highlight the fact that both Democratic and Republican voters can be disadvantaged by hyper-partisan state legislators, and prominent Republican politicians are weighing in. U.S. Senator John McCain (R-AZ) joined Sheldon Whitehouse (D-RI) to argue in a brief: “The increase in partisan gerrymandering . . . distorts our representative democracy and pollutes Americans’ faith in their political institutions.” Read the full brief here.

Former Governor Arnold Schwarzenegger (R-CA) joined with a bipartisan group of state officials from across the nation. He stated: “Thirty years ago, my hero, Ronald Reagan, called partisan gerrymandering ‘antidemocratic and un-American.’ And it’s only gotten worse since then. It’s time for the Supreme Court to step up and rein in this corrosive, rigged practice that undermines our leaders’ ability to come together as Americans and solve our pressing challenges.” Read the brief here.

On the flip side, multiple briefs have been filed by Wisconsin Republicans and their allies, including Wisconsin Manufacturers and Commerce and the Bradley funded legal team at the Wisconsin Institute for Law and Liberty. In general, these briefs cherry pick races and plow the same ground to argue that democracy and competitive elections are flourishing in Wisconsin.

A brief filed on behalf of the GOP members of the Wisconsin State Legislature by prominent attorney Paul Clement paints a of picture of Wisconsin as a robust democracy where voters weigh numerous factors before voting for candidates. So why is one party winning so many races? It’s not the gerrymander says Clement, “for any number of reasons, more voters found the Republican candidates more attractive,” pointing to 75 contested elections where voters weighed the pros and cons of the candidates.

The Center for Media and Democracy’s response to the Clement brief points out that the legislature “argues that the power of incumbency, differences among individual candidates, and other factors drive election results. But actions speak louder than words. In drafting Act 43, the Legislature wholly ignored the factors it now applauds” and instead “used reliable statistical analyses of historical data to project the durability of the Republican legislative majority under the Act 43 map against various possible shifts in relative party strength.”

Another brief filed by Wisconsin educators and environmentalists explains that the impacts of the gerrymander go far beyond elections into public policy. “The gerrymandering has enabled the Legislature to pursue a narrow partisan agenda that has undermined values and policies long held by a bipartisan majority of Wisconsin voters,” they write. “Since the adoption of the State’s redistricting plan in 2011, the longstanding bipartisan consensus on many state policies has been upended and replaced with partisan policies that are not supported by the Wisconsin public at large.” The brief discusses in detail the dismantling of Wisconsin’s prized public education and university system, the collapse of the regulatory structure protecting the state’s natural resources and wildlife, and the destruction of the state’s non-partisan clean elections board. Read the brief here.

In total, 18 amicus briefs have been filed in support of the Wisconsin gerrymander largely from Republican party organizations, like the RNC, NRCC, RSCC, Republican politicians, Republican state legislatures, and Republican campaign funders like Wisconsin Manufacturers and Commerce (WMC). Notably one of the attorneys on the WMC brief is Eric M. McLeod, the former Michael Best and Friedrich attorney who garnered a fine for $17,000 by another federal panel reviewing the maps for his “sandbagging, hide-the-ball trial tactics” and his refusal to cooperate with discovery. The computers used in the gerrymander were eventually turned over, damaged and with files deleted.

In contrast, the 32 amicus briefs in support of the Wisconsin voters are from legal scholars, political scientists, historians, and other academics along with Republicans and Democrats at all levels of government, civil rights groups, voting rights groups, and good government groups like Common Cause and the League of Women Voters. You can find all the briefs on the Campaign Legal Center’s website.

The Lawyers: Will it be Paul Smith vs. Paul Clement?

Voters in Wisconsin who don’t believe the rules should be rigged to give one party imperial power, will have Paul Smith, “one of the biggest legal guns in the country” of the Campaign Legal Center to represent them.

Smith told the New York Times in June, “Partisan gerrymandering of this kind is worse now than at any time in recent memory. The Supreme Court has the opportunity to ensure the maps in Wisconsin are drawn fairly, and further, has the opportunity to create ground rules that safeguard every citizen’s right to freely choose their representatives.”

Arguing on behalf of the State of Wisconsin is Misha Tseytlin. Before taking the job as Wisconsin’s first Solicitor General (a new title granted by Attorney General Brad Schimel), Tseytlin made a name for himself battling the Obama administration’s Clean Power Plan, geared toward reining in dangerous carbon pollution. In private practice, he worked for Gibson, Dunn & Crutcher, a law firm representing big energy clients like Chevron in its battle against a multi-billion dollar judgement for polluting the Ecuadorian rainforest.

The State of Wisconsin asked SCOTUS to divide its time so that Paul Clement can argue 10 minutes and bring some star power to the state’s case. Clement is a native Wisconsinite from the town of Cedarburg. He clerked for the late Supreme Court Justice Antonin Scalia and later served as the 43rd Solicitor General under President George W. Bush.

Clement is known for defending high-profile, politically divisive Republican causes. He represented 26 states in a challenge to President Obama’s 2010 healthcare law and defended Arizona’s controversial, anti-immigrant SB1070, which would have required immigrants to carry registration papers. Clement also fought to preserve the federal law that defined marriage as between a man and a woman, known as DOMA.

Stay tuned, this historic case has the potential to curb extreme gerrymandering by any political party and let voters pick their representatives not the other way around.

The Center for Media and Democracy is participating in the Fair Maps Coalition, launched by the Fair Elections Project, which organized the Whitford lawsuit. CMD’s David Armiak contributed to this article. The Coalition is having a send-off party for the plaintiffs on Sunday, October 1, at 5 p.m. at Plymouth Church on Milwaukee’s east side.

To learn more about the case see “The New Front in the Gerrymandering Wars, Democracy vs. Math” in the New York Times magazine and plaintiff Bill Whitford in Time magazine.