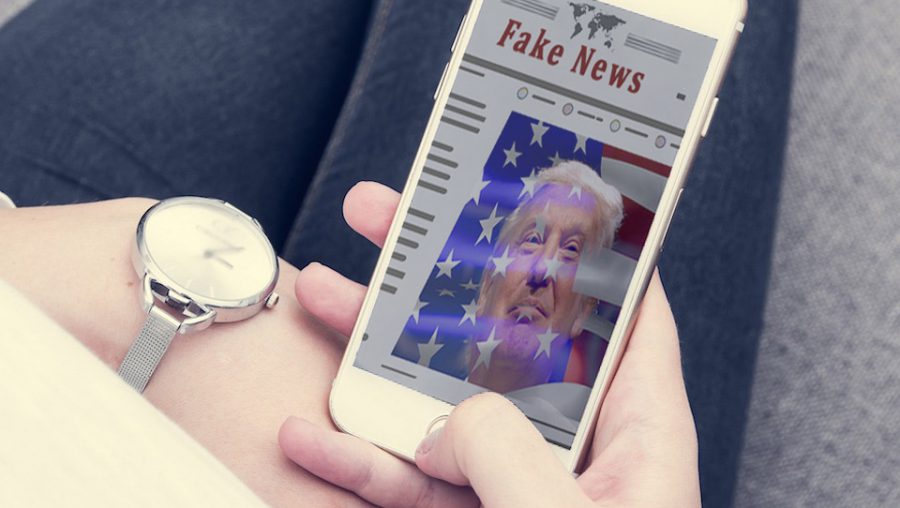 Since the 2016 election there has been a cacophony of opinions but few facts about fake news–especially from Donald Trump.

Trump has labelled a litany of well-sourced reports critical of him or his administration “fake news.” Some of his favorite targets? CNN and MSNBC reporting on whether or not the Trump campaign worked with Russia to influence the 2016 election, and NBC reporting on his desire to build up the nuclear arsenal. In that instance, Trump suggested NBC’s FCC license should be challenged.

Trump has created more than a little “fake news” himself. From his first days when he claimed that inaugural crowds were “the biggest ever” and “3 to 5 millions illegal voters” helped give Hillary the popular vote, the lies and misrepresentations have come in so thick and fast that news outlets have assigned reporters to track and tally them.

But the issue of most concern to the the public, criminal and Congressional investigators is the role that fake news may have played in the 2016 campaign.

In the summer of 2016, fake new sites and fake news stories were weaponized into a pounding rotation on the Internet. Most of these stories slammed Hillary Clinton or supported far right positions being pushed out by Trump and his campaign apparatus.

Data on this fake news assault on the voters is only now becoming available. More alarming still is the evidence that this arsenal of fake news stands ready to defend the Trump White House at any cost, including from Special Counsel Mueller’s investigation.

One year after the election, a few data points on the barrage of propaganda and disinformation utilized in the 2016 campaign is finally becoming available.

According to an Oxford University study of Twitter traffic during the campaign: “Voters in 11 swing states in last year’s presidential race received more fake, junk and hyper-partisan information over Twitter than reliable, professionally produced news in the 10 days before the election.” In three key states the researchers found “that fake and junk news constituted 40 percent of the sampled election-related tweets that went to Pennsylvanians, 34 percent to Michigan voters and 30 percent to those in Wisconsin;” states won by Trump with razor thin margins.

Facebook founder Mark Zuckerberg initially dismissed the idea that his social media empire was used by the Russians to spread propaganda. But in October 2017, Facebook was hauled before the U.S. Senate’s Crime and Terrorism Subcommittee and issued new estimates that some 126 million people saw the fake news promulgated by Russian sources via Facebook. That is about half of the American electorate eligible to vote.

Twitter testified that it had identified 37,000 Russia-linked accounts, which tweeted 1.4 millions times in the months before the election, and Google testified that Russian agents uploaded more than 1,000 videos to YouTube using 18 channels. This is likely the tip of the iceberg. (You can access this testimony here.)

Virginia Senator Mark Warner, the top ranking democrat on the Senate intelligence committee, says that the Kremlin paid an army of more than 1,000 people to create fake anti-Hillary Clinton news stories targeting key swing states. Russia is also known to have used computer commands known as “bots” to dramatically heighten the reach of negative or fabricated news about Clinton. One research study indicated that one in five election related tweets were generated by bots.

This arsenal of fakery is not only being looked at by Congress. Multiple new reports indicate that the FBI and the Department of Justice are exploring whether the Trump campaign’s digital operation worked with Russia’s cyber operations to aid with voter targeting.

Although the results of these investigations may not be available for some time, what is clear is that in the era of social media “fake news” elevated on massive commercial platforms is emerging as a weapon of choice for sophisticated campaign and election operatives in the United States as well as overseas hostile powers seeking to interfere in elections.

And, as the first plea agreements are reached that shed light on the campaign’s conversations about the Russians, that multi-million-dollar fake news machine is already laying down fire in defense of a White House under investigation.

SOME FACTS ABOUT FAKE NEWS

When Trump won the nomination in July 2016, he had “no money, no people and no organizational structure,” wrote Forbes. Son-in-law Jared Kushner stepped in and “managed to assemble a full blown presidential campaign on a shoestring using technology and won. That’s a big deal,” Google billionaire Eric Schmidt said admiringly.

Kushner had a lot of help. Trump senior advisor Steve Bannon and billionaire financier Robert Mercer had spent tens of millions learning how to manipulate the news and use powerful social media platforms to push out their favored narratives.

The duo collaborated on at least five media related ventures between 2011 and 2016, including Breitbart News Network, Cambridge Analytica, and the Government Accountability Institute (GAI). GAI is headed by Breitbart editor Peter Schweizer whose book “Clinton Cash,” originated the phony narrative that Clinton alone was responsible for the sale of a portion of U.S. uranium production to a Canadian company owned by the Russians.

Together these institutions created “a power base aimed at sowing distrust of big government and eroding the dominance of the major news media,” wrote the Washington Post.

With millions of unique visitors, Bannon’s Breitbart News outpaced the Washington Post and Fox News in measures of online visitors and page views, and is a huge weapon in the Trump arsenal. Harvard researchers put Breitbart at the center of an entire “media ecosystem.” “Rather than ‘fake news’ in the sense of wholly fabricated falsities, many of the most-shared stories can more accurately be understood as disinformation: the purposeful construction of true or partly true bits of information into a message that is, at its core, misleading,” say the researchers. Breitbart’s framing of immigration in terms of “terror, crime, and Islam” worked symbiotically with Trump messaging on the issues.

A series of articles in the Guardian pulls back the curtain on the firepower of another Bannon-Mercer weapon in the Trump arsenal, Cambridge Analytica. According to the Guardian, the data firm specializes in “‘election management strategies’ and ‘messaging and information operations,’ refined over 25 years in places like Afghanistan and Pakistan. In military circles this is known as ‘psyops’ – psychological operations” or, as the Guardian puts it, “mass propaganda that works by acting on people’s emotions.”

“Cambridge Analytica makes the astonishing boast that it has psychological profiles based on 5,000 separate pieces of data on 220 million American voters,” writes the Guardian. Using the platforms provided by Facebook and Twitter, Cambridge Analytica uses its trove of psychological data to target information to individual users on social media, for pennies on the dollar compared with mass media advertising. In previous decades, misleading claims in a typical TV ad buy would be seen by millions of people who could challenge them. Today, they may only be seen by individually targeted voters on their personal devices.

Forbes’s glowing profile of Kushner post-election revealed that he relied on RNC data and Cambridge Analytica to underpin Trump’s massive digital operation. By the end of the campaign “the data operation dictated every campaign decision: travel, fundraising, advertising, rally locations,” the topics of speeches and key words used in those speeches. News reports indicate at least 13 Cambridge Analytica staff worked inside the offices of the campaign’s data operation located in San Antonio, but how much work the organization did for the Trump campaign and how much it was paid is a matter of dispute.

The Trump campaign itself waged sophisticated partisan warfare to “divide and conquer” and suppress the vote in key swing states, placing hundreds of thousands of ads on Facebook that were constantly tweaked to micro target voters.

BusinessWeek quoted an unnamed senior member of the Trump campaign explaining: “We have three major voter suppression operations under way.” These were, writes the magazine, “aimed at three groups Clinton needs to win overwhelmingly: idealistic white liberals, young women, and African Americans.” For instance, Clinton’s 1996 suggestion that some African American males are “super predators” was “the basis of a below-the-radar effort to discourage infrequent black voters from showing up at the polls–particularly in Florida.” Cambridge Analytica was hired by a Republican PAC to help with the voter suppression efforts reports the Guardian. Similarly, divisive messaging was coming in from the Russians focused on guns, gays, race and religion (including ads in which Jesus lines up against candidate Clinton).

The Russians “understood that the algorithms that you use tend to accentuate content that is either fear based or anger based,” said Rep. Adam Schiff of California, ranking member of the House Intelligence Committee. “That helps it pick up an audience and go viral and be amplified.”

As more evidence emerges that the Russians engaged in sophisticated voter targeting, many on Capitol Hill are raising questions. “I think the Russians had help,” said Rep. Jackie Speier, a member of the House Intelligence Committee. “I’ve always wondered if Cambridge Analytica was part of that.”

McClatchy and other news outlets are reporting that investigators at the House and Senate Intelligence Committees and the Justice Department “are examining whether the Trump campaign’s digital operation–overseen by Kushner–helped guide Russia’s sophisticated voter targeting and fake news attacks on Hillary Clinton in 2016.”

In October 2017, Trump claimed to have created the term “fake news.” Although Merriam Webster quickly set this bit of fake news straight–citing three examples from American newspapers in 1890 and 1891–there is no doubt that Trump has weaponized the term as a political tool, one which could yet have great significance for his presidency and specifically, Special Council Mueller’s investigation into potential collusion between the Trump campaign and the Russians.

The Bannon-Mercer-Kushner propaganda machine stands ready to aid the Trump team as new facts emerge and as the first charges related to the “Russiagate” investigation are filed.

On October 30, 2017 Mueller garnered his first guilty plea from Trump campaign advisor George Papadopoulos for lying to the FBI about his efforts to set up meetings between the Trump campaign and Putin representatives.

Trump immediately called the aide a “liar” and the media coverage “fake news.”

A quick check of the Twittersphere found both Russian trolls and Breitbart News pushing out stories alleging “collusion” between Russia and Hillary Clinton over the 2010 sale of uranium rights, a false narrative first developed by Bannon’s team in the book “Clinton Cash.”

The new twist? Allegations of a “cover-up” of the uranium story by Bob Mueller’s FBI. This was quickly followed by a call by some members of Congress for Mueller to step down. 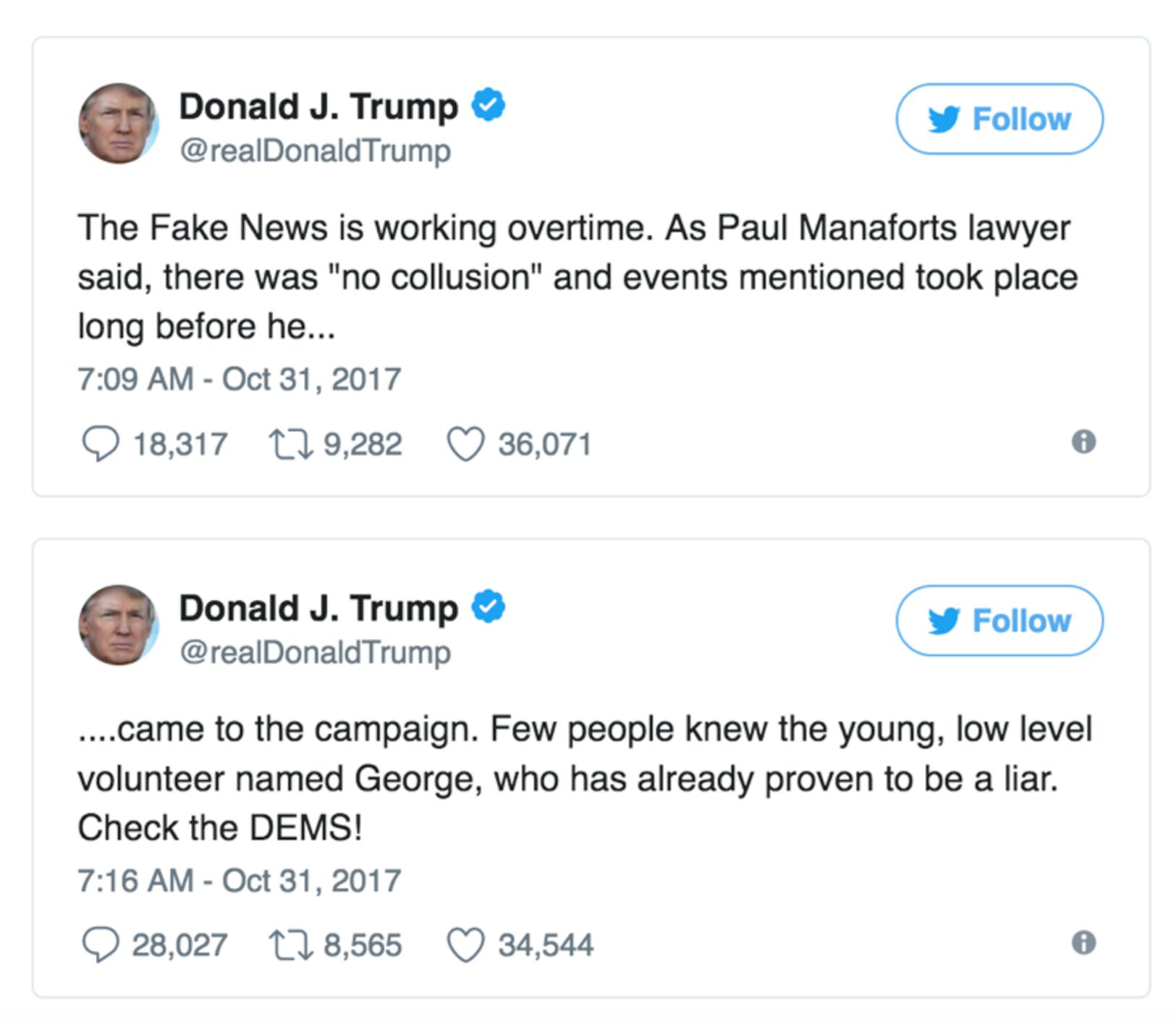 Long before “fake news” became one of Trump’s go-to lines of attack against facts, the Center for Media and Democracy secured the website address “fakenews.org.” For years CMD has been exposing fake news–for example, when the George W. Bush administration deployed “Pentagon Pundits” to sell the war in Iraq or when corporate PR teams created “video news releases” about their products for networks to broadcast without disclosure.

Richard Eskow contributed to this report.