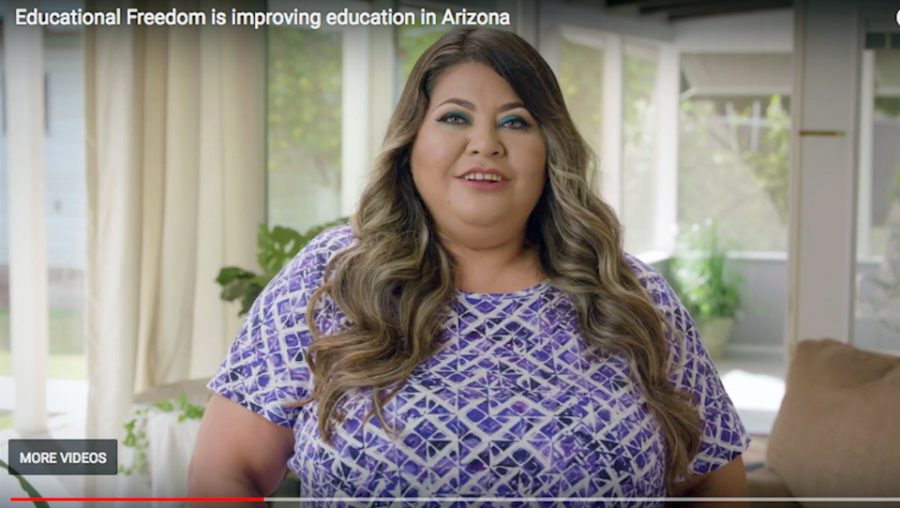 A full year in advance of a historic showdown on school vouchers in Arizona, the Kochs are already ladling on the cash. Through their Latino front group, Libre Institute, they have launched a six figure ad campaign targeting Arizona moms on one of the Kochs’ favorite topics, school vouchers.

The TV ads feature a variety of Latino and Anglo “moms” singing the praises of school choice; the mailings feature cookie cutter “happy families” still featuring the “Istock” watermark. The campaign is an early attempt to sway voters who will decide whether or not to expand vouchers statewide in November 2018 when Proposition 305 appears on the ballot.

The ads encourage people to go to the website, Arizonaschoolfacts.com emblazoned with the motto “Stand with Arizona’s Children.” The website fails to mention that it is sponsored by David and Charles Koch, two of the richest men in the world, who believe that transforming the public school system into for-profit money making operations is the “choice” Arizona moms should be making.

In the interest of transparency, shouldn’t the outreach begin with “Hola! Somos los hermanos Koch”?

Here are a few facts about vouchers not featured on the Libre Institute’s “school facts” website.

Vouchers originated in Southern states as a way of getting around the Brown vs. Board of education series of Supreme Court decisions requiring the desegregation of schools, as CMD has detailed.

Vouchers were taken up and promoted by the Koch-funded American Legislative Exchange Council in the 1980’s and was implemented into law for the first time by Wisconsin Governor Tommy Thompson, a big ALEC booster. At ALEC today, private companies like the scandal-plagued K12 Inc. — which is supported by U.S. taxpayers and pays its CEOs millions in annual salary ($4 million in 2017 ) — are pushing hard for the privatization of U.S. schools so they can rake in more profits.

In April 2017, the Arizona Legislature narrowly passed SB 1431, which is geared to expanding the state’s small “Empowerment Scholarship Account” program, to all 1.1 million school children over time.

Empowerment Scholarship Accounts (or what ALEC calls “educational savings accounts“) work like school vouchers because they siphon off public taxpayer money for private and religious schools. The “accounts” were developed by voucher proponents as a way of getting around constitutional prohibitions on the use of public money for religious schools.

The bill was put forward by ALEC member and State Senator Debbie Lesko. A passel of interlinked right-wing groups, including the Koch’s American’s for Prosperity astroturf group, the DeVos American Federation for Children, Jeb Bush’s Foundation for Excellence in Education, the Arizona Free Enterprise Club, the Arizona School Choice Trust, advocates for religious schools, and a group of Bradley-funded groups like the Goldwater Institute and the Cato Institute weighed in. (The $900 million Milwaukee-based Bradley Foundation has spent hundreds of millions advancing private and religious school vouchers.)

Arizona Gov. Doug Ducey signed the bill into law on April 6, 2017. On cue, U.S. Secretary of Education Betsy DeVos called the bill a “big win” for students and parents. While vouchers were initially billed as a social mobility ticket for minority or disadvantaged students, “universal vouchers” for all families — rich and poor — attending both private and religious schools, are now openly the goal of ALEC and most school voucher proponents.

As part of a deal to swing key GOP support the Arizona program was capped at 30,000 students, but the cap is clearly intended to be temporary. On passage of the bill, the Goldwater Institute immediately sent out a victory email stating: “Fifty years in the making, and tonight we closed the deal! Universal education savings accounts. There is a cap at 5,000 new kids per year; we will get it lifted.”

But that was not the end of this story.

Public school advocates formed Save Our Schools Arizona and organized to put the issue to a state-wide referendum. Arizona law allows for a “veto referendum” on laws passed by the legislature if opponents gather the requisite signatures to put the issue on the ballot.

Save Our Schools filed 111,540 signatures with the Secretary of State, much more than the 75,000 required. Secretary of State Michele Reagan announced that referendum proponents submitted a sufficient number of signatures and certified the measure for the ballot as Arizona Proposition 305 on September 8, 2017.

Proponents of the expanded voucher program resorted to classic tactics to attack Save Our Schools and its allies, including ethics complaints against signature gatherers (who allegedly failed to check the volunteer box on the form), robocalls, and lawsuits.

In August, the Kochs’ Americans for Prosperity filed suit alleging irregularities with the signature collection process; this suit was quickly dismissed by the courts, but the same team filed a second suit on similar grounds, which is still pending. Moreover, AFP appears ready to primary the few Republicans who voted no on the voucher expansion. Rep. Heather Carter, who voted no on expansion faces competition by high-school teacher Brian Lesinski. Lesinski said he was inspired to run about a year ago, after completing a “leadership academy” training sponsored by Americans for Prosperity Foundation.

Rather than throwing up their hands and surrendering to the outside dark money forces already invading their state, Dawn Penich-Thacker, Save our Schools Arizona Co-founder and spokesperson tells CMD they are ready to battle the Kochs.

“The Kochs and their affiliates have poured millions into Arizona over the years, yet 95 percent of families still choose public schools. Just this month, every single public school bond and tax ballot measure in the Phoenix metropolis passed by margins of two to one,” said Penich-Thacker.

In state after state, citizen groups have faced big money opposition and won, most recently in Colorado where a complex web of dark money groups and a passel of institutions funded by the Bradley Foundation attempted to capture school boards to advance vouchers at the local level and failed spectacularly. While the Save Our Schools coalition found the volunteers to file over 110,000 signatures with the Secretary of State, the Libre Initiative is in “dire need” of volunteers, it recently told its supporters.

Moreover, public school advocates know that while ALEC legislators have been successful in getting limited school voucher schemes passed in state houses across the nation, these measures never succeed when they are put to the ballot.