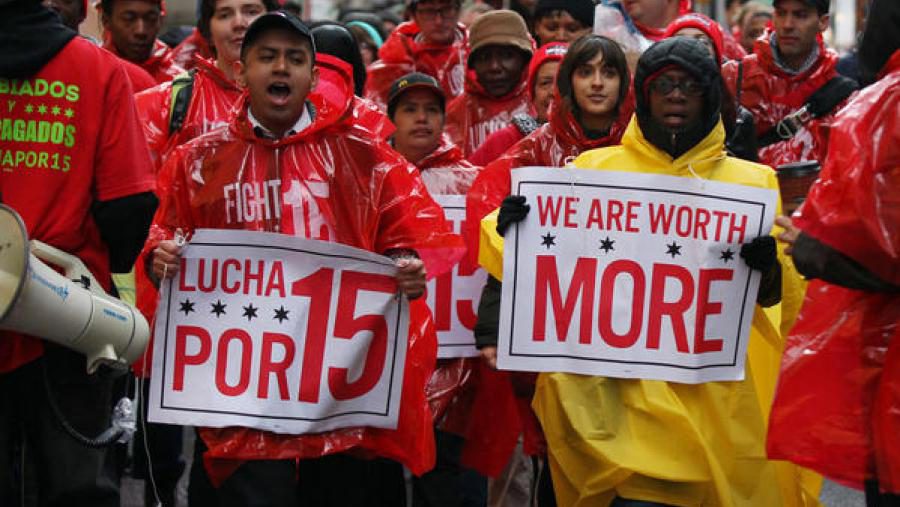 Even before Democrat Doug Jones’s unlikely win in the race for an Alabama Senate seat, Republicans were worried: There could be a wave of Democratic victories ahead, a backlash against President Donald Trump, in next year’s elections. The wave could carry with it a raft of pushes for progressive policies. But the right is girding itself for the fights they see coming up. One such fight could emerge over increasing the minimum wage.

One infamous lobbyist, in particular, is already looking forward to the battle. Rick Berman, a corporate lobbyist who specializes in orchestrating relentless public relation campaigns on behalf of industry groups, is busy mobilizing business groups to go on “offense” with the aim of killing minimum wage hikes even before public support has been marshaled for a push.

Berman recently traveled to Dallas to pitch a $4.6 million campaign to defeat labor reforms that may be championed by a resurgent Democratic Party.

“There will be significant erosion in Republican-held state legislative seats in November 2018,” the Berman memo notes. “The policy implications are obvious.” (Berman & Company, the consulting firm behind the pitch, did not provide a comment when contacted by The Intercept.)

The memo goes on to note the tough political terrain for this fight: The public is not generally opposed to raising the tipped minimum wage or pushing the federal minimum wage to $15. Indeed, a growing number of leading Democrats have pushed to raise the minimum wage.

While the issue created a significant fissure during the last Democratic presidential primary, most senior Democrats have come to embrace the $15 minimum wage championed by Sen. Bernie Sanders, I-Vt. In May, a group of Democrats, including congressional party leaders Rep. Nancy Pelosi, D-Calif., and Sen. Chuck Schumer, D-N.Y., announced support for legislation that would phase-in a $15 federal minimum wage by 2024.

Berman sees a looming threat for the industries he represents. In his pitch to potential donors, he called for businesses to provide funds to one of his groups, the Employment Policies Institute, in order to mount a multitiered campaign to shift the debate against minimum wage.“First, we need an offense message that identifies the true victims of ill-conceived wage mandates,” the memo says. “Our research indicates that when we connect the dots on wage mandates, the negative impact on youth unemployment, and the consequent destruction of entry-level jobs, we achieve a new public awareness and sympathy for youth ‘victims.’”

The communications budget in the pitch has line items for media outreach, including opinion columns and letters to the editor; television and print advertisements; and support for websites run by Berman, including Faces of 15, a site featuring businesses allegedly shut down over local minimum wage hikes.

A second part of the campaign calls for the food service industry, a longtime Berman client, to use its sphere of influence to make the case that businesses cannot afford greater labor costs. Berman suggests that messages from his group could be displayed on “table top coasters, tray liners, coffee sleeves, etc.” to make sure “millions” of customers and employees see the warning.

The campaign would also include an effort to sidetrack the debate on raising the minimum wage by instead proposing a special low minimum wage for youth. “A bipartisan public is receptive to lower ‘apprentice’ or ‘intern’ wage rates for young people,” Berman says in the memo. A lower youth wage would have the additional benefit of depressing wages across the board for lower level employees, the memo states, adding, “And a ‘youth’ wage will have a sobering ripple effect on all entry level wage rates.”

Berman is well-known for setting up groups that appear as authentic academic policy shops and grassroots organizations that are actually fronts for his business clients. Throughout the 1990s, Berman was paid by Philip Morris to downplay the risks of secondhand smoke through one such front group called the Guest Choice Network. In more recent years, Berman raised funds from the alcohol, meat, soda, and processed food industry while maintaining organizations designed to criticize public interest groups calling for greater regulation of consumer goods. In 2014, a leaked presentation showed Berman calling for oil executives to support his drive to vilify anti-fossil fuel activists and to exploit human emotions of fear and anger to win policy campaigns. “You can either win ugly or lose pretty,” he said.

Organized labor is Berman’s most consistent target. He operates several websites and groups, such as the Center for Union Facts, designed to mock union leaders and discourage Americans from supporting labor reforms.

The anti-minimum wage strategy for 2018 suggests that Berman hopes to again harness a more visceral approach.

“Today we need fewer statistics, and more graphic stories that show a growing societal crisis that needs to be avoided by rejecting wage policies with unintended consequence,” the memo states.

Previous disclosures have shown that companies such as Wendy’s, Phillip Morris, Tyson Foods, Cargill, and Coca-Cola have provided financial support to Berman.

Berman, however, has used a network of tax-exempt nonprofit groups to shield the identities of his business supporters. The package of documents distributed to potential supporters for the 2018 campaign includes a pledge card that donors to Berman’s Employment Policies Institute will be granted anonymity.

Business groups hoping to defeat minimum wage legislation have a limited opportunity to shift public opinion, according to the memo.

“Our time frame to get this done is in 2018,” Berman’s memo claims. “We expect a post-2018 election environment to embrace a far-left resurgence proposing broad labor market interventions. Our opportunity is to use the next 12 months before those elections to inform and engage public support on the growing crisis of youth unemployment.”