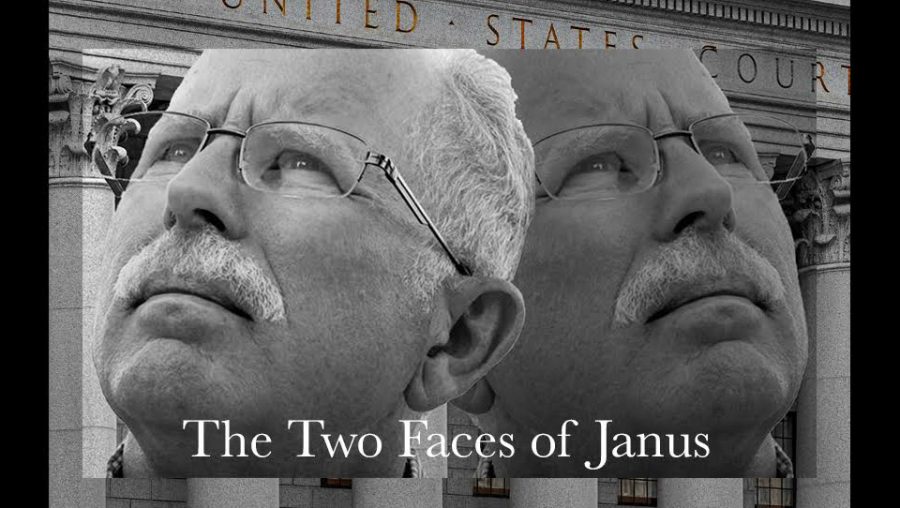 The Roman god Janus was known for having two faces. It is a fitting name for the U.S. Supreme Court case scheduled for oral arguments February 26, Janus v. American Federation of State, County and Municipal Employees, Council 31, that could deal a devastating blow to public-sector unions and workers nationwide.

In the past decade, a small group of people working for deep-pocketed corporate interests, conservative think tanks and right-wing foundations have bankrolled a series of lawsuits to end what they call “forced unionization.” They say they fight in the name of “free speech,” “worker rights” and “workplace freedom.” In briefs before the court, they present their public face: carefully selected and appealing plaintiffs like Illinois child-support worker Mark Janus and California schoolteacher Rebecca Friedrichs. The language they use is relentlessly pro-worker.

Behind closed doors, a different face is revealed. Those same people cheer “defunding” and “bankrupting” unions to deal a “mortal blow” to progressive politics in America.

A key director of this charade is the State Policy Network (SPN), whose game plan is revealed in a union-busting toolkit uncovered by the Center for Media and Democracy. The first rule of the national network of right-wing think tanks that are pushing to dismantle unions? “Rule #1: Be pro-worker, not anti-union. … Don’t rant against unions. … Using phrases like ‘union fat cats’ and ‘corrupt union bosses’ and other negative language reduces support for reform.”

And yet, SPN groups have systematically spearheaded attacks on unions and workers in statehouses and courtrooms nationwide. The Janus case, and its precursor, Friedrichs v. the California Teachers Association, represent SPN’s most audacious move yet, an effort to kneecap the unions of public-sector workers—including teachers, nurses, sanitation workers, park rangers, prison guards, police and firefighters—in a single blow.

On Jan. 11, 2016, about 100 people bundled in coats and mittens mill around the Supreme Court steps. They hold signs with little red apples that read, “Trust Teachers!” and “Respect Teachers? Then respect their First Amendment rights!”

From a distance, it looks like a teachers’ rally. A closer look reveals an odd array of participants. Grover Norquist, the man who wanted to drown government in a bathtub, cheerfully declines an interview as he breezes by. Daniel Turner, who worked for the education reform task force of the far-right American Legislative Exchange Council (ALEC), waves a “Trust Teachers!” sign from behind the podium. Near him stands Chantal Lovell from SPN’s Mackinac Center for Public Policy, a group credited with jamming a union-busting bill through Michigan’s lame duck legislature in 2012. A representative from SPN’s Arizona-based Goldwater Institute is present, as is a fellow from the Koch brothers’ Americans for Prosperity (who also declines an interview).

The night before, SPN organized a dinner for representatives of its member groups who had flown in for the oral arguments. Among its members were the lawyers representing the plaintiffs in Friedrichs and 12 groups that had filed supporting amicus curiae (“friend of the court”) briefs. The suit was filed on behalf of Rebecca Friedrichs and nine other California teachers who wanted to stop paying their “fair share fees”—money paid by non-union members to cover the costs of collective bargaining.

On the courthouse steps, a woman with a bullhorn tries to rev up the audience. “Who do we trust?” she asks. “Teachers,” murmurs the crowd. “Who?” she yells. “Teachers!” Now they have the hang of it. The podium is emblazoned with the hashtag #IStandWithRebecca.

Friedrichs deadlocked the Court 4-4 after the death of Justice Antonin Scalia, leaving the status quo of union fees in place. Expect a repeat of this courthouse scene February 26. SPN is once again rallying the troops and a #StandWithMark hashtag is already circulating.

Janus has its origins in a lawsuit filed by billionaire Illinois Gov. Bruce Rauner. Rauner issued an executive order in 2015 instructing Illinois to stop collecting fair share fees. At the same time, he filed a federal lawsuit to speed the issue to the U.S. Supreme Court. Two SPN member groups—the Illinois Policy Institute and the National Right to Work Legal Defense Foundation—joined the suit with plaintiff Mark Janus, who makes a much more sympathetic poster child than a billionaire venture capitalist. When Rauner was found not to have standing, Janus was allowed to pursue the suit.

Janus is a child-support worker employed by the Illinois Department of Healthcare and Family Services. “The union voice is not my voice,” Janus wrote in a Chicago Tribune op-ed. “The union’s fight is not my fight. But a piece of my paycheck every week still goes to the union.” His lawyers will argue before the Court that if “money is speech” in a post-Citizens United world, then fair share fees are unconstitutional “forced” or “coerced” speech.

The Court decided 40 years ago in Abood v. DetroitBoard of Education that fair share fees are constitutional. The decision tried to balance the right of a union to exist against the rights of any workers who don’t want to be members. Since unions must represent all employees in contract negotiations, the Court held that nonmembers could be assessed a fee to cover the costs associated with this representation. But, the Court said, nonmembers could not be charged for costs associated with political activities. Today, fair share fees and political fees are separated. The Abood decision is not a good enough compromise for the Janus lawyers, who argue everything a public-sector union does is political.

Overturning Abood would be “a right to a free ride, nothing more, nothing less,” says Joel Rogers, a University of Wisconsin law professor. “There’s no question that it’ll have a devastating financial effect on public-sector unions, at least in the short term.

Read the rest of our special investigation in In These Times.