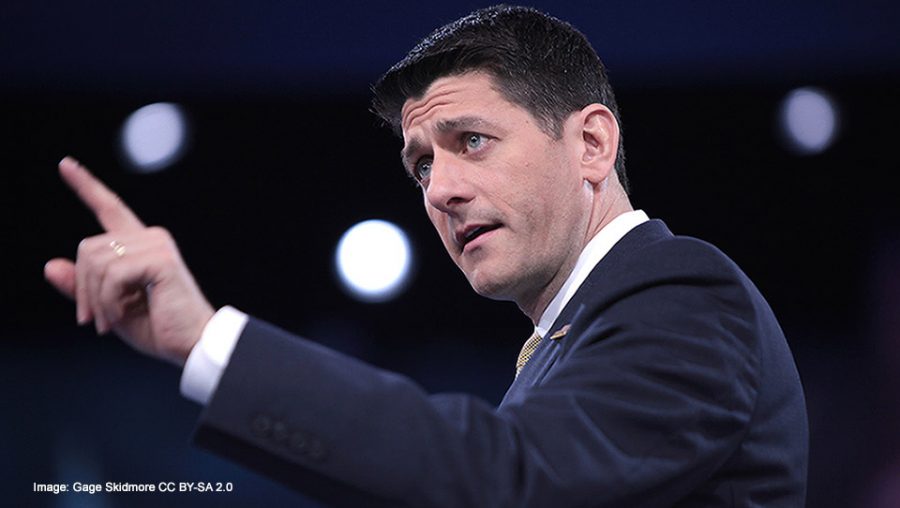 Wisconsin’s right-wing machine, including U.S. Speaker Paul Ryan, Governor Scott Walker and a host of dark money groups which have gerrymandered the state, passed scores of right-wing policies, lowered wages, attacked public education, destroyed the state’s clean elections laws and packed the state Supreme Court with knee-jerk Republicans, is showing signs of being in a state of decline and decay that can only be described as Romanesque.

It is hard to imagine any other Speaker leaving his post at such a pivotal time in the nation’s history.

To be sure, the Trump administration is a nightmare for Ryan. With the Mueller investigation closing in on Trump’s personal lawyer and with the leader of the free world Tweeting out “missiles are coming,” Ryan never knows what madness will be unleashed. But when a nation is in turmoil and unprecedented crisis, it looks to principled leaders to bring some order to the chaos.

Ryan has repeatedly punted on this obligation, putting party-over-principle. Faced with a president whose business interests pose unprecedented opportunities for corruption, Ryan repeatedly blocked votes to require Trump to disclose his tax returns. Faced with mounting evidence of law breaking in the Russia probe, Ryan allowed Rep. Devin Nunes (R-CA) to shut down the House intelligence committee “investigation” in a laughable whitewash.

No wonder Ryan’s approval ratings have been dropping like a stone, less than a third of Americans actually approved of the job he was doing.

Ryan has deep ties to the Kochs. One Koch operative gushed “we have one of the brightest and strongest conservative minds in America in Paul Ryan” and with those Koch ties, Ryan raises a fortune for Republican House candidates. By quitting, Ryan looks like he is “raising the white flag,” says talking head Charlie Sykes. More than 40 House Republicans are leaving the chamber to retire or seek other offices. Ryan’s departure may spark a further stampede.

But Democrats won’t have an easy job taking control of the House. A Democratic “wave” would have to be greater than 7 points to take back the House, calculates David Wasserman of the Cook Political Report. Democrats would have to exceed 11 points to overcome heavily gerrymandered districts, argues a new Brennan Center study.

In Wisconsin, one candidate just pulled off that feat.

Wisconsin Judge Rebecca Dallet, who slammed Trump for attacking “our civil rights and our values” in a campaign ad, trounced her right-wing opponent Judge Michael Screnock, by 12 points (56-44) to become the first liberal contender elected to an open seat on the state’s supreme court since 1995.

She prevailed even after the Wisconsin GOP unleashed big money and big lies. Wisconsin Manufacturers and Commerce spent a whopping $1 million on an ugly attack ad which disclosed information that allowed the childhood victims of sexual abuse to be identified, violating their privacy and upsetting the family. WMC refused to take down the ad even when the parents of the children contacted them privately, then publicly demanded the ads be taken down.

The larger message of the ad, that Dallet was weak on crime was a lie. Dallet in fact had been ranked as one of the strictest judges in Wisconsin. When the progressive advocacy group One Wisconsin Now sent a letter to the members of the WMC board, urging them to take the ad down, WMC yanked the list of businesses on their board from their website. (The membership of the WMC board can be accessed on CMD’s Sourcewatch.)

While Rome was burning, Screnock’s campaign team was fiddling. Screnock hired Champion Group LLC. The firm, once the stronghold of Walker campaign manager Keith Gilkes, has taken over by Luke Hilgeman, the former GOP legislative staffer, former CEO of the Koch’s Americans for Prosperity. Why Hilgeman left a plum job with the Kochs to return to Wisconsin is a bit of a mystery, but it may be that he simply doesn’t work that hard. The Milwaukee Journal Sentinel’s Dan Bice pointed out that Hilgeman’s Facebook page showed him soaking up the sun in Arizona the week before the race. Sure Hilgeman may have known his client was going to lose, but to Facebook his fun? That’s downright decadent.

Other candidates are lining up in hopes of surfing a blue wave, including Paul Ryan’s opponents. “Iron Stache” Randy Bryce is raising money hand over fist. Bryce knows that “electorates far more conservative than Wisconsin’s First have already elected Democrats in special elections in Wisconsin and across the country.” Schoolteacher, Cathy Myers, is also running a spirited campaign to replace the Ryan.

Which is why the GOP in Wisconsin has been engaged in some of the dirtiest tricks yet.

DIRTY TRICKS CHECKED BY THE COURTS

Walker was spooked by the big win scored by Democrat Patty Schachtner in January. In a district that backed Trump 55-38, Schachtner swept to victory 54-44. In other words, a 26-point Republican advantage in November 2016 shifted to an 11-point Democratic advantage in January 2018.

Her win prompted Walker to slow walk the scheduling of two new special elections and hope that no one would notice. When the Nation magazine called Walker on the carpet, former U.S. Attorney General Eric Holder and the National Democratic Redistricting Committee sued.

Not one Walker appointed judge, not two, but three judges told Walker to knock it off. In the words of Court of Appeals Judge Paul Reilly, a Republican presiding in the GOP stronghold of Waukesha: “The election of our representatives are never ‘unnecessary,’ never a ‘waste of taxpayer resources,’ and the calling of special elections are, as the governor acknowledges, his obligation.”

The judge’s stern words and the plain language of the law, which specifically required that the governor to schedule a special elections “before the 2nd Tuesday in May in the year in which a regular election is held” prevailed, forced Walker to schedule the elections and forced GOP senators to drop their embarrassing plans to pass legislation to block the elections after they were scheduled.

Only U.S. Senate candidate Leah Vukmir clung to the absurd notion that electoral democracy was a waste of taxpayer dollars. “Once again, all logical thought processes fail to exist, and the taxpayers are on the hook” said Vukmir in a statement.

Walker, who is facing election himself in 2018, is sounding the warning that the barbarians are at the gates.

“Tonight’s results show we are at risk of a #BlueWave in WI,” Walker tweeted after Dallet’s big win. “Next, they’ll target me and work to undo our bold reforms.”

Even in hyper-gerrymandered states like Wisconsin, a blue wave could be more than just a hashtag.

“Governor Walker can lash out in frustration and his right-wing enablers can try to spin away what’s happened. But the blue wave is real, and it is ashore in Wisconsin from the Mississippi River to Lake Michigan and everywhere in between,” Scot Ross of One Wisconsin Now.