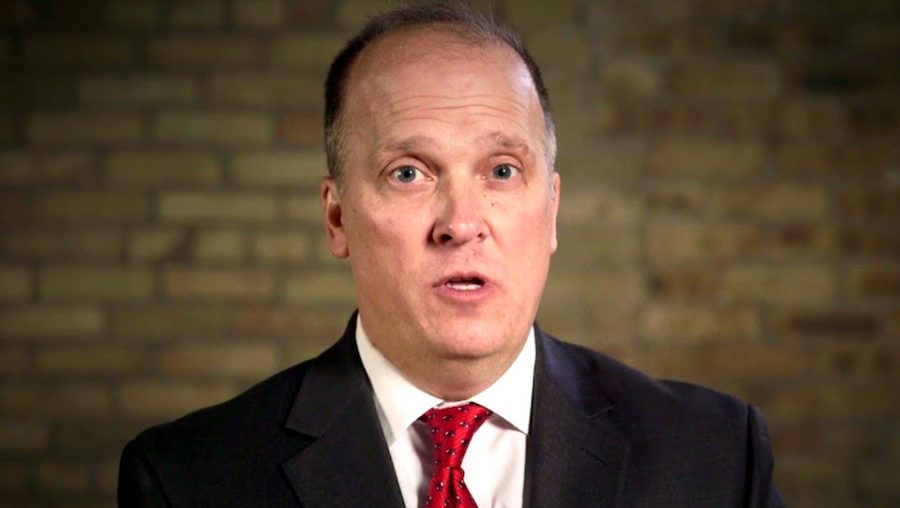 The Federalist Society for Law and Public Policy, a right-wing legal association which has been helping Republican presidents and politicians pack the courts, held its “Inaugural Wisconsin Chapters Conference” amid controversy at the Monona Terrace in Madison on May 4, 2018.

Before the Madison event even got underway, a group of 15 Wisconsin judges protested the use of state resources and the awarding of judicial education credits for attendance at an event organized by a “private advocacy group with a definite political agenda,” which featured a speech by Wisconsin Attorney General Brad Schimel, who is up for reelection this year.

The judges wrote to organizers of the event to ask if state money was used for a ACLU event featuring a Democratic candidate, “would the Office of State Courts financially underwrite the event and incentivize judicial attendance with credits towards the judges’ mandatory continuing legal education?”

The Federalist Society is a considered by many to be a highly partisan political operation. The Federalist Society’s Executive Vice President, Leonard Leo, played a leading role in the nomination of Justice Neil Gorsuch and other far-right Trump court picks, and Leo has long been involved in the Judicial Crisis Network, a dark money group that spent millions on TV ads backing the Gorsuch nomination.

But on April 25, 2018, State Appeals Court Judge Brian Hagedorn sent out an email to judges encouraging them to attend the Federalist Society conference. The email indicated that mileage and meals would be reimbursed by the state and that two judicial education credits would be awarded for attendance. The program also indicated that continuing legal education credits would also be awarded to lawyers who attended.

Fifteen Wisconsin judges wrote to Hagedorn and the Judicial Education Committee in protest.

The letter, obtained by the Center for Media and Democracy (CMD), states:

We find it highly inappropriate that the Office of State Courts is spending money on this event. We object that a single appellate judge – apparently a member of the Federalist Society – would broadcast this “invitation” to the bench on state email thus adding subtle pressure on circuit judges to attend. Finally, during an election year, we do not believe it is appropriate for the judicial branch to be underwriting attendance at a private event where the Attorney General, who is on the ballot in a politically partisan race, is the keynote speaker.

Schimel is a member of the Federalist Society and a dark money operation associated with the group aided Schimel’s campaign in 2014. The Federalist Society’s Leonard Leo was listed as a director of the Rule of Law Project, which spent $200,000 in support of Schimel late in the 2014 race, prompting a federal complaint by the watchdog group Citizens for Responsibility and Ethics in Washington. Schimel also received $2,000 from Leo personally.

Hagedorn was Governor Scott Walker’s chief legal counsel from 2011-2015 when CMD was forced to sue Walker for records related to his controversial changes to the “Wisconsin Idea.” Walker had to be represented by his legal staff after Schimel decided not to defend the governor in the case. CMD ultimately won that suit, proving that the controversial changes were not a “drafting error” as claimed, but originated in Walker’s office.

Hagedorn was a Federalist Society member in college and interned at the Alliance Defense Fund, an organization founded by leaders of the Christian Right. Today, it is called the Alliance Defending Freedom (ADF), and members of this group were also at the event. Hagedorn is also reportedly planning a run for the Wisconsin Supreme Court against long-time Justice Shirley Abrahamson.

“The independence of the judiciary has been under especially heavy attack over the last decade from many sources,” the judges wrote. “The last thing the Office of State Courts should be doing is contributing to the problem by politicizing our judicial training.”

CMD confirmed with the Wisconsin Court System that the judges did in fact receive taxpayer money to attend, but was not given the details as to what exactly was covered.

The judges’ concerns about the political nature of the state-subsidized event proved to be justified.

To large applause, keynote speaker Brad Schimel took the mic in front of the backdrop of Lake Monona to promote his work over the last three and a half years and to thank attendees for their involvement in the Federalist Society.

Schimel kicked off his presentation by reminding the audience that “it is an election year.” He then catalogued his accomplishments in a campaign-like speech:

Act 10 still fighting, two months ago another lawsuit filed against Act 10, voter ID of course still fighting, Right to Work, still fighting sort of, mostly won on that one. The redistricting thing, we thought we’d have a decision in February and now we don’t know but quite a battle and I’m very proud of the team. They really shined at the United States Supreme Court.

That Supreme Court case was Gil vs. Whitford. The U.S. Federal Court for the Western District of Wisconsin decided that Wisconsin Republicans had engaged in such egregious, hyper-partisan gerrymandering after the 2010 census that new maps must be drawn. The case is now pending before the U.S. Supreme Court and Schimel has spent hundreds of thousands in taxpayer money hiring outside lawyers to help with that case.

Schimel also discussed the “regulatory certainty” he helped to create while in office that led to companies like Foxconn, the Taiwanese electronics company, setting up business in the state. Previously, Schimel boasted of being the “bag man” for Governor Walker’s efforts to stifle regulations from multiple agencies at the Republican Attorneys General Association conference in January, according to a report by Maplight.

Notably, Schimel’s opponent in the November 2018 race, attorney Josh Kaul, was not invited to speak, his office reports.

Schimel concluded by recognizing his “friend from the Alliance Defending Freedom” in the room and stating that his time spent at the ADF’s conference last year was “some of the best time I ever spent.” One Wisconsin Now, a liberal advocacy group, pointed out that the conference was at a luxury resort in California and is demanding information about that trip.

“Brad Schimel needs to come clean on why, in his official capacity as Attorney General of the state of Wisconsin, he took over $4,100 for first class travel and accommodations to appear before a hate group,” said Executive Director Scot Ross, who wants Schimel’s office make his remarks publicly available.

The Arizona-based Alliance Defending Freedom (ADF) group applauded by Schimel has been labeled a hate group by the Southern Poverty Law Center (SPLC), which monitors neo-Nazi and other extremist groups.

Jordan Lorence, Senior Counsel at ADF, attempted to make the case that Christianity is under attack in America and defended businesses that want to discriminate against LGBT people for religious reasons in his discussion of ADF’s lawsuit pending before the U.S. Supreme Court Masterpiece Cakeshop v. Colorado Civil Rights Commission. The case involves a cake maker who refused to make a wedding cake for a gay couple.

The Federalist Society event’s partisan nature was evident in panel discussions as well. The main takeaway in the panel “State and Federal Judicial Selection” was clearly that Republicans choose better judges. Carrie Severino, Chief Counsel and Policy Director for the Judicial Crisis Network, praised Trump over and over for his judicial nominations and blamed the Democrats for not confirming his nominees.

Severino, of course, made no mention of the fact that GOP Senate Majority Leader Mitch McConnell orchestrated a two-year slowdown of judicial confirmations before Trump took office that left him with more than 100 seats to fill, or his unprecedented refusal to hold a confirmation vote on President Obama’s nomination of Merrick Garland to the Supreme Court.

The Judicial Crisis Network received over $6.7 million from the mysterious Wellspring Committee in 2014 and funneled that money into judicial campaigns and elections and other activities.

Walker’s Chief Legal Counsel Katie Ignatowski was given ample time on the panel to let lawyers and judges in the room know what they need to do to get a judicial appointment or nomination from the governor, including to “be in organizations like the Federalist Society.” Around 25 percent of seated judges in Wisconsin have been appointed by Walker, Ignatowski noted.

The Federalist Society has received millions in funding from right-wing foundations, including the Milwaukee-based Bradley Foundation, the Koch family foundations, the John M. Olin Foundation, Sarah Scaife Foundation, Searle Freedom Trust, among others.

The program for the event is embedded below.