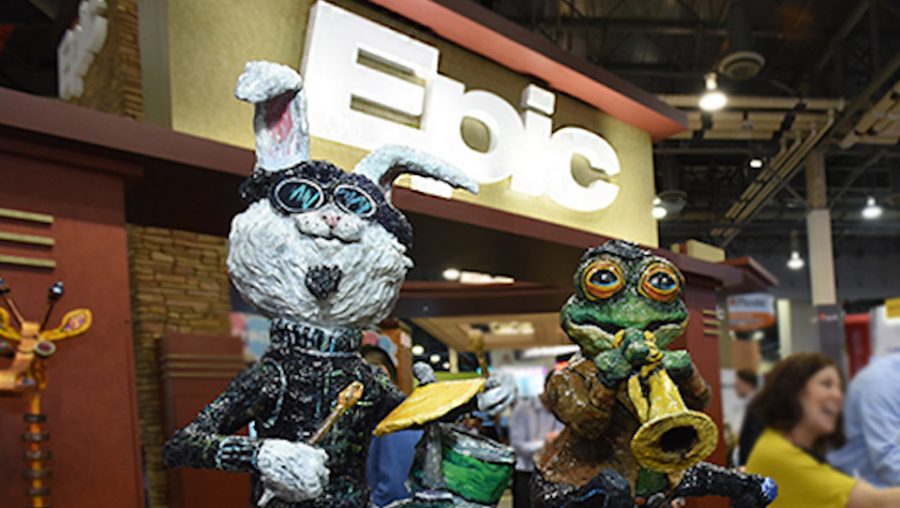 When unemployment drops and labor markets tighten, wages are expected to rise. This has been the pattern in the United States for decades. But as the economy continues to recover from the 2008 Wall Street meltdown, something has gone seriously awry.

Unemployment dipped below 4 percent this month–its lowest level since 2000–but few workers are seeing more money in their paychecks.

Economists agree that a key variable in the wage stagnation is the inability of the vast majority of American workers to join together to demand higher wages. Unionized workers have been under sustained assault by deep pocketed corporate and ideological forces. The Koch funded American Legislative Exchange Council (ALEC) has made deep inroads in the states, passing union-busting “right to work” and “pay check protection” legislation and other bills, such as the repeal of prevailing wage laws and bans on local living wage campaigns, that are designed to lower wages.

Now, the power of nonunion workers is under assault by a hostile U.S. Supreme Court with Trump nominee Neil Gorsuch casting the deciding vote.

In a decision penned by Justice Gorsuch, the right-wing majority of the U.S. Supreme Court ruled in Epic Systems Corporation v. Lewis on Monday that businesses can prohibit their workers from banding together to battle their employers in court in disputes over pay and workplace conditions.

Employees of the Wisconsin-based tech firm Epic Systems sued the firm to recover overtime pay. They sought to void arbitration agreements they were forced to sign as a condition of employment which required them to pursue complaints in private arbitration, not in the courts. Gorsuch sided with Epic and ruled that the 1925 Federal Arbitration Act trumped the protections for collective action contained in the 1935 National Labor Relations Act (NRLA), even though NLRA was passed by Congress at a later date.

In a stinging dissent read from the bench, Justice Ruth Bader Ginsburg called the decision “egregiously wrong.” She argued that workers were granted significant rights under the New Deal’s NLRA including the right to pursue litigation collectively, and that an employer-dictated waiver would violate it.

“Employees’ rights to band together to meet their employers’ superior strength would be worth precious little if employers could condition employment on workers signing away those rights,” Ginsburg wrote.

Now workers who want to unite against wage theft, sexual harassment or discrimination based on race, gender and religion are on their own against their employers in private, closed door arbitration forums. “Expenses entailed in mounting individual claims will often far outweigh potential recoveries,” notes Ginsburg.

“Every American needs to know that the Trump administration sided not with the workers in this case, but with the corporations that want to strip away workers’ rights,” said Christine Owens, Executive Director of NELP. “Very few workers are willing to take on their employer by themselves and risk termination, abuse, or worse. Few workers can afford to spend thousands of dollars to pursue an individual case. Collective and class actions exist for this very reason, so that regular people can pool their claims and get a lawyer to pursue their case.”

Epic founder Judith Falkner, known in Wisconsin for her generous charitable contributions and liberal politics, will now have her name forever associated with this decision. Forced arbitration will become standard operating procedure and will be used by employers to strip American workers of their right to access the justice system and their ability to take collective action.

Next Up: SCOTUS to Rule on Janus vs. AFSCME

Gorsuch’s willingness to turn back the clock to 1925, when worker exploitation was rampant, does not bode well for other cases before the court.

The Epic Systems case was argued in the same term as another major labor-relations case. As this reporter has detailed for In These Times, the Janus vs. AFSCME case argued in February could do severe damage to the ability of teachers, nurses, police, fire and other government workers to collectively bargain for better wages and working conditions. The case threatens to turn millions of good paying public-sector jobs, with health care and pensions, into the “dead-end crap jobs with crap wages” that Americans fear.

The Janus case was spearheaded by the $80 million State Policy Network (SPN), ALEC’s sister group made up of 66 right-wing think tanks and other Koch funded institutions. The Center for Media and Democracy uncovered a 2016 SPN fundraising letter and “toolkit” detailing four strategies for dismantling unions and striking a “mortal blow” to progressive politics and the Democratic Party.

Now key SPN groups plan on taking a Janus victory and hitting the ground running launching a nationwide drive to persuade public-sector union members to rip up their union cards.

Matt Patterson, executive director of the anti-union “Center for Worker Freedom” told Bloomberg that if the Supreme Court rules in favor of Janus, that he will launch a new group using door-to-door canvassing and ads to convince union members to halt paying their dues. The Center for Worker Freedom is the same outfit that led the effort opposing the unionization of a Volkswagen plant in Chattanooga, Tennessee. It is a project of anti-tax and anti-union advocate Grover Norquist and his Americans for Tax Reform group.

Vincent Vernuccio, who convinced Michigan lawmakers to ram through an ALEC union-busting bill during a lame duck session while at the Mackinac Center in 2012, cofounded a similar group late last year called, “Moving Unions Forward” to push UAW members to stop paying their dues.

As the graph below shows, the decline of organized labor in America has exactly tracked the decline of the middle class. But that doesn’t bother the billionaire Koch brothers and the corporate elites that bankroll a radical anti-worker agenda. 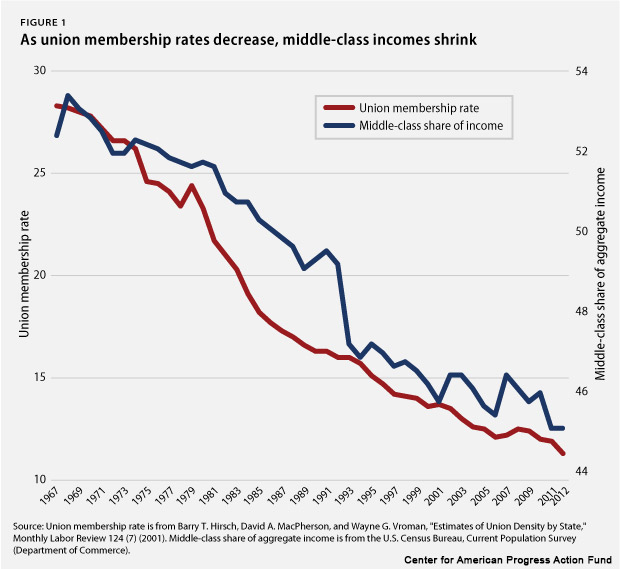 Speaking of the Koch groups, Harvard professor Theda Skocpol noted: “This form of ultra-conservatism is geared toward making sure that there is no organized power outside of big business and wealthy, organized donors.” With no organized power, there is little chance of obtaining the wages working families need and deserve.

Hope lies in the massive civil disobedience perpetrated by teachers across America as they organize for better wages and bigger investments in community schools, which have been starved of resources in too many states that have pursued ALEC-style austerity. The teachers’ protests–dubbed the #RedforEd movement–have swept through West Virginia, Kentucky, Oklahoma, Arizona, and North Carolina since February.

These mass mobilizations are reminding policymakers that collective bargaining is a useful tool for keeping labor peace. And they are reminding America’s beleaguered workforce that it cannot progress toward economic and social justice without an organized and robust labor movement.