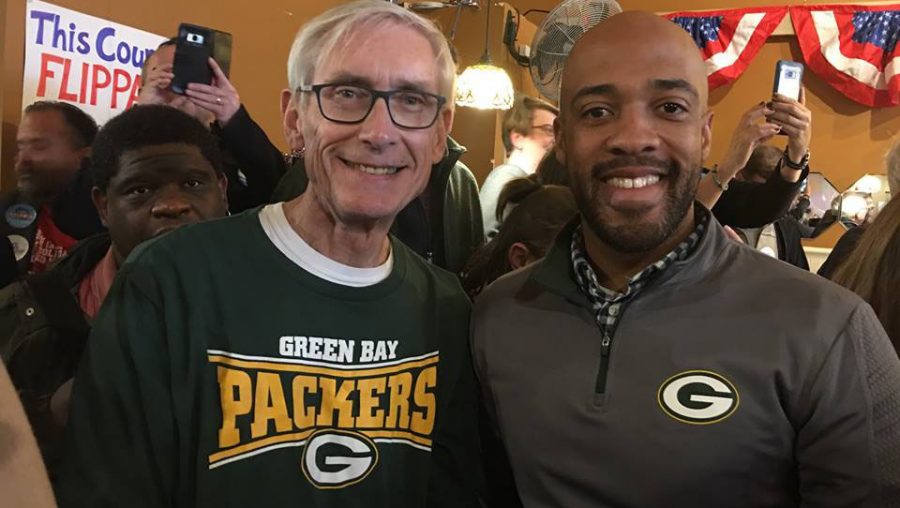 (MADISON) — State School Superintendent Tony Evers defeated incumbent Governor Scott Walker 49.6 to 48.4 in a late night finish that kept supporters of both candidates on pins and needles. Evers won by 1.2 percentage points, which did not meet the standard for an automatic recount, and Walker was hoisted by his own petard, unable to pay for a recount himself because he changed in the law in 2017 to prevent such occurrences.

A former public school teacher and a three term school superintendent who managed a school system of some 100,000 employees and 860,000 children, Evers has taught in communities across the state and successfully elevated education on the campaign trail as a major priority, right behind protections for preexisting conditions.

With Wisconsin’s gerrymandered legislature still under the control of Republicans, the electoral victory will give Evers, who will inherit one of the nation’s most powerful veto pens, a leading role in the formulation of the state budget and in the redistricting process that will take place after the 2020 census. Wisconsin’s heavily gerrymandered districts favoring Republicans were declared unconstitutional by a federal court in 2017, and preventing another 10 year gerrymander was the number one goal of many Democratic strategists.

A Democrat in the governor’s mansion will also put an end to Wisconsin’s role as a national petri dish for right-wing policies promulgated by the Koch brothers and the American Legislative Exchange Council (ALEC), including austerity budgeting, union-busting, voter ID and the systematic denial of Medicaid assistance to the state’s residents.

Evers was introduced on election night by Mandela Barnes, his running mate for Lt. Governor, who told the large crowd at about 1:30 a.m. “This is so exciting. For all the people who have been left behind in the State of Wisconsin, and have been failed by the policies of the last eight years, change is going to come!” Evers himself took to the stage to declare: “My name is Tony Evers and I am going to be the next governor of the State of Wisconsin!” and he reiterated a major theme “I will be focused on solving problems, not on picking political fights.”

The campaign was a stunning display of Wisconsin “nice” overcoming huge money advantage of a well-funded incumbent who began and ended his campaign with smears and distortions.

As of November 5, the Wisconsin Democracy Campaign reported that Walker’s campaign had outraised Evers by $31 million to $9 million. Additionally, outside independent expenditure groups backing Walker outraised the Democratic counterparts by almost a 3-to-1 edge, but the numbers do not include issue ads which boost Evers numbers.

The three biggest independent expenditure groups in the state were the Koch’s Americans for Prosperity (AFP) at $7.4 million, Right Direction Wisconsin PAC of the Republican Governor’s Association (RGA) at $6.4 million and ACC Wisconsin PAC also of the RGA at $4.3 million. The Koch’s have been big supporters of RGA.

On the flip side the biggest outside spender for Evers was likely the Democratic Governors Association issue ad group “A Stronger Wisconsin” with an estimated $5 million in TV and digital ads criticizing Walker’s record on roads, education, and health care.

Walker launched his campaign against Evers with an explosive smear, falsely accusing him of coddling a teacher caught looking at pornography, a charge ranked “mostly false” by Politifact. The ads carried all the hallmarks of Walker’s chief campaign aide R.J. Johnson, who specialized in hard-hitting distortions. In the final days of the campaign, the RGA attacked again on the same theme. Ironically, late in the campaign the Milwaukee Journal Sentinel reported that the Walker administration granted state licenses to four pedophile ex-priests.

On the flip side, Evers ran a much more positive campaign, introducing himself to voters with his long history of teaching in school districts across the state and sticking to substance on key issues. Evers made much of the fact that Walker would talk about safeguarding preexisting condition protections to voters, while at the same time he was a signatory to a Texas lawsuit geared toward striking down the Affordable Care Act. A Marquette Law School poll showed that a stunning 82 percent of likely Wisconsin voters thought pre-existing condition discrimination was a very important issue heading into the election.

Trump, who won the state by 23,000 in 2016, was not mentioned by either candidate in campaign commercials, but loomed large over the election. Many Wisconsin voters supported Evers “because they don’t like Trump, they don’t like where this country is headed and the news they read every day,” said John Matthews, who helped spark the Wisconsin Uprising by taking Madison teachers out of the classrooms and into the streets in 2011.

While Evers focused his campaign on mainstream messages appealing to his broad base of supporters, make no mistake, he embraces the label “Wisconsin progressive” and advances ideas like a public option for BadgerCare and restoration of education funding. When asked if undocumented residents should have drivers permits to get to work, Evers did not hesitate to reply “The answer is yes” in a debate clip later used by the Walker team to attack him as being pro-immigrant.

Sticking to the positive, Evers and his surrogates failed to dig deep into past Walker scandals and multiple instances of pay-to-play corruption. But multiple groups made hay with the terrible conditions of Wisconsin roads — effectively labeling potholes “Scott-holes.” The advocacy group One Wisconsin Now highlighted Walker’s extensive use of airplanes to travel to events all over the state costing taxpayers $818,000, a theme later picked up and used by electioneering groups and by candidate Evers who made a point to drive the short distances that Walker had flown.

The Koch brothers have spent unknown millions in dark money ads defending Walker’s austerity policies, union-busting bills and other ALEC priorities over the years and this election cycle was no different. AFP was a big cheerleader for Walker’s 2011-2013 budget bill which slashed $800 million from K-12 education and ran “It’s Working!” ads on television in multiple cycles in support of Walker. But those deep cuts and additional ones ladled on in following budgets caught up with the governor this election cycle.

Schools across Wisconsin are suffering and every parent and child knows it.

Julie Underwood, the former Dean of the University of Wisconsin School of Education told the Center for Media and Democracy (CMD): “Frankly, it’s not working. Schools are closing, important programs are being cut and schools are laying off essential personnel, like librarians and school nurses. We have swelling class sizes and the widest racial achievement gap in the nation.”

Recent public hearings on the school funding formula evoked distraught testimony from educators and administrators across the state, like Cliff Gerber of the rural Gillette school system who has been the treasurer of the district for 33 years. His school district, like many, is facing a difficult funding crisis and he told legislators bluntly that he was unable to see a way forward to fund the rural school system: “I’m out of options… if we lose our school district we have lost our community.” Matthews hopes that Evers will consider taking the $1 billion the state spends on unaccountable voucher schools, and reinvest in a smart way in Wisconsin public schools.

When Walker claimed to be the “education governor” early in the campaign, Evers ran a devastating ad claiming that Walker “educated us that cuts to public schools hurt our kids, he educated us he would rather play politics than fix our roads. I don’t know about you folks, but I have had enough of Scott Walker’s education.”

As unions have declined after Walker’s efforts to dismantle collective bargaining in the state, new groups have stepped up to mobilize voters.

After an ALEC-style voter ID bill made it harder for students and African Americans to vote in 2016, a coordinated response was needed and Tom Steyers NextGen filled the void on Wisconsin campuses. The group fielded 66 staff on 32 campuses mobilizing 1,400 volunteers to help students get registered and to the polls. NextGen organized some 50,000 young people to vote with 175,000 doors knocked.

“Republicans tampered with our election law because they do best when fewer young people vote — we’re not letting them get away with that. NextGen America has run the largest campus organizing program Wisconsin has seen in years to make sure every student has the tools and information they need to cast a ballot in this election,” said state director George Olufosoye.

Some 27,000 voters, mostly working people of color on the north side of Milwaukee stayed home on election day in 2016. To make sure this did not happen again, the Milwaukee Area Service & Hospitality Workers Organization created a vigorous voter outreach program geared toward knocking on every door, not just on the doors of identified democrats. Before the final weekend of the election they knocked on 150,000 doors, identifying some 35,000 Evers-Barnes voters. Moving into the final weekend of the campaign their goal was to hit 120,000 doors again, organizer Peter Rickman explained. This outreach proved critical as it was 38,000 absentee ballots from Milwaukee that put Evers over the top.

Citizen Action of Wisconsin, which has been educating and mobilizing health care voters for over a decade, started campaigning on the dominant wedge issue of pre-existing conditions discrimination in the 2012 election cycle, and never stopped. The group, led by Dr. Robert Kraig, played major role in developing the BadgerCare Public Option proposal advocated by Evers and Barnes and in mobilizing the grassroots to advance the proposal.

The Bernie Sanders inspired group Our Wisconsin Revolution contacted 250,000 voters via door knocking, emails, and a text messaging system, a popular new tool in campaigns and elections. The Working Families Party (WFP), most often associated with New York, which has fusion voting, has also made big gains in recent years, becoming one of the largest volunteer operations in the state. Working Family organizers asked ironworker Randy Bryce to run against Paul Ryan and co-sponsored a rally with Sanders in Kenosha’s famous UAW hall in the final weeks of the campaign. WFP organized early support for Mandela Barnes, who serves on the state board, with 90,000 texts before the primary.

The nation’s largest online organizing group MoveOn was active in the state this year. Dozens of volunteers sporting MoveOn t-shirts showed up at every rally and the group as a whole generated more than 30 million peer-to-peer text messages from volunteer teams. MoveOn political director and Wisconsinite Ben Wikler was in Madison working with comedians like Judd Apatow and Ilana Glazer of Broad City to turn out the college vote.

The Evers win is a big one for Wisconsin progressives. “Walker may have divided Wisconsin,” said Ben Wikler, “but he didn’t conquer it.”