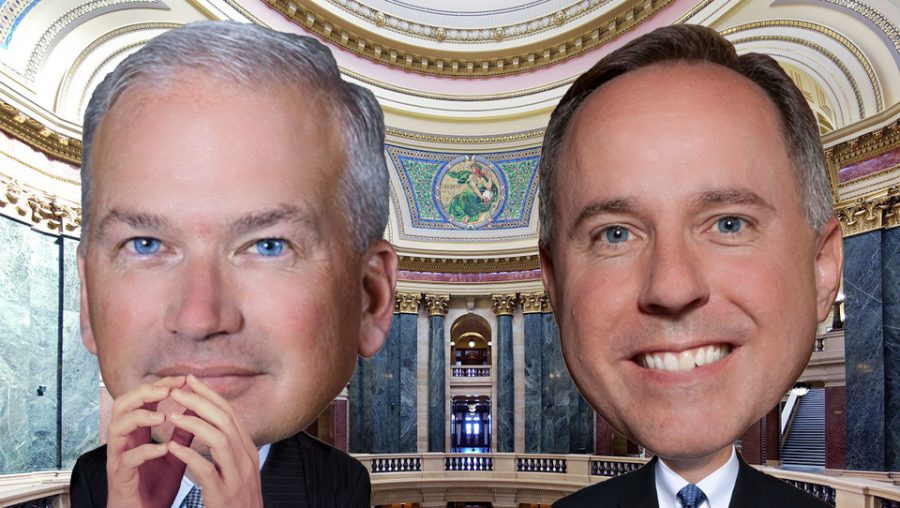 It was a bright blue wave in Wisconsin. More than 2.6 million people voted, more than in any previous midterm, more than in the 2012 recall election, and roughly 60 percent of the state’s voting-age population. Democrats swept constitutional offices, winning Governor, Lt. Governor, State Treasurer, Secretary of State, Attorney General, and a U.S. Senate seat for the first time since 1982.

But before Democrats could strike up the band at the inaugural ball, Wisconsin Republicans, the beneficiaries of an unconstitutional partisan gerrymander, were already preparing a lame-duck session and a slate of dirty tricks.

Wisconsin Republicans, led by Speaker Robin Vos and Senate Majority Leader Scott Fitzgerald, are considering enacting voter suppression rules, seizing control over key state boards, and changing the date of the next Supreme Court election to thwart the will of the voters.

“And there is no reason to think they will stop there,” said Jay Heck director of Common Cause Wisconsin.

“Wisconsin has now gone through four election cycles in which the result of what the voters wanted is not reflected in the seat allocation in the Legislature,” said Sachin Chheda, a progressive strategist leading the fight for fair maps in Wisconsin.

“Despite the fact that far more Wisconsinites voted, not only to elect Democrats in all statewide offices for the first time since 1982, but also to elect Democrats to the Legislature, the hyper-gerrymandering of state legislative districts by the Republicans made it possible for Vos and Fitzgerald to maintain iron control over the State Assembly and State Senate,” said Jay Heck, Director of the nonpartisan reform advocacy organization, Common Cause in Wisconsin.

The day after the election, Vos told reporters, “If there are areas where we could look and say, ‘Geez — have we made mistakes where we granted too much power to the executive,’ I’d be open to taking a look to say what can we do to change that to try to re-balance it.” The comments created an uproar and Vos abandoned the “gee willikers” tone. “We are not going to roll over and play dead like they assume we probably should,” Vos said.

Ideas floated by Vos and Company?

If Vos has made “mistakes” in giving the governor too much power he seems to have just realized it. “In the campaign for the 63rd Assembly extending from April until November, I do not recall any statement from Mr. Vos that the newly elected governor should have their powers limited by the legislature,” said Joel Jacobsen, his Democratic opponent.

Significant voter ID changes are sure to spark litigation. Wisconsin’s voter ID law was one of the strictest in the nation, making it harder for students and African Americans to vote. One GOP staffer told the public that legislators crafting the bill were “giddy” over the voter suppression potential of voter ID.

A federal judge agreed when he struck down many aspects of the law. “The evidence in this case casts doubt on the notion that voter ID laws foster integrity and confidence,” said Judge James D. Paterson in a case brought by the watchdog group One Wisconsin Now. “The Wisconsin experience demonstrates that a preoccupation with mostly phantom election fraud leads to real incidents of disenfranchisement, which undermine rather than enhance confidence in elections, particularly in minority communities. To put it bluntly, Wisconsin’s strict version of voter ID law is a cure worse than the disease.” The case was litigated by now Attorney General-elect Josh Kaul, who is not likely to sit on his hands if further changes are proposed.

In numerous states, where the GOP program of deep cuts to government spending and lower wages for workers is wearing thin, changing the rules surrounding elections to benefit Republicans and their minority viewpoint is now a commonplace tactic.

On Thursday, the Milwaukee Journal Sentinel reported that Republicans are considering moving the date of a key Supreme Court race because it will be held alongside Wisconsin’s presidential primary in 2020, “when Democratic turnout is expected to far outpace Republican turnout because Democrats will be deciding who in their party will challenge President Donald Trump.” Big turnout could be a big problem for Justice Daniel Kelly, an unknown attorney with no previous judicial experience, whom Walker appointed to the high court in 2016.

The composition of the court will be important not just for the Ever’s agenda, but for the battle over redistricting that is sure to ignite after the 2020 census.

On Thursday, Walker emerged from hiding to make clear that he is supportive of the schemes being discussed. “We are not going to retreat, the State of Wisconsin is not going to go backwards,” said the lame-duck governor, who is no stranger to electoral dirty tricks.

In the spring of 2018, Walker failed to schedule special elections when he thought Democratic outrage over Donald Trump would bring voters to the polls. It took three rulings by three state judges to force the governor to schedule the elections as required by law.

If they start moving around election dates, the GOP “will waste tremendous amounts of time, confuse voters, and spend taxpayers’ dollars willy-nilly in order to try and rig the process, but it’s clear the people of our state are no longer going to stand for it,” said Chheda.

But the dirty tricks may not be limited to ones the legislators discuss in public. A lame duck session could lead to a host of other attacks on the governor’s power.

“Robin Vos was not elected governor. Tony Evers was elected by a clear and convincing margin to provide not only his vision for Wisconsin, but also as a check and balance on the excesses of the passes of one-party Republican rule the last eight years,” said Scot Ross of One Wisconsin Now, the group that brought the voter ID lawsuit.

“By selecting Evers, voters turned away from the politics of division. Vos shouldn’t be doubling down on divide and conquer,” Ross said.