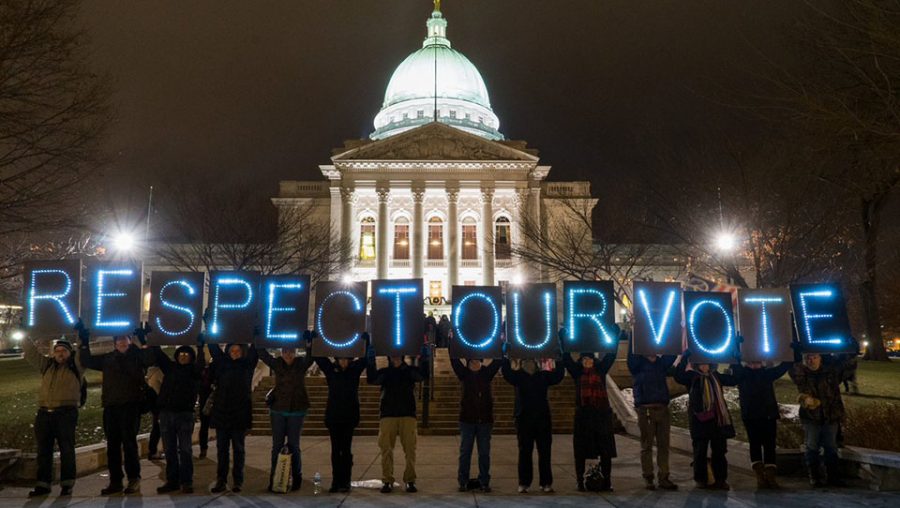 Wisconsin elected the state’s respected school superintendent as governor on November 6. Now a disgruntled GOP leadership is schooling the nation on hypocrisy and partisan power grabs.

After an all-nighter Wednesday, Speaker Robin Vos and Senate Majority Leader Scott Fitzgerald succeeded in passing a package of bills to diminish the power of newly elected Democratic Governor Tony Evers and Attorney General Josh Kaul, and they will truncate early voting hours while they are at it.

It was called an “Extraordinary Session,” and it was an extraordinary week that made national and international headlines, including “The Republicans’ post-midterm strategy: Thievery” in the Washington Post. “What Republicans didn’t win at the polls, they would seek to preserve by pilfering,” said Dana Milbank, writing of the Wisconsin and Michigan lame ducks as well as the North Carolina election fraud.

So Much for the Honeymoon

Usually the election of a new governor, especially one as well-known to the legislature as Evers is, would usher in a honeymoon period of bipartisan cooperation.

But within 24 hours, Speaker Vos started publicly speculating about curtailing the power of the new governor. When the press reacted with an avalanche of skepticism, the insulated speaker was taken aback and quickly polished his talking points.

“As we work to ensure that the branches of government in Wisconsin are equal, it’s important to note that far too many citizens don’t understand the basics of how our Republic works. #coequalbranches,” Vos tweeted Sunday, along with a chart entitled “Americans know literally nothing about the Constitution.”

Predictably, the insult was greeted with outrage. Jay Bullock had the rewrite. 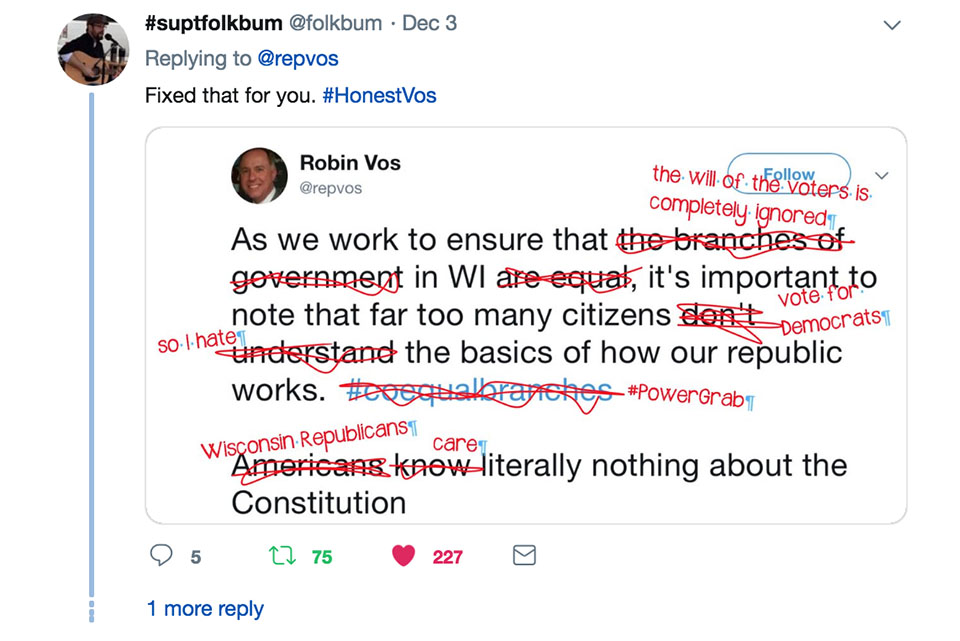 In the lame duck package to “rebalance” the branches of government were measures to: curtail early voting, jigger spring election dates to advantage a right-wing Supreme Court candidate, strip the Attorney General of his authority to appoint counsel, implement work requirements and drug testing for Medicaid, limit the use of prevailing wage in road contracts, and stop the governor from withdrawing from a lawsuit against the Affordable Care Act, a key campaign promise of the Democrats. The entire package was one only the Koch brothers could love, and indeed they were rare public supporters of the lame duck.

Legislative leaders had a press conference to explain the bills on Monday.

What does limiting early voting have to do with coequal branches of government? Not much.

“It’s so irritating to turn on TV in Milwaukee and watch the local news and there are people voting on a regular basis, and yet when I go down to my own town hall in rural Wisconsin, the lights are off and there is nobody there,” claimed Fitzgerald to a skeptical press who knew his previous attempts to curtail early voting had been ruled unconstitutional by a federal court.

Vos was a bit better at sticking to the talking points.

“If you read the Constitution, the first branch that is mentioned is the legislative because that is supposed to be the most representative of the people,” said Vos. The pompous proclamation and the use of the word “supposed” generated disbelieving laughter.

At the forefront of everyone’s minds was the actual results of the election that had been certified by the state elections board that very day. Democrats swept every statewide constitutional office and the U.S. Senate, but only picked up one seat in the Wisconsin Assembly.

As UW Political Science Professor Barry Burden put it, “the state posted the official 2018 Assembly election results. It’s a beautiful gerrymander. Dems got 190,000 more votes but Reps got 63/99 seats.” A challenge to the hyper-partisan, gerrymander was ruled unconstitutional in federal court in a case that is still being litigated. 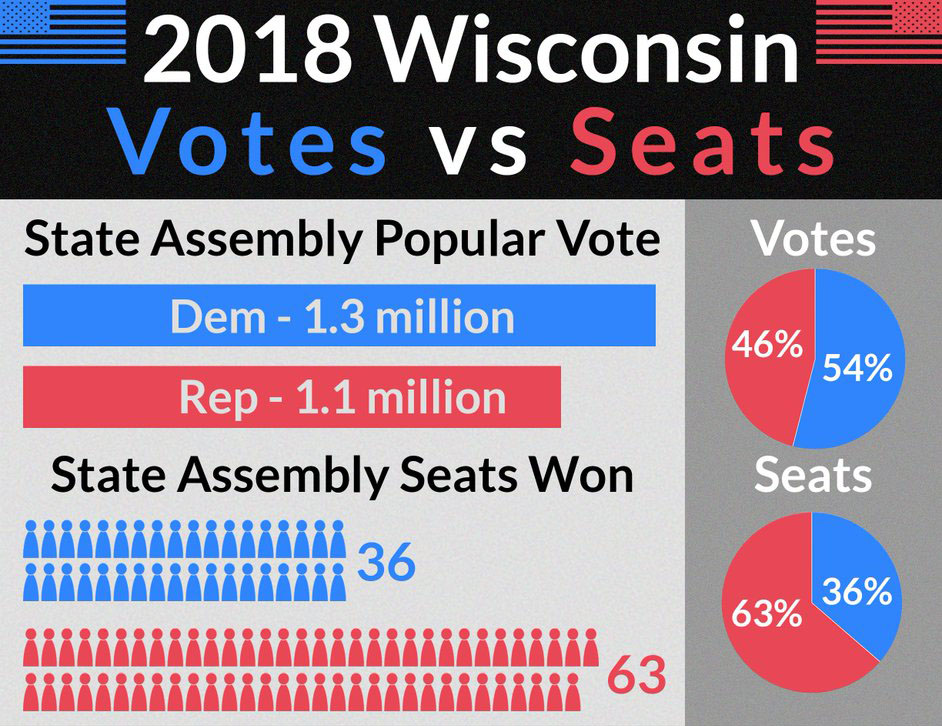 Talking Points Go Out the Window

But the leaders could not stick to their “coequal” talking points for long.

The tone-deaf Vos said something very similar as he opened debate on the floor the next day. “We are going to have a very liberal governor who is going to enact policies that are in direct contrast to what many of us believe in,” he explained to his GOP colleagues. MSNBC’s Chris Hayes was so astounded by the comment, he played the clip in full on “All In.”

Vos is correct, some basic principles of governance are involved here.

1) Politicians are not supposed to call “extraordinary sessions,” effectively an emergency meeting of the state legislature, to attack their political opponents. The peaceful transition of power in a democracy is not an extraordinary circumstance.

3) Moreover, “you don’t change the powers of the office for which you just had elections after the elections take place,” said the Attorney General-elect, who lost a large number of staff and chunks of authority under the bill.

“This is just not the process we should have in an advanced democracy,” said Kaul.

The original justification for the lame duck, an aid package to keep a Kimberly-Clark paper plant from closing, was abandoned before the session got underway, as was the pretense that they would do anything to protect Wisconsinites from discrimination for preexisting conditions. After late-night wrangling over such a measure, Republicans were forced to abandon it when they couldn’t get the votes in their own caucus. Another hypocritical promise fallen by the wayside.

An “Inferno of Controversy”

The bills were introduced at 4:30 p.m. on Friday. After a public hearing Monday in which 1,426 people registered opposition and one lone fellow (who also did not like people early voting) testified in favor, and a mass protest called by Indivisible to “respect our vote,” the package was amended in the middle of the night to take out a few of the more glaringly unconstitutional provisions.

The state’s municipal and county clerks successfully put the kibosh on the idea of having a third spring election to benefit a single supreme court candidate. Lisa Tollefson, the Rock County Clerk prepared an important graph for the legislature to show how impossible overlapping elections would be for overlapping absentee ballots, early voting, and more.

The bills were rewritten and handed out again to exhausted legislators at 4:00 a.m. Wednesday morning, after an all-night session. They were voted upon within hours. The scores of provisions passed will have significant impacts on Evers’ ability to govern, promulgate rules, interact with the federal government, and ensure that he has appropriate counsel to represent the state in court.Lawyers are still pouring over the details.

Evers put it best. “The entire thing is frankly a hot mess,” he said as he called upon Walker to veto the measure.

If Walker wants to end his tenure as a statesman, he will consider Evers’ request. Otherwise Walker will, as Ed Pilkington of the Guardian put it, “bookend his eight years in office in an inferno of controversy.”

As for Vos, he will take his interpretation of good governance to the National Conference of State Legislators, where he’ll serve as president starting in the fall.