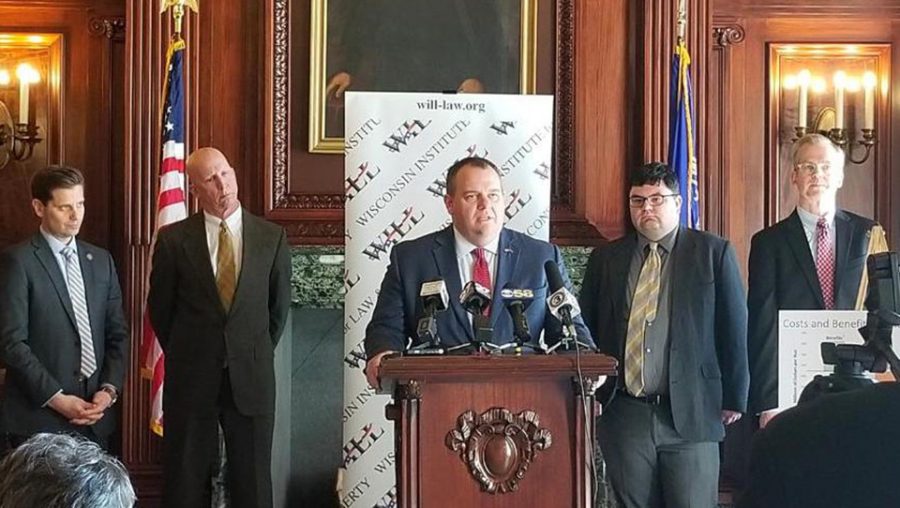 Update: After this article was published, Laura Dague, PhD, Brendan Saloner, PhD, Marguerite Burns, PhD, Donna Friedsam, MPH wrote a response to the WILL/CROWE report, The Fiscal Effects of a Wisconsin Medicaid Expansion: Reasons to Question the WILL/CROWE Reports Conclusions,where they concluded “that the contents do not justify the authors’ conclusion.” Loyola University Professor Tim Classen has also called for retraction of the report.

On his first day in office, Gov. Tony Evers issued an executive order directing the Department of Health Services to craft a plan to meet Evers’ campaign pledge to expand Medicaid, the public health insurance program for the poor and disabled.

Not only was this a key promise in his campaign, but a Marquette University Law School poll on January 24, 2019, found that 62 percent of Wisconsinites want to expand Medicaid in the state while 25 percent oppose doing so. And when broken down by party, Republicans support it 43 to 41.

On Tuesday, Wisconsin Republican State Senators Dave Craig, Duey Stroebel, and Chris Kapenga held a news conference to unveil a new study from the Wisconsin Institute for Law & Liberty (WILL) and the University of Wisconsin-Madison’s Center for Research on the Wisconsin Economy (CROWE) claiming that expanding Medicaid in the state (BadgerCare) would cost taxpayers a whopping $600 million.

The methodology was quickly debunked by experts. “This study has several methodological and analytical flaws that substantially compromise the validity of its conclusions,” Donna Friedsam, health policy programs director of UW-Madison’s Population Health Institute, told the Wisconsin State Journal.

“Incredibly sloppy & dishonest work with pathetic attempts at empirical estimation. This is so below your abilities @Bellmanequation Makes me sad that program with reputation for careful policy work @WIeconomics is associated with this garbage. Numerous inaccuracies in report,” Tim Classen, Loyola University of Chicago economist tweeted.

While the focus was on costs at the press conference, Craig, Stroebel, and Kapenga failed to mention who funded the study. The authors of the report, WILL’s Will Flanders and CROWE’s Noah Williams did not disclose the source of the study’s funding either, a regular practice for academic studies.

But the funders of the groups behind the study are known: the Milwaukee-based Bradley Foundation and the billionaire Koch brothers.

WILL, has received over $4.6 million from the Bradley Foundation over the years. Bradley funds WILL to be a “regional” litigation center for a number of groups and causes. But here in this state, Bradley calls WILL its “MVP of the Wisconsin Network,” a group of institutions, including the MacIver Institute, the Badger Institute, Media Trackers, American Majority, and others funded by Bradley as “infrastructure” to surround and support GOP politicians and policies.

Michael Grebe, the long-time head of Bradley who created the Wisconsin Network and has worked to build right-wing infrastructure in states across the nation, as the Center for Media and Democracy (CMD) reported in a series of articles, is now on the Board of Directors at WILL. Grebe served as the chair of Walker’s 2016 failed Presidential bid, as well as the chair of his gubernatorial campaigns.

And Craig, Stroebel, and Kapenga have Koch ties as well. Craig and Kapenga have ties to the Koch-funded pay-to-play operation that places corporations behind closed doors with state lawmakers to write model bills known as the American Legislative Exchange Council (ALEC) and all three have been praised by the Kochs’ astroturf group Americans for Prosperity (AFP) for passing legislation on the Koch wish list.

In covering this press conference, the Milwaukee Journal Sentinel and the Capitol Times both failed to mention the Koch and Bradley funding behind the study, only the Wisconsin State Journal revealed funding and talked to experts.

Wisconsin is an outlier, only 14 states have rejected federal funds to cover low-income families and children in need of health care. Koch groups have been a major player in these states and on this specific issue.

The Koch-backed State Policy Network (SPN), a web of right-wing “think tanks” in 49 states, used its state affiliates in each of these states to present reports concluding that Medicaid expansion was too expensive. WILL is a member of SPN and is just following the template laid down by other SPN groups.

While these groups argue in public that the free market will better deliver health care services than any federal program, behind closed doors they tell a different tale.

The Bradley Foundation’s opposition to expanding Medicaid is not well-known, but internal documents examined by CMD demonstrate its position clearly. In a 2013 Grant Proposal Record for the Physicians for Reform Foundation (PFRF), Bradley staff details the organization’s belief that Medicaid expansion will lead to single payer:

While there are many arguments against states’ Medicaid expansion, [Dr. C.L.] Gray and PFRF are quite keen on and good at making the one that such expansions are purposely meant by the President and his allies to begin to pave the way for a single-payer health-care system in America.

Another 2014 Grant Proposal Record to the Liberty Foundation of America reveals more of Bradley’s work to prevent Medicaid expansion. In the $175,000 grant, Bradley staff writes:

On Medicaid policy in particular, working closely with and relying upon help from the Bradley-supported Foundation for Government Accountability (FGA), the Liberty Foundation targeted 10 states and allied itself with state-partner think tanks in each of them. In six of these states, Medicaid expansion was rejected. Earlier this year, Bradley awarded Liberty Foundation another $250,000 for its general operations, to expand its efforts on this issue and others.

FGA received $550,000 between 2014 and 2015 to fight Medicaid expansion and they partnered with groups in the state to battle expansion.

The truth is Medicaid is a critical program with an excellent long-term return on investment that saves lives every day. As Gov. Evers readies his budget and prepares for negotiations with the GOP-controlled legislature, it is certain that the $900 million Bradley Foundation and its “network” of groups will be ready to attack Evers’ proposals at every turn, that is what they are funded to do. The question is, are the Democrats ready for it?