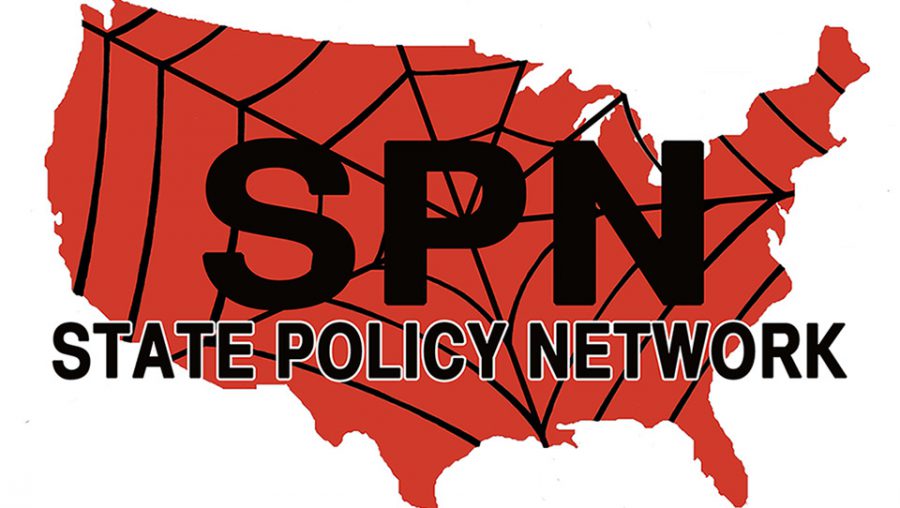 The State Policy Network (SPN) and its main members have collectively brought in annual revenues of over $120 million in the most recent tax year reported, according to an analysis by the Center for Media and Democracy (CMD), a 45 percent increase since the last time CMD reported on SPN’s overall financials in 2013.

SPN, a web of right-wing “think tanks,” advocacy groups, and other registered nonprofits in all 50 states, Washington, D.C., Canada, and the United Kingdom, has 64 main or “affiliate members,” and 98 “associate members.” Just two weeks ago, SPN held its annual meeting at the five star Broadmoor resort in Colorado Springs, Colorado, in which close to 1,000 staff from SPN groups, funders, lawyers, and corporate lobbyists registered to attend.

CMD analyzed the latest IRS filings of SPN and its 64 affiliates, most of which were for the year 2017, to gain an overall financial picture of the network that is instrumental in pushing a right-wing agenda in state houses. Total expenditures of those groups were $115 million. Surprisingly for a group of nonprofits, net assets for the network added up to $93.5 million.

SPN groups play an integral role in getting legislation passed in state legislatures by providing academic legitimacy when called upon to testify at hearings or through the production of “studies.” That legislation is often drafted as model bills by corporate lobbyists and lawmakers at the American Legislative Exchange Council (ALEC).

In recent years, many of the SPN main groups have set up in-house litigation centers to challenge state laws that stand in the way of their agenda or to protect laws that are part of it.

The litigation centers are part of a “state-based litigation alliance,” that was launched by  Clint Bolick, now an Arizona Supreme Court Justice, with $350,000 in seed money from the Lynde and Harry Bradley Foundation in 2014.

Tracie Sharp, president and CEO of SPN, reportedly said at the annual meeting in 2013 that “the donors have a very specific idea of what they want to happen” and that “the grants are driven by donor intent.”

The Austin-based Texas Public Policy Foundation (TPPF) brought in $12.1 million in revenue in 2017, the most of any SPN affiliate, according to CMD’s analysis of the latest IRS filings. TPPF’s revenue was $3.6 million more than the next two largest groups, the Illinois Policy Institute and the Mackinac Center in Michigan.

TPPF, like all 501(c)3 registered nonprofits, is not required to disclose its donors, but a 2012 Texas Observer investigation revealed that, “TPPF gets a majority of its funding from a relatively small group of major corporations, conservative foundations and wealthy individuals with a financial interest in the type of policies that TPPF promotes.”

TPPF regularly spreads misinformation on the climate crisis to the benefit of the fossil fuel industry. In 2019 alone, TPPF has held four events to attack San Antonio’s plan to get the city carbon neutral by 2050. And on October 23, senior fellow Mandy Gunasekara defended the fossil fuel industry in front of the U.S. House, claiming that, “Our successful energy industry is also why we lead the world in environmental progress.”

John Tillman, chairman of the Illinois Policy Institute (IPI), is the highest paid executive in the SPN, receiving $423,190 in compensation in 2017. Tillman, along with former CEO of the Goldwater Institute Darcy Olsen, are the only executives making over $400,000.

Tillman, who works for a number of other right-wing nonprofits, was found to collect “pay that was often well above what comparable organizations in other states paid their leaders,” the Chicago Sun-Times reported in 2018. The same report also questioned Tillman’s reporting of work hours to the IRS, which sometimes collectively reached as much as 75 hours per week.