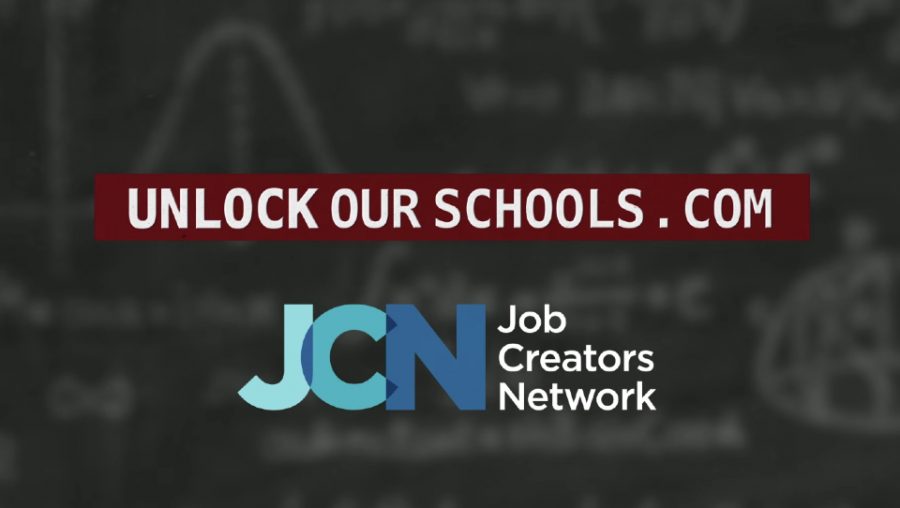 A conservative business lobbying group funded by Republican billionaires and tied to the American Legislative Exchange Council (ALEC) is spending money in an attempt to fully reopen U.S. schools.

In an ad campaign called “Unlock Our Schools,” the Job Creators Network (JCN) blames public school teachers’ unions for full or partial shutdowns of in-person classes, claiming that union leaders are “holding kids hostage” and using the coronavirus crisis to push for policies such as Medicare for All and increased taxes on billionaires, and to oppose school privatization.

JCN has attacked organized labor for years, and its media strategy has been run by Richard Berman, a lawyer who is notorious for using nonprofit front groups, attack-dog websites, and “think tanks” to defend corporate clients such as Monsanto and tobacco companies, and to fight minimum wage, sick leave, and other campaigns.

In a commercial for a parallel campaign called “Flatten the Fear,” several doctors with ties to JCN or other right-wing advocacy groups urge communities to open up their economies. JCN posted the video to YouTube on June 4 as coronavirus infections, hospitalizations, and deaths were skyrocketing in the South and West due to premature business reopenings. Around the same time, JCN bought a full-page ad in The New York Times and reserved a billboard in Times Square in New York City.

The money behind JCN and its high-profile ad campaigns has come from right-wing billionaire megadonors such as Bernie Marcus, Robert Mercer, and Philip Anschutz in recent years. These and other business executives also double as major Republican donors to the Republican Party and GOP political campaigns and independent election spending groups.

Roughly 2,000 doctors signed a July 24 JNC petition calling for the reopening of elementary and middle schools this fall. A press release announcing the petition quotes doctors who lead conservative nonprofits. C. L. Gray of Physicians for Reform, Kristen Held of the far-right Association of American Physicians and Surgeons, and Lee Gross of Doctors 4 Patient Care provided quotes for the release. The latter group is a member of the State Policy Network (SPN), a web of right-wing think tanks that work with ALEC and advocate deregulation and free markets.

Gray is a member of Save Our Country, a conservative coalition founded by Stephen Moore of the Heritage Foundation and FreedomWorks that includes leaders from ALEC, the Tea Party Patriots, SPN, and the Council for National Policy, which helped organize early protests of state lockdowns. Alfredo Ortiz, who is CEO of JCN, is a steering committee member of Save Our Country.

A webinar this spring that included JCN was hosted by Lawson Bader, president and CEO of the right-wing funder DonorsTrust. The session featured institutional recipients of DonorsTrust grants and highlighted “policy as a fundamental part of any recovery.” Elaine Parker, president of the Job Creators Network Foundation, a recipient of some of these funds, spoke on the call and explained the group’s “advocate program” to reopen society.

The program centered on doctors and involved “writing and placing op-eds and placing physicians and small business owners in the media” to “reassure Americans that we can safely reopen society.” JCN had been building a network of free-market doctors to promote health care reform, Parker said, and the group harnessed that network to give people “permission” to go back to normal. The 90-day campaign featured films of doctors and a social media push.

As conservatives continue to pressure secondary schools to reopen, and school districts and universities close back down after inevitable COVID-19 outbreaks, The American Academy of Pediatrics (AAP), American Federation of Teachers, National Education Association, and the School Superintendents Association urge caution.

“Although the AAP strongly advocates for in-person learning for the coming school year, the current widespread circulation of the virus will not permit in-person learning to be safely accomplished in many jurisdictions,” the coalition stated in its July guidance.

JCN donated $15,000 to ALEC in 2018, according to tax records, indicating that it is likely a member. ALEC, a pay-to-play network that brings corporate lobbyists and state legislators together to write model legislation, has worked to privatize school districts in the states.

“The Voice of Main Street”

While JCN calls itself “the voice of Main Street,” it is bankrolled by right-wing billionaires who made their money as anti-union business executives. Building on a 2018 Sludge report, CMD has uncovered $11.5 million in JCN funding since 2011, much of which came from the family foundations of GOP megadonors Bernie Marcus, Robert Mercer, and Philip Anschutz.

The largest donor to the JCN groups was the Retail Industry Leaders Association, a trade association that gave its largest annual amount, $1.2 million, in 2018, the most recent year for which tax records are available.

Next was Marcus, who co-founded JCN with the recently deceased Herman Cain. The Home Depot billionaire donated $3.9 million to the group from 2011-2017.

Other top donors include Pharmaceutical Research and Manufacturers of America, Big Pharma’s biggest U.S. lobbying group and a member of ALEC, which gave $500,000, and entertainment executive and sports owner Philip Anschutz, whose family foundation gave $300,000 from 2012-2016.