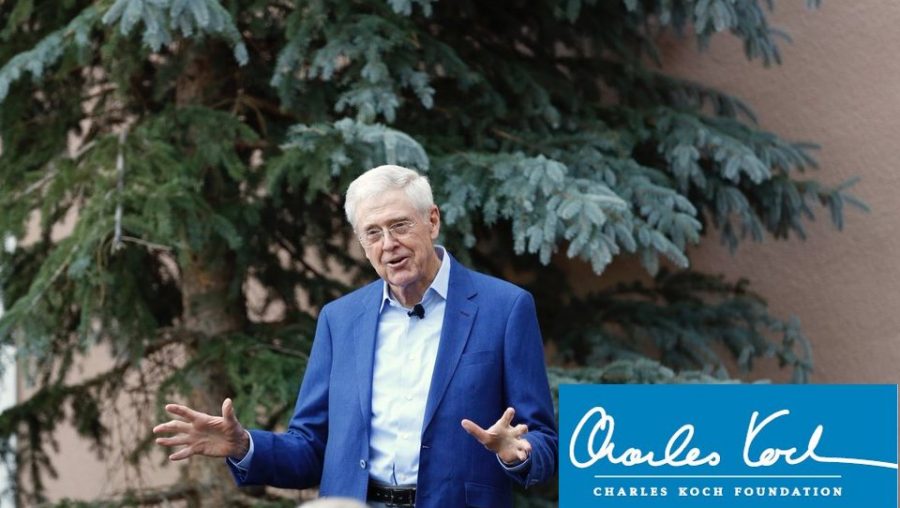 The personal foundation of Charles Koch, CEO of Koch Industries, distributed $141.2 million in grants in 2019 to higher education, right-wing organizations, and other causes an analysis of its latest IRS filing obtained by the Center for Media and Democracy (CMD) shows.

The Charles Koch Foundation (CKF) brought in $66.7 million in revenue in 2019, and distributed $13.7 million more than in the previous year, bringing its total assets to just under $700 million.

CKF distributed a whopping $100.8 million in grants in 2019 to universities and colleges in the United States and abroad, an increase of $16.4 million from 2018. Once again, Koch–favorite George Mason University topped all higher education recipients with $22.6 million in grants, $5 million of which went to the Institute for Humane Studies.

Overall, 24 universities received over $1 million from CKF in 2019. Charles Koch has been ramping up his higher education spending in recent years. Greenpeace calculated that between 2005 and 2017, Koch Foundation funding to universities totaled $256.8 million, and now Koch is contributing more than $100 million per year.

Koch told a gathering of his peers in 1976 to “focus on ‘attracting youth’ because ‘this is the only group that is open to a radically different social philosophy,'” according to Jane Mayer, author of Dark Money.

For Koch to realize his vision of a libertarian, free market society, he needs trained youth to fill positions in the right-wing infrastructure he has built along with allies such as the Bradley Foundation, Searle Freedom Trust, Sarah Scaife Foundation, and others. In addition to higher education funding, Koch has given to right-wing organizations that focus on youth movement building such as Young Americans for Liberty Foundation ($364,907), Young Voices ($92,423), Students for Liberty ($12,929), and many more.

CKF distributed close to $2.5 million in grants to the State Policy Network (SPN), a web of right-wing “think tanks” and tax-exempt organizations in 50 states, Washington, D.C., Canada, and the United Kingdom.

Thirteen of the 64 “affiliate” members received CKF funding in 2019, with Texas Public Policy Foundation receiving the largest amount at $1.5 million.

SPN member groups are called on in the states to provide the academic legitimacy for right-wing policy ideas through public hearing testimony at state capitals, research, and media.

Many of the right-wing policies are drafted as American Legislative Exchange Council (ALEC) model bills and introduced by state lawmakers — almost all of whom are Republican — into their respective legislatures. ALEC received $489,211 from CKF in 2019.

Charles Koch gave over $6.2 million to ten groups working to get the U.S. Supreme Court (SCOTUS) to take a case that could seriously hamper state corruption investigations into tax-exempt non-profits.

The Koch-backed case, Americans for Prosperity Foundation v. Becerra, will decide whether requiring nonprofits to reveal their largest donors to the state violates the constitutional right to free speech and association, even though that information is kept confidential from the public. Ten Koch Foundation 2019 grantees filed amicus briefs in favor of SCOTUS accepting the case.

The U.S. Court of Appeals for the Ninth Circuit ruled in favor of California and the constitutionality of the disclosure requirement in 2018, but Koch’s Americans for Prosperity Foundation hopes that a conservative-dominated SCOTUS will reverse the decision.

Many of the groups are also litigating against COVID health restrictions.

For example, “The New Civil Liberties Alliance (NCLA)—a group with a mission to fight the ‘unconstitutional administrative state’—went to court on Sep. 8 representing Virginia landlord Rick Brown, arguing that the CDC did not have the legal authority to prevent Brown from evicting clients who can’t pay rent and replacing them with those who can afford market-rate rents,” CMD reported.

In analyzing the CKF 2019 IRS filing, CMD found that Koch also distributed millions to donor conduits set up to hide the funders of nonprofits. CKF gave $1 million to Fidelity Charitable, $1 million to Greater Horizons, and $25,000 to DonorsTrust, the preferred funding vehicle of the larger Koch political donor network.