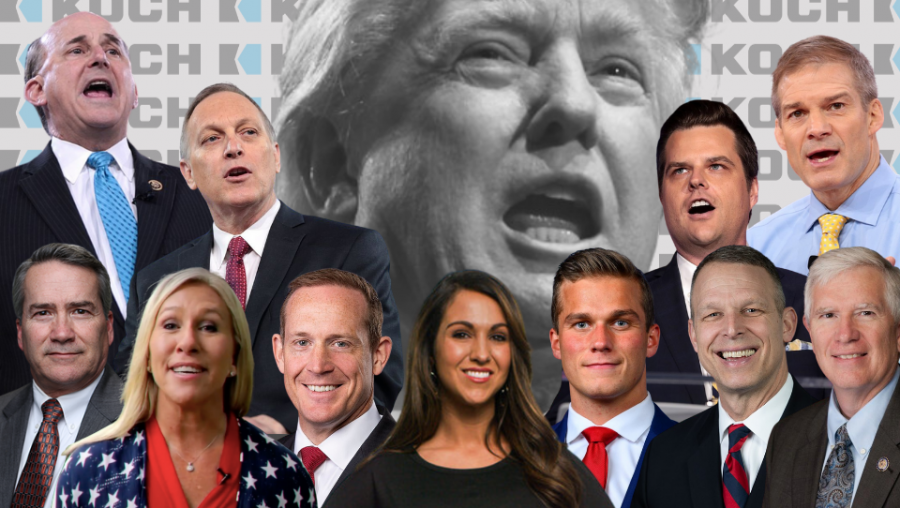 The featured image was created from official congressional portraits and photos by Gage Skidmore, YouTube/Marjorie Taylor Greene, and laurenforcolorado.com.

Dozens of corporate PACs have bankrolled the campaigns of Republican representatives who will do President Donald Trump’s bidding and try to overturn democracy in early January, a CMD review of campaign finance data has found. Koch Industries is the top corporate PAC donor, and the National Association of Realtors is the top trade association PAC contributor, to these right-wing politicians.

Trump lost the Electoral College 306-232 to Joe Biden, who earned over seven million more votes than his opponent. The results became official on December 14, when the Electoral College met to ratify the results. Trump’s fringe legal team has lost more than 50 frivolous lawsuits alleging nonexistent voter fraud, often suffering embarrassing defeats and stern reprimands from judges. Now Trump and the Republican National Committee face a lawsuit for conspiring to violate the rights of Black voters with their constant, completely unfounded efforts to overturn or undermine the election results in heavily Black areas such as Detroit, Milwaukee, Philadelphia, and Atlanta.

Nonetheless, a coterie of some of the most extreme right-wingers in Congress met with Trump on Dec. 21 to plan one final attempted coup. On January 6, Congress will convene in a joint session to certify the Electoral College votes, the very last step in the presidential election process. Members of the House Freedom Caucus—Andy Biggs (AZ), Mo Brooks (AL), Matt Gaetz (FL) Louie Gohmert (TX), Jody Hice (GA), Jim Jordan (OH), and Scott Perry (PA)—were reportedly at the meeting and plan to challenge the Electoral College electors.

On Dec. 27, Gohmert went even farther than his colleagues, suing Vice President Mike Pence and asking a federal court to give Pence “exclusive authority” to decide which Electoral College votes to count on Jan. 6.

If a senator also formally challenges the electors, the two chambers of Congress will separately debate and vote on whether to accept the electors. Sen.-elect Tommy Tuberville (R-AL) is considering a challenge. The effort would surely fail and only delay the certification by a few hours, but its participants may be motivated to appease their right-wing voter base and raise money from their attempt to subvert democracy.

Also joining the meeting with Trump was incoming Georgia Rep. Marjorie Taylor Greene, an adherent of the conspiracy theory-driven QAnon movement, a domestic terror threat. After the meeting, Representative-elect Lauren Boebert, who has supported QAnon, said she would contest the electors, as did Rep. Ted Budd (R-NC). Madison Cawthorn, who won the race for North Carolina’s 11th Congressional District and previously made some strange social media posts about Adolf Hilter, told the crowd at a recent Turning Point USA event that he will join the Trump loyalists on Jan. 6.

Numerous corporate PACs have boosted the campaigns of these right-wing representatives who currently seek to overturn the presidential election. CMD identified 122 PACs of corporations and trade groups that have given at least $10,000 to the 11 representatives for a total of nearly $4.4 million.

Topping the list of single company PACs is the PAC of Koch Industries, the fossil fuel conglomerate owned and led by billionaire GOP megadonor Charles Koch. In 2020, Koch PAC donated $40,000 to the campaigns of five Republicans who met with Trump about the coup attempt—including the maximum allowed contribution amounts in the primary and general elections to Biggs, Hice, and Jordan. Altogether, Koch PAC has given $198,500 to the campaigns of seven coup promoters over their political careers, the most of any single company PAC.

Charles Koch recently published a new book and is attempting to rebrand himself as a “uniter” who has some regrets about fueling political partisanship. Koch’s latest public relations effort is dubious, given his unflinching, right-wing ideology and lengthy record of funding far-right think tanks, political advocacy groups, and Republican candidates, not to mention his premier political group’s massive spending on behalf of Sen. David Perdue, who is defending his seat in a close race that could determine control of the Senate next term.

After reports that Koch PAC donated the maximum allowed amount, $5,000, to the QAnon-affiliated Greene, the company claimed to have asked for a refund. However, Greene’s campaign finance reports since then do not list a refund.

In addition to funding campaigns directly, Koch Industries is the biggest donor to Americans for Prosperity Action, the super PAC affiliate of Charles Koch’s top political spending group. In the 2020 cycle, Koch Industries delivered $16 million to the super PAC, which spent money on independent expenditures boosting the re-election bids of Budd ($111,000) and Perry ($543,000 supporting Perry or attacking his opponent).

In the 2020 elections, the PAC of the trade group the National Association of Realtors, which represents real estate brokers and property managers, gave the highest total to the coup enthusiasts: $44,000 to the campaigns of Biggs, Brooks, Budd, Gohmert, Jordan, Hice, and Perry.

PACs from individual defense and telecommunications companies, including AT&T, Boeing, Comcast, Cox Enterprises, Northrop Grumman, and Raytheon, were among the biggest donors to the members of Congress who are eager to scrap the election results. Company PACs in the tech industry (Amazon, Google, and Intel), gas and electric utilities (Alabama Power, FirstEnergy, Pinnacle West Capital, and Southern Company), and the finance and insurance sector (AFLAC, Blue Cross/Blue Shield, Capital One, Goldman Sachs, and Truist Financial) have also delivered large amounts to these representatives.