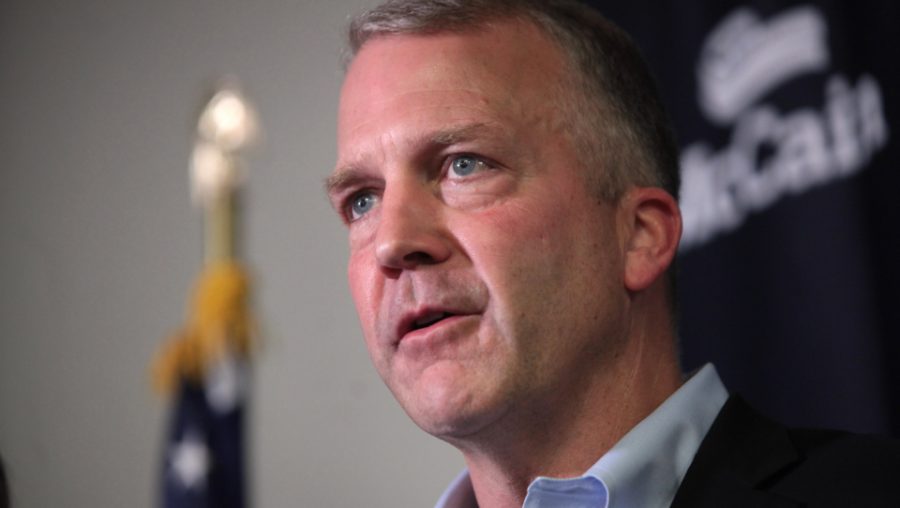 This article was produced in partnership with Sludge and co-authored by Donald Shaw.

As the Senate moves towards a vote on confirming Rep. Deb Haaland (D-N.M.) as the secretary of the Department of the Interior next week, a question mark remains around how Alaska Republican Sen. Dan Sullivan will vote. The rest of the Alaska delegation—GOP Rep. Don Young and GOP Sen. Lisa Murkowski—have said they will support Haaland’s confirmation, but Sullivan has stayed mum. Haaland would be the first ever Native American Cabinet secretary.

Alaska is more impacted by Interior Department policy than any other state because more than 60% of its land is federally owned. President Biden temporarily paused new fossil fuel extraction leases on federal land through an executive order in January (but did not reverse a surge of leases provided by the previous administration), and Haaland has said she intends to pursue an expansion of renewable energy projects on public lands if confirmed to the position.

In a statement to HuffPost, Sullivan spokesperson Nate Adams said the senator “has concerns that Congresswoman Haaland will reverse the progress that the Alaska delegation has made on critical energy projects.”

While Young, Murkowski and Sullivan share the same constituents, and all three count the oil and gas industry among their top campaign donors, Sullivan is unique among them in having a substantial portion of his personal wealth invested in a company that could be negatively impacted by policies that constrain the fossil fuel industry.

Sullivan owns between $1 million and $5 million worth of shares in RPM International, a family business that makes chemical products derived from petroleum, including several product lines that are designed for use in fossil fuel extraction and shipping. He made multiple sales of the company’s shares last year, pocketing as much as $300,000, according to periodic transaction reports filed with the Senate Office of Public Records.

The company was founded by Sullivan’s grandfather and is now run by his brother Frank Sullivan, while another brother is a vice president. Among its many brands is ValvTect, which describes itself as “the leading U.S. supplier of fuel additives to fuel distributors,” and Specialty Polymer Coatings, which makes coatings for the global oil and gas pipeline industry. RPM’s Carboline makes coatings and fireproofing products that are used in the oil and gas upstream industry, particularly on offshore drilling rigs.

In its annual Securities and Exchange Commission (SEC) filings, RPM International says that many of its raw materials are petroleum-based derivatives and changes in the supply of raw materials could have a significant impact on its business. In 2006, the company told the SEC that “environmental laws and regulations could subject us to significant future expenditures or liabilities, which could have an adverse impact on our business.”

RPM International’s PAC and employees have also been top donors to Sullivan’s election campaigns. The company’s PAC has given Sullivan $15,000, while its employees have given him $137,775. In the 2020 election cycle, those employees were mostly executives and included the senator’s brother Thomas Sullivan, Jr., a vice president at RPM who gave the maximum allowed amount of $5,600. The Center for Responsive Politics found the company to be his third largest career donor and the largest donor to his recent 2020 re-election campaign. An additional $44,000 was donated by RPM employees to Sullivan’s leadership PAC in his most recent election cycle.

Sullivan was first elected to the Senate with the help of a super PAC called Alaska’s Energy/America’s Values that was funded by $375,000 from his brothers.

Other Senators with Conflicts

While Murkowski and Sen. Susan Collins (R-Maine) are backing Haaland, many other GOP senators, including all others on the Energy and Natural Resources Committee, will likely oppose her nomination. Some of those senators—including Sens. Steve Daines (Mont.), who opposes Haaland and used a procedural move to delay her confirmation vote—are among the chamber’s top recipients of campaign donations from oil and gas company PACs and employees, and some are personally invested in the oil and gas extraction industry.

As the Center for Media and Democracy and The Guardian reported, Sen. John Hoeven owns dozens of oil well interests in his state of North Dakota, as well as six-figure investments in several oil companies. A dependent child of Sen. Roger Marshall (Kansas) owns as much as $730,000 in oil royalty and working interests, which made up to $232,000 in profit in 2019. Sen. John Barrasso of oil-rich Wyoming, the ranking member on the Energy Committee, has received $1.2 million in campaign contributions from oil and gas PACs and employees and owns between $250,000 and $500,000 of stock in Berkshire Hathaway, whose subsidiaries’ 16,300 miles of pipeline transported 8% of the natural gas Americans consumed in 2019.

The Senate is set for a cloture vote on Haaland’s nomination at 1:30pm Thursday and a confirmation vote next week.

Sullivan’s office did not respond to a request for comment.

All articles by Donald Shaw