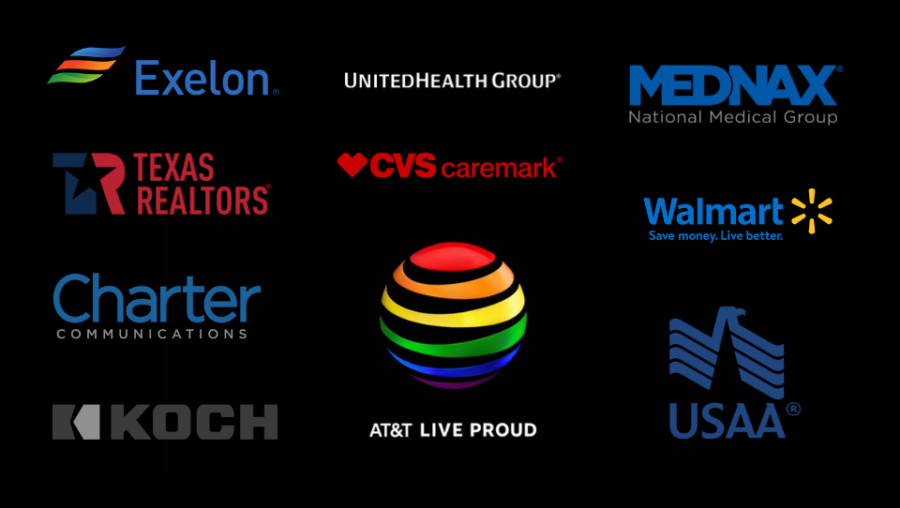 Major corporations and business associations donated millions of dollars to the campaigns of 13 Texas state senators who introduced one of the most extreme anti-transgender bills of the year.

The proposed legislation is part of a seemingly coordinated wave of anti-trans bills being proposed by Republican politicians around the U.S. who are seeking to make transgender rights a dominant culture war issue and inflame their voting base.

Senate Bill 1646, introduced in March, would classify gender-affirming care for minors as child abuse, meaning the state would take trans kids away from their parents’ homes if they receive such care. It would also mean criminal penalties for physicians who perform this care.

The Center for Media and Democracy (CMD) has identified 64 companies and trade groups or their political action committees (PACs) that have given at least $75,000 to the bill’s sponsors over their careers, amounting to close to $14 million. Those entities donated nearly $2.6 million to these lawmakers in the 2020 election cycle, enabling them to take their seats this year, according to data compiled by FollowtheMoney.org.

The 64 top donors include business associations such as the Texas Association of Realtors and
the Independent Insurance Agents of Texas and companies such as AT&T, Charter Communications, Koch Industries, and USAA.

Some of the companies publicly tout their commitment to their LGBTQ employees despite their roles in boosting the careers of these discriminatory lawmakers.

Telecommunications giant AT&T proudly documents its history of supporting the LGBTQ community, supports the federal Equality Act, and “has a strong partnership with GLAAD, the world’s leading LGBTQ+ media advocacy organization.” It is part of the Human Rights Campaign’s business coalition supporting the Equality Act, a bill that’s currently before the U.S. Senate.

Today, we observe the lives lost to anti-transgender violence. We pledge to do our part to #TurnUpTheLove today & every day. #TDOR pic.twitter.com/k0aR4gqZyv

Charter Communications has an LGBTQ “business resource group” and is a member of the National LGBT Chamber of Commerce. Prominent LGBTQ rights organization the Human Rights Campaign gave Charter a score of 90 out of 100 in its Equality Index. But the telecom company and Time Warner Cable, which it absorbed a few years ago, are some of the anti-trans senators’ biggest donors.

The two companies’ PACs have combined to donate over $365,000 to the anti-trans lawmakers. Time Warner stopped making donations after the 2018 election cycle, but Charter gave $93,500 to the senators in 2020.

Insurance conglomerate USAA, also a member of the National LGBT Chamber of Commerce, got a perfect score from the Human Rights Campaign this year. Its PAC has given $237,000 to the anti-trans lawmakers, including $60,000 in 2020.

Walmart, whose PAC has donated $75,000 to the legislators, including $19,000 in 2020, celebrates its inclusivity and sponsors Pride events, earning a perfect score from the Human Rights Campaign.

In the Walmart family, we show our pride every day, during every shift, and on our vests, like Kenny from Walmart Kingsport. 🏳️‍🌈All people. All love. All pride. pic.twitter.com/9TJa6S8z27

Sen. Charles Perry, the chief author of the bill, has received nearly $840,000 from companies and trade associations that gave $75,000 or more to the bill sponsors. In the 2020 election cycle, those donors provided his campaign with more than $260,000.

CMD previously reported that numerous publicly pro-LGBTQ companies, including AT&T and Walmart, bankrolled the campaigns of Arkansas lawmakers who sponsored two anti-trans bills to criminalize gender-affirming care for trans youth and to ban trans girls and women from sports.

So far, the companies appear to be shirking responsibility for their campaign donations that helped make these anti-trans bills possible.

More than half of transgender and nonbinary youth seriously considered suicide from December 2019 through March 2020, according to a Trevor Project survey. Studies have shown that gender affirming health care such as puberty blockers can save trans lives.

But a number of medical associations and health care companies have contributed significant sums to the anti-trans lawmakers.

The Texas Medical Association, which advocates for physicians, is the third-largest corporate donor to the 13 legislators, having given over $520,000 to their campaigns, including $62,000 in 2020, through its PAC.

“TMA opposes bills that would interfere with the patient-physician relationship and would criminalize the provision of certain health care services,” he said.

The Texas Medical Association’s PAC contributes to candidates based on “their support of medical issues and general legislative philosophy,” said Annear. “As they always do, the PAC will decide about any future political contributions during election season.”

Mednax, a health services company that offers pediatric care, including pediatric surgery, has given the senators nearly $125,000 since 2012.