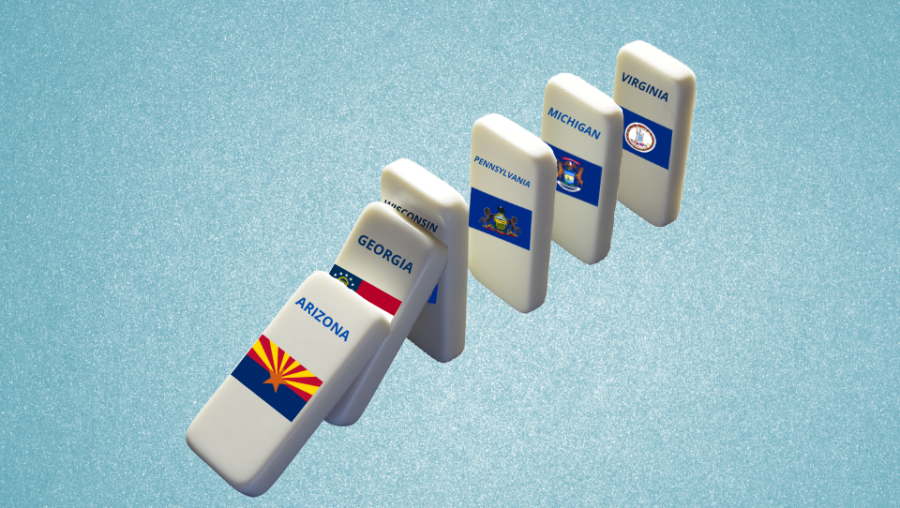 American Legislative Exchange Council (ALEC) lawmakers are hoping to copy and paste the controversial Arizona “audit” of the 2020 November presidential election just like they do model legislation from the corporate bill mill.

The Arizona audit was engineered by ALEC’s treasurer and second highest ranking board member, Senate President Karen Fann (R), the Center for Media and Democracy (CMD) reported. Since ALEC does not have a vice chair this year, Fann is likely next in line to serve as its public face as national chair.

Run by an obscure firm called Cyber Ninjas that promoted “Stop the Steal” conspiracy theories and has never done an election audit before, the process has been called a “fraudit” by Arizona’s secretary of state and denounced by GOP Arizona election officials.

But that hasn’t stopped ALEC’s Fann from touting it as the “gold standard” and Republican politicians from trying to force similar audits in other battleground states.

And Trump himself is spreading the lie that he will be reinstated as president in August, something almost one in three Republican voters now believe is likely to happen, according to a new Politico poll.

ALEC politicians from at least five states including Alaska, Georgia, Pennsylvania, Virginia and Wisconsin have traveled to the Arizona audit site or have plans to do so.

ALEC, registered as a nonpartisan, tax-exempt organization, claimed to have suspended its work on voting and elections in 2012 when it disbanded its Public Safety and Elections Task Force in the wake of public outcry and the departure of corporate members seeking to distance themselves from ALEC’s role in pushing controversial voter ID and “Stand Your Ground” legislation.

But in 2019, ALEC established a secret “Political Process Working Group,” which has actively pushed voter fraud myths and partisan gerrymandering strategies to a receptive audience of GOP lawmakers. Fann is part of that group, which is chaired by fellow Arizona State Rep. Shawnna Bolick (R) as well as disgraced attorney and Trump advisor Cleta Mitchell.

Here are the ALEC politicians seeking to import the Arizona “gold standard” audit to other states.

Alaska Rep. David Eastman (R), a former ALEC state chair who attended the Jan. 6 rally and appears to have marched to the Capitol, was one of the first out of state lawmakers to visit Arizona’s controversial audit.

Just moments ago, Rep. David Eastman from Alaska and State Sens. Burt Jones and Brandon Beach from Georgia were given a tour of the audit. #AZauditpool pic.twitter.com/nWhFHGVg0Q

A hand recount of November’s 2020 election that Trump won in the state was conducted and 24 out of 361,400 ballots cast were found to be different from the electronic count.

Lt. Gov. Kevin Meyer (R) who is in charge of elections in the state told the Anchorage Daily News upon hearing of Eastman’s trip that he was “disappointed.”

Eastman paid for the Arizona visit with taxpayer money from his legislative account.

Spotted on the tour with Eastman by reporter Griselda Zetino were Georgia Republican state Sens. Burt Jones and Brandon Beach, and Georgia’s GOP Chair David Shafer. While CMD is unable to uncover ALEC ties to Jones or Beach, Shafer was involved in ALEC while serving as a representative.

Former State Representative Vernon Jones who is challenging Governor Brian Kemp in this year’s gubernatorial election also observed the audit. Previously a Democrat, Jones switched parties for his love of Trump, which he made official in a speech at the Stop the Steal protest on the day of the insurrection at the Capitol.

A review of Fulton County’s 147,000 absentee ballots has been ordered by a court in Georgia, but has not yet started.

On Wednesday, a PA Delegation consisting of State Senator Doug Mastriano, State Senator Cris Dush, and State Rep. Rob Kauffman will visit the AZ Capitol to meet with members of the AZ Legislature, and then tour the AZ Audit to receive a brief from the forensic audit team.

CMD does not have information to connect Mastriano or Kauffman to ALEC, but Dush was ALEC’s 2020 “Legislator of the Year.” All three lawmakers signed a letter to Pence in a last ditch effort to pressure the vice president to not certify the 2020 election results.

Dush has said that he “absolutely” supports conducting a similar audit in Pennsylvania.

Mastriano, whose campaign spent thousands to bus Trumpists to the D.C. insurrection “told Trump at a one-on-one meeting in New York last month that he could engineer an audit in his state,” The Washington Post reported. His colleagues, however, are not interested.

State Sen. Amanda Chase (R), who The Washington Post reported coined herself “Trump in heels,” also made the trip out to the Arizona audit. The ALEC lawmaker was censured by her colleagues in January for “failure to uphold her oath of office, misuse of office and conduct unbecoming of a senator” over the last two years.

Chase spoke at the Stop the Steal rally on January 6, referred to the insurrectionists who attacked the U.S. Capitol as “patriots,” and refused to denounce the violent attack on the Capitol.

The trip was approved by ALEC lawmaker Speaker Robin Vos (R), who coached ALEC Annual Meeting attendees last summer on how to limit gubernatorial powers in emergencies. In May, Vos hired ex-cops to investigate the November election, one of whom is Republican Mike Sandvick. Sandvick previously worked for True the Vote, a right-wing voter suppression group that receives funding from the Milwaukee-based Bradley Foundation.

Politicians with undocumented ALEC-ties from Colorado, Michigan, Missouri, Nevada, Oklahoma, Tennessee, and Utah have also traveled to the audit site in Arizona.