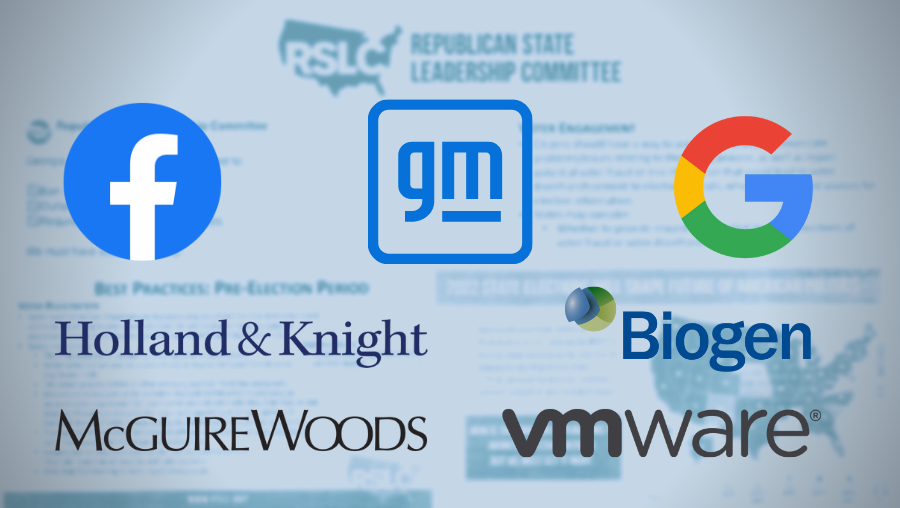 Background adapted from documents obtained by Documented and Popular Information.

On April 14, as Republican state lawmakers proposed sweeping voter suppression bills, The Washington Post printed a statement from the Black Economic Alliance that opposed these laws and stood up for voting rights. Dozens of corporations signed the statement.

“We all should feel a responsibility to defend the right to vote and to oppose any discriminatory legislation or measures that restrict or prevent any eligible voter from having an equal and fair opportunity to cast a ballot,” says the statement.

“Voting is the lifeblood of our democracy and we call upon all Americans to join us in taking a nonpartisan stand for this most basic and fundamental right of all Americans,” it concluded.

At least seven companies that signed the statement also donated this year to the Republican State Leadership Committee (RLSC), the primary fundraising organization for state GOP candidates, which is advocating for voting restrictions. Biogen, Facebook, General Motors, Google, VMWare, and law firms Holland & Knight and the McGuireWoods political action committee all gave to the RSLC in 2021, according to recently released tax records covering the first six months of this year. Still more companies that have publicly defended voting rights on other platforms donated to the group this year.

Just eight days before the Black Economic Alliance statement, the RSLC held a private “policy working group” meeting as part of its “election integrity” initiative, and a number of corporate representatives attended, as Documented and Popular Information revealed. Corporations are required to donate at least $15,000 annually to be part of the group.

The RSLC established its “Commission on Election Integrity” in February. Alabama Secretary of State John Merrill, who promoted the “Big Lie” of widespread voter fraud and urged members of Congress to overturn President Joe Biden’s 2020 victory, was co-chair of the group and led the presentation, which advocated for policies including aggressive voter purges, strict voter ID requirements, and rewarding citizens who come forward with voter fraud allegations, all with the goal of electing more Republicans.

Michigan state Sen. Ruth Johnson, another “Big Lie” conspiracy theorist, was an original co-chair of the “election integrity” commission and remains in charge.

That the group is promoting voter suppression is no surprise, as it has backed harsh bills in the states, many sponsored by lawmakers the group supports. The RSLC also opposes any federal efforts to protect voting rights.

Georgia Senate Republicans have vowed to:

We must have election integrity!https://t.co/O6hp5VkEM5

Google’s State Policy Manager, Joe Dooley, was listed as an attendee of the RSLC “election integrity” working group meeting. To be a member of the group, Alphabet subsidiary Google Energy, which produces and sells clean energy, gave $20,000 to the RSLC in February, preceded by Google Inc.’s $10,000 on Jan. 5.

These donations also appear to contradict the company’s goals of becoming carbon-free by 2030 and helping the world lower carbon emissions. The RSLC, which many fossil fuel companies fund, has long supported the oil, gas, and coal industries, and many of the Republican state lawmakers it backs oppose any action to combat climate change. Some deny the existence of human-caused climate change altogether.

“The oil and gas is what drives the United States and the world. And he cuts everything out from us.”

Dominion Energy didn’t sign the Black Economic Alliance statement, but in February it touted its $1 million donation to the Lawyers’ Committee for Civil Rights Under Law, a group that advocates for voting rights, among other issues. However, the company, an energy utility that transports natural gas and burns gas, oil, and coal to create electricity, was listed as a participant in the RSLC’s “election integrity” event. Dominion has given the RSLC $195,000 in 2021, the majority of which came on June 1, after multiple news outlets had reported on the RSLC’s voter suppression agenda.

Dominion Energy spokesperson Rayhan Daudani did not answer CMD’s questions about the RSLC and voter suppression.

“We encourage robust participation in the political process, especially encouraging our employees and all eligible citizens to vote,” wrote Daudani in an email. “Dominion Energy’s political contributions are paid by shareholders, not one penny comes from customer bills. Our contributions are bipartisan and transparent on behalf of our 17,000 workers.”

Additional companies that signed the Black Economic Alliance statement have given money to the RSLC this year.

In addition to signing the statement, General Motors has specifically opposed restrictive voting bills in Michigan, where it is based.

“We are calling on state lawmakers across the nation to work together in a bipartisan way to ensure that any changes to voting laws preserve and enhance the most precious element of democracy—the right to vote in a fair, free, and equitable manner. Anything short of that is unacceptable,” wrote CEO Mary Barra on April 6.

But on that very day, the RSLC was meeting with other corporate donors behind closed doors to promote voting restrictions under the guise of “election integrity.” Just one week earlier, GM had donated $125,000 to the RSLC.

In a statement to Popular Information, GM said that it renewed its memberships in the RSLC and the ​​Democratic Legislative Campaign Committee in late 2020. “Our support for these organizations is evaluated on an annual basis and does not represent an endorsement of every issue the organization or its individual members may support,” the company said.

Despite claiming to pause its political donations after the deadly Jan. 6 insurrection, Facebook gave the RSLC $50,000 in late February, as Popular Information first reported. The social media giant claimed that the contribution was “standard practice” and represented “membership dues” to the Republican Lieutenant Governors Association (RLGA), which is run by the RSLC. The latter group was free to use that money how it wishes, according to Popular Information.

Software company VMWare gave $25,000 to the RSLC on March 30. Dell Technologies, which also signed the voting rights statement, owns VMWare but is spinning off the company later this year. Dell CEO Michael Dell, who personally signed the statement, will own 41% of VMWare after the spinoff. VMWare works with IBM, which signed the statement as well.

Other companies donated to the RLSC in 2020 to attend the April 6 voter suppression workshop. For example, consulting giant Deloitte, which signed the voting rights statement and has its own statement in support of voting rights on its website, was listed as an attendee of the April 6 event and gave $15,000 to the RSLC in 2020 to qualify for the meeting, according to Documented/Popular Information.

Google responded to CMD’s questions but did not offer a comment. Biogen, Deloitte, and VMWare did not respond to requests for comment.

International law firm Holland & Knight gave $10,000 to the RSLC on March 9. But just over one month later, Managing Partner Stephen Sonberg signed a statement along with many other lawyers that denounced voting laws that restrict voting and “disenfranchise underrepresented groups.”

“We, the undersigned law firm managing partners and corporate general counsel, denounce all efforts to restrict the constitutional right of every eligible American to vote and to participate in our democracy,” reads the statement.

Like Dominion, Holland & Knight donated to the Lawyers’ Committee for Civil Rights Under Law, giving $100,000 in September 2020 and issuing a press release that heralded the group’s “incredible” civil rights work on behalf of minority groups. Some of the voter suppression efforts backed by the RSLC and the lawmakers it supports would disproportionately affect voters of color, as have past GOP attempts to exclude voters who tend to vote for liberals.

Walker IV gave the maximum allowed amount of $5,000 to the McGuireWoods PAC on January 13, one week after the Capitol insurrection that some right-wing state lawmakers attended.

Company PACs use donations from their employees, typically the top executives, to fund political committees, as opposed to money from their corporate treasuries.

This year, the McGuireWoods PAC has donated to numerous Texas state lawmakers, as the company has an office in Dallas. Among the recipients are Republicans who wrote Senate Bill 1 and House Bill 3, two omnibus bills that restrict voting in several ways, including an expansion of poll watchers’ powers. For example, in June it gave to the campaigns of most S.B. 1 sponsors: Sens. Brian Birdwell ($500), Dawn Buckingham ($500), Brandon Creighton ($500), Joan Huffman ($500), Lois Kolkorst ($250), Robert Nichols ($500), Angela Paxton ($500), Charles Schwertner ($500), and Drew Springer ($500), for a total of $4,250. Paxton is the wife of Texas Attorney General Ken Paxton, who led a failed effort to overturn the 2020 election results and spoke at a Jan. 6 rally that preceded the insurrection.

The PAC also donated to Texas Lieutenant Gov. Dan Patrick ($500) and Gov. Greg Abbott ($2,500), two far-right officials who support the voting restrictions and have pushed the state “hard to the right.”

Holland & Knight and McGuireWoods did not immediately respond to CMD’s requests for comment.