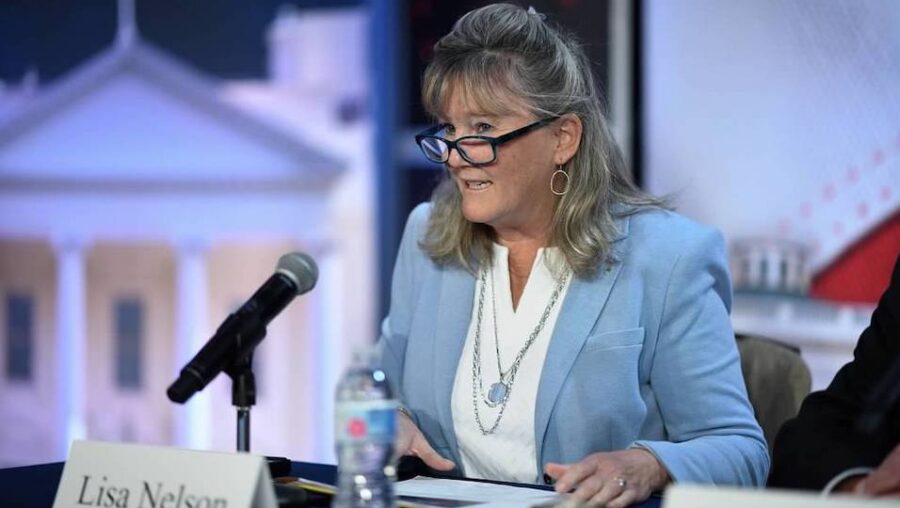 When a broad coalition of more than 300 civil rights and democracy reform groups called for corporations to ditch the American Legislative Exchange Council (ALEC) in June because of its voter suppression efforts, ALEC’s response was swift and righteous.

And, in a letter obtained and published by CMD, Nelson told her members that, “The assertions included in the coalition letter are categorically false…. ALEC does not create or promote policy models on election reform/security.”

Video obtained by CMD this week caught Nelson telling a very different story to her right-wing audience at a May meeting of the secretive Council for National Policy at the Ritz-Carlton in Naples, Florida.

When asked what ALEC was doing on election issues, Nelson replied that, “We’re holding a two-day seminar at our meeting in July on what policies need to and should be developed so that states can address that.”

“We’ve been targeting our efforts on those states that have had issues: Pennsylvania, Michigan, Arizona, Florida to a certain degree,” Nelson said. “And it’s not like we aren’t working in the other states. Idaho passed election reform. I know other states have been looking at tightening up. Everything that they’re doing is with what Bridgett Wagner said, ‘making it easier to vote, and harder to cheat.’ So, we’ll be continuing to work on that.”

Nelson’s dodge is that, due to the blowback and corporate exodus it experienced from its earlier work on Voter ID and gun laws, ALEC is not posting its own model bills on voting restrictions – they have essentially outsourced that to a dark money group called the Honest Elections Project that operates in close conjunction with ALEC.

“We don’t have model policy,” Nelson told her CNP audience. “We will be developing that at the Honest Elections Project [seminar], through them.”

ALEC, a pay-to-play operation where legislators and corporate lobbyists meet behind closed doors to adopt and promote model legislation on a broad range of public policy issues, has in fact played a major role in this year’s voter suppression drive by GOP-controlled legislatures.

In April, CMD identified more than 100 Republican politicians connected to ALEC in just six battleground states who are lead sponsors or cosponsors of those voter suppression bills. ALEC is also pushing to loosen restrictions on poll watching activities that historically have been used to intimidate Black voters, and its national board treasurer is leading the controversial Cyber Ninjas “audit” circus by pro-Trump conspiracy theorists in Maricopa County, Arizona.

The watchdog group Documented also obtained a copy of Heritage Action for America’s $24 million voter suppression plan in April, which detailed a two-year campaign to be conducted in coordination with ALEC and the State Policy Network.

ALEC, which closely aligned itself with Trump and the GOP, is heavily invested in getting voter suppression bills passed in order to give Republicans an edge in coming elections.

“Remember, it is only about 10 or 11 states that need to be focused very heavily on what their election reform efforts look like with respect to the competition and outcome,” Nelson said, making ALEC’s partisan motives perfectly clear.

At that event, ALEC legislators participated in “roundtable discussions on what states have done to improve election integrity,” the Republicans’ buzz phrase for making it harder to vote, according to an email invitation acquired by CMD.

Further, three Secretaries of State were invited “to discuss the implementation of new election legislation,” the invite promoted.

The Honest Elections Project was formed as a project of Leonard Leo‘s The 85 Fund. Leo, also referred to as Trump’s “judge whisperer,” worked quietly behind the scenes to organize a right-wing takeover of the U.S. Supreme Court, and has more recently turned his attention to funding voter suppression efforts.