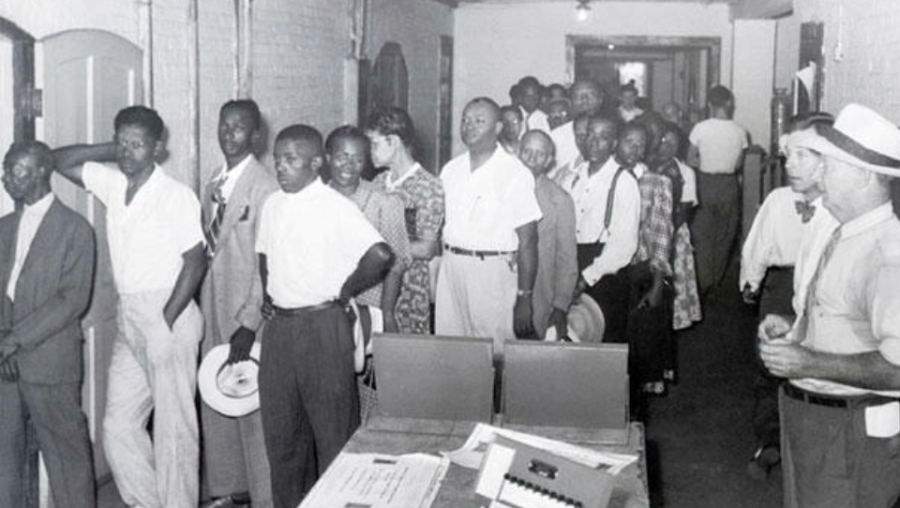 Republican state legislators, including dozens tied to the corporate-funded American Legislative Exchange Council (ALEC), are pushing to loosen restrictions on poll watching, which has historically been aimed at preventing Black Americans from voting.

These poll watching initiatives are part of a broader movement to suppress voting in the wake of a presidential election and violent insurrection that didn’t achieve what these lawmakers wanted.

The Republican Party’s use of poll watching as an intimidation tactic has a particularly notorious history, and was essentially prohibited in 1982 when a federal judge brokered a consent decree between the Republican and Democratic national committees barring the GOP from engaging in “ballot security” and voter intimidation efforts without prior judicial approval. Before then, the RNC had hired armed, off-duty police officers to patrol majority-minority precincts wearing “National Ballot Security Task Force” armbands.

Although the RNC was alleged to have violated the decree several times over the years, it remained in place until early 2018, when the courts allowed it to expire. Donald Trump threatened to send out masses of poll watchers to minority precincts in 2020, although relatively few actually appeared.

As of April 15, state lawmakers have introduced at least 40 bills in 20 states to expand the powers of poll watchers, according to the Brennan Center for Justice. At least 80 ALEC-tied lawmakers are co-sponsors of 21 of those bills in nine states, the Center for Media and Democracy has found.

The Center for Media and Democracy previously reported that over 100 ALEC-tied politicians are leading voter suppression efforts in battleground states.

While hundreds of top companies have earned praise for publicly opposing voter suppression, corporations have long bankrolled state lawmakers who back those measures—and now the extensive involvement of politicians affiliated with ALEC shows that corporate America is still actively aiding suppression efforts.

For a while, ALEC was ostensibly out of the voter-suppression business. In 2012, the group disbanded its controversial Public Safety and Elections Task Force after fierce backlash from the public and corporations—40 of which ended their memberships—over its role in promoting voter ID and “stand-your-ground” laws.

But over the last two years, ALEC quietly got right back in the game.

One legislative member of the working group, Texas state Rep. Phil King, is a co-sponsor of two 2021 poll watcher bills.

“The issues we plan to cover include but are not limited to; election law and ballot integrity; campaign finance; electoral college; redistricting and citizen vote questions,” ALEC CEO Lisa Nelson wrote in an email inviting select legislators to join the secret group.

The Heritage Foundation’s Hans von Spakovsky, a leading purveyor of the voter-fraud myth and “mastermind” of the Right’s sweeping voter suppression drive this year, took part in a private panel of the ALEC working group about redistricting in mid-2019, as Documented reported, and again at another event later that year.

At least one company that publicly denounced Republican voter suppression appears to still be a paying ALEC member.

McGuireWoods LLP signed an April statement from a number of large law firms denouncing “all efforts” to restrict voting. But its subsidiary, McGuireWoods Consulting, has been an active private sector member of ALEC.

McGuireWoods and the Blue Cross Blue Shield Association did not return requests for comment.

After publication of this article, Dominion Energy told the Center for Media and Democracy that it is no longer a member of ALEC and has “not paid dues in many years.” According to the company’s current lobbying and political contributions policy, “there are circumstances when misalignment with our principles may be material enough that ending membership or participation is necessary.” Dominion says it left ALEC because of such a misalignment.

Dominion Energy had previously been a member of ALEC’s Energy, Environment and Agriculture task force. Last year, a coalition of good-government groups wrote to Dominion, urging the company to sever ties with ALEC.

In February, Dominion donated $1 million to the Lawyers Committee for Civil Rights to be used to “protect ballot access” and “end systemic racism.”

"We should be moved to action now, with the same sense of urgency that compelled the civil rights lawyers then.

Our hope is this contribution makes a lasting impact in the fight against systemic racism.”

Dominion also participated in a private April 6 meeting of the Republican State Leadership Committee’s “election integrity” working group. A presentation deck obtained by Documented and Popular Information shows that the group discussed numerous voter suppression proposals, including one that would reward citizens for reporting evidence of voter fraud.

Operating much more publicly, but alongside ALEC, is the Heritage Foundation’s political arm, Heritage Action for America. Heritage and ALEC share the same founder, Paul Weyrich, and many of the same institutional funders.

Heritage has boasted about drafting Georgia’s new voter suppression law and that voting bills passed in Arizona and Iowa contained many of its recommended items. Heritage plans to spend $24 million to write and move bills to restrict voter access in eight states by working closely with ALEC and its allied network of right-wing “think tanks,” the State Policy Network.

“In some cases, we actually draft [the bills] for them,” said Anderson, “or we have a sentinel on our behalf give them the model legislation so it has that grassroots, from-the-bottom-up type of vibe.”

After Iowa Democrats accused Heritage of violating lobbying rules and Republicans denied they worked with Heritage directly, Heritage issued a new statement saying its influence there came through a “grassroots network” that “helped shape legislation that is now law.”

The History of Poll Watching

“Poll watching as a general premise is not a bad idea,” Ben Jealous, president of the progressive advocacy organization People For the American Way, told the Center for Media and Democracy. “But the reality is that ‘poll watching’ orchestrated by the right has translated to ‘voter intimidation’ of Black voters throughout the decades. Poll watchers deployed to scare away voters of color have often been armed and violent, dating back to the 19th century.”

The new poll-watching legislation includes omnibus bills in Georgia (SB 2020), which the governor signed into law, and Texas (SB 7), which both chambers are considering in a conference committee. Texas has seen 15 bills that enable poll watchers this term, more than in any other state. ALEC’s Texas State Chair Tan Parker is a co-sponsor of HB 6, another omnibus bill that includes poll watcher expansion, and its lead author is ALEC politician Briscoe Cain, who is chairman of the House Elections Committee. The bill passed the House and is currently in a Senate committee.

“It comes as no surprise that we see ALEC lurking behind these poll watching bills, just as it has been shown to be part of the cross-country push for voter suppression laws,” said Jealous.

“In order to advance their deregulatory agenda—which serves the interests of corporations—ALEC needs legislatures willing to pass it,” he continued.

“When Black and brown people vote in high numbers—as they did in the Georgia Senate runoffs—the seating of a hard-right, deregulatory legislature becomes less likely. Black people know how deregulation has worked out for them: It has poisoned Black neighborhoods and shaken down Black people with shady financial products.”

Click here for a list of all 40 poll watcher bills, their sponsors, and their status. Below is a map of these bills sponsored by ALEC lawmakers; click on a state to learn about its bills.

The 2020 Trump campaign and the Republican National Committee sought to recruit 50,000 poll watchers to prevent imagined voter fraud. Trump called for an “army” of poll watchers, which Jealous said was “a militarized call to action clearly meant to threaten and intimidate voters.”

“We’ll never know how many people simply stayed away from the polls because of the threats emanating from the Trump campaign,” said Jealous.

Right-wing “voter integrity” group True the Vote, which was accused of using poll watchers to intimidate minority voters in 2010, announced plans to sign up 10,000 poll watchers. Founder Catherine Engelbrecht floated the idea of using veterans, even retired Navy Seals, to police the polls at a meeting of the right-wing Council for National Policy last year. True the Vote offers free poll watcher training on its website.

In the end, the voter challenges were not ubiquitous, although hordes of far-right actors, including at least one member of Congress, flocked to vote counting centers in Arizona, Michigan, and Nevada. GOP Rep. Paul Gosar in Arizona and others spread conspiracy theories and alleged that vote counters were committing fraud. An angry mob tried to storm the Maricopa County department of elections.

“I think what we’re seeing is the most serious attempt across the country to restrict the rights of certain Americans to vote since the days of Jim Crow,” said Rep. Colin Allred (D-Texas), a member of the Congressional Black Caucus.

This article has been updated to include Dominion’s comment that it is no longer an ALEC member.