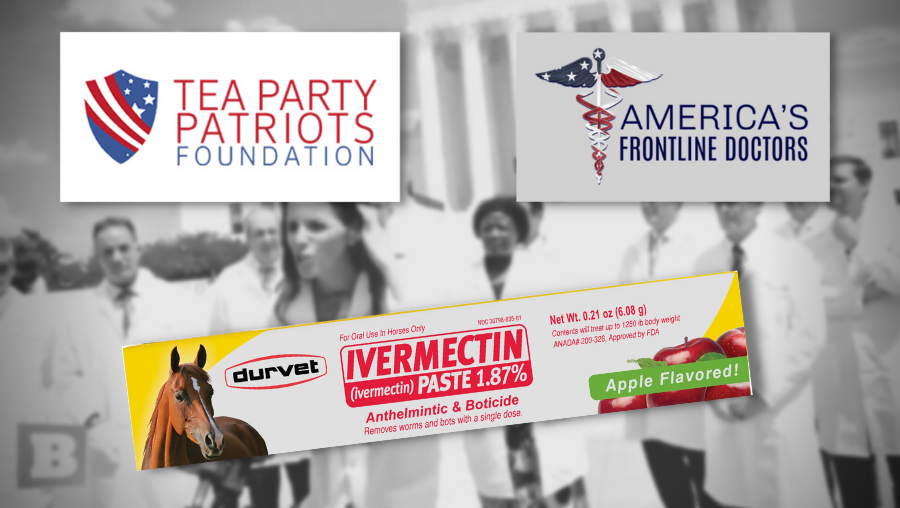 When the political arm of the far-right Council for National Policy met in May 2020, officials discussed doing damage control for then-President Donald Trump, whose reckless administration caused unnecessary deaths as Covid-19 swept the nation and devastated the economy.

As the Center for Media and Democracy first exposed, members of the sister group CNP Action shared plans to promote a group of pro-Trump doctors who would urge economies to reopen before meeting safety benchmarks proposed by the federal Centers for Disease Control and Prevention to slow the spread of the coronavirus.

The primary doctor to emerge from these plans was Simone Gold, an emergency medical specialist who leads the doctor group, America’s Frontline Doctors (AFLD), which has consistently spread misinformation about Covid, opposed vaccinations and mask use, and hawked unapproved Covid-19 drugs. Gold was arrested and charged with violent entry and disorderly conduct after she entered the U.S. Capitol during the deadly Jan. 6 insurrection.

In May, Gold’s group asked a federal court in Alabama to block the emergency use authorization for the Covid vaccine in 12-to 15-year-olds, arguing that the vaccines are potentially more harmful than Covid-19, which has killed over 4.5 million people worldwide. Top GOP attorney Jim Bopp is AFLD’s director of litigation.

Another member, pediatrician and minister Stella Immanuel, has made outrageous statements, claiming that DNA from space aliens is used in medicine and that demons cause ailments such as fibroid tumors and cysts.

The Center for Media and Democracy (CMD) obtained AFLD’s federal tax-exemption application and other related documents, which reveal that the Tea Party Patriots Foundation was the fiscal sponsor of the group behind AFLD, meaning that it accepts tax-deductible donations on behalf of the doctors’ group and helps it with accounting. A fiscal sponsor allows an organization that has not received its 501(c)(3) charitable tax status to accept tax-deductible donations.

According to the documents, the Arizona-based nonprofit behind AFLD, formerly known as the Free Speech Foundation and now called the Common Sense Foundation, anticipated a 2020 revenue of $400,000. Starting in 2021, the group forecast a budget of over $900,000, including $231,000 in compensation for officers and $50,000 for lobbying.

The application includes information about “membership.”

Aside from Gold, the foundation’s board consists of Trump fan Amy Orkin Landau and Claudia Kreitenberg, who “manages client relationships” for InDefend, a company run by Gold that makes software that helps medical professionals respond to audits.

In May, the nonprofit received its charitable tax status from the IRS. It is unclear if the Tea Party Patriots Foundation is still a donation conduit for the Common Sense Foundation.

The Tea Party Patriots is an extremist group founded in 2009 that helped organize the rally and march to the Capitol just before the violent insurrection. The organization has three arms: the 501(c)(3) foundation, the “social welfare” nonprofit Tea Party Patriots Action, and the Tea Party Patriots Citizens Fund, a super PAC. In the 2020 election cycle, the super PAC spent over $1 million backing Trump.

The biggest donor to the super PAC that cycle by far was Richard Uihlein, the billionaire owner of shipping supply company Uline and a Tea Party financier since 2016. He and his wife, Liz, are GOP megadonors, and they were among the biggest contributors to groups that helped elect the members of Congress who voted to overturn the 2020 presidential election results. The biggest donor to the super PAC this year is Gore-Tex heir David Gore, who gave $150,000 and previously co-founded the libertarian Cascade Policy Institute, a member of the State Policy Network, a web of right-wing tax-exempt organizations.

The Tea Party Patriots Foundation did not return CMD’s request for comment on AFLD’s money-making scheme.

Grifting Off of Fake Covid Cures

In late July 2020, the Tea Party Patriots hosted and funded an event with members of AFLD in front of the Capitol, where the doctors criticized business and school closings, social distancing, and mask wearing and claimed that malaria drug hydroxychloroquine could prevent and cure Covid-19. With a Trump retweet, a video of the event went viral, and right-wing media ran with it. The Food and Drug Administration has cautioned against using hydroxychloroquine to treat Covid-19.

Many members of AFLD have more recently added a deworming drug, ivermectin, into their arsenal. These doctors, right-wing politicians, and numerous media pundits have promoted the drug, which requires a prescription for use in humans, as a Covid-19 treatment. Another version meant for cows and horses is available at animal supply stores.

Unable to access the human version of ivermectin, desperate anti-vaxxers have snapped up supplies of the livestock version, despite warnings by its manufacturer and numerous U.S. and international government agencies against humans using the drug. Feed stores in numerous states have seen huge spikes in ivermectin sales, and ivermectin-related poison control calls in these states have dramatically increased.

One person who self-administered the drug was hospitalized in Mississippi. Others who acted on this misinformation may be experiencing gastrointestinal issues, bad medication interactions, and even neurological symptoms, but AFLD is doing pretty well.

As Time and NBC News reported, AFLD set up a website advertising medical consultations for $90. The site asks patients which treatment they prefer: “Ivermectin,” “Hydroxychloroquine” or “Not sure.”

Under the federal COVID-19 Consumer Protection Act from earlier this year, it is illegal to advertise that a product can prevent, treat, or cure COVID-19 “unless you possess competent and reliable scientific evidence substantiating that the claims are true.” The FDA says that no such study exists for ivermectin.

While the site claims that the $90 payment is “pending” until the consultation is complete, customers identified by Time said they’d been charged for consultations that didn’t happen. Hundreds more said that after paying the fee, AFLD didn’t deliver the desired prescription, and others said that the digital pharmacies that AFLD connected them to quoted very high prices of up to $700 for ivermectin, which is not a costly drug.

“They’re the 21st century, digital version of snake-oil salesmen,” Irwin Redlener, a physician who directs the National Center for Disaster Preparedness at Columbia University, told Time. “And in the case of ivermectin, it’s extremely dangerous.”

Gold is on the “National Leadership Council” of the Save Our Country coalition, a collection of far-right individuals associated with the Council for National Policy, the Heritage Foundation, FreedomWorks, and the Tea Party Patriots, among other groups. Save Our Country was active last year when governors shut down their states’ economies because of Covid-19.

The Council for National Policy, which dreamed up America’s Frontline Doctors, is a coalition that author Anne Nelson describes as bringing together “the manpower and media of the Christian right with the finances of Western plutocrats and the strategy of right-wing Republican political operatives.”

Gold has also spewed misinformation alongside Beth Martin at Freedom Rallies, on Tucker Carlson’s Fox News show, at a Turning Point USA conference, and on the “ReAwaken America Tour.” Gold and AFLD have more recently been speaking at anti-vaccine events in Los Angeles and other cities.