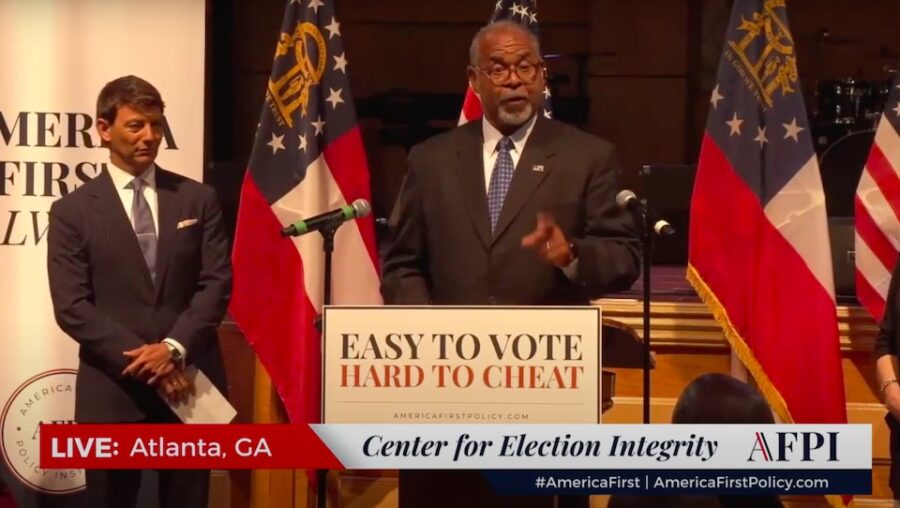 The America First Policy Institute (AFPI), a nonprofit spin-off of the Trump administration established in April, launched a new “Center for Election Integrity” on August 19 at the Metro City Church in Atlanta, Georgia.

Materials obtained by the Center for Media and Democracy (CMD) detail a sophisticated, well-funded effort by the newly founded nonprofit to engage state-level allies and coordinate with national right-wing groups working on elections to advance voter suppression measures embraced by the far right.

The new Center’s priorities echo many of the far Right’s for suppressing the vote, including “to amplify the importance of voter identification, require ballots to be returned by election day, stop the practice of ballot harvesting, ensure voter rolls are consistently cleaned and kept up to date, prohibit the privatization of elections, and litigate cases of voter fraud,” according to a press release.

The church appears to have been chosen strategically, as it is a Black venue and has been used by the Christian Right and Republicans in the past. During the U.S. Senate runoff elections, the PAC of the anti-LGBTQ hate group the Family Research Council held a “Georgia Pastors Briefing” at the church, where then Senate candidate Rev. Raphael Warnock (D) was attacked for his support of a woman’s right to choose, and U.S. Senator Kelly Loeffler (R) “appeared in a special video message.”

Hogan Gidley, director of the center and former deputy press secretary in the Trump administration, told supporters on a call following the event that, “we already have two people in every state at least, who are kinda heading some of our efforts and starting to take audits in different states,” materials obtained by CMD detail.

Gidley continued, “What we have begun to do and we’re getting closer to kinda releasing some more data and information around this is to develop around 15 to 25 to 30 things a bill needs.”

Some of AFPI’s recommendations for state level bills are included in its overview document, while others appear in papers on voter rolls, mail-in ballots, and voter ID.

Gidley also announced two of four regional directors the group has hired to coordinate voter suppression efforts in the states: Jordan Kittleson for the western region and Caroline Wiles for the southern region.

Kittleson is the former national field director for the Club for Growth, and Wiles served a short stint at the Trump White House as deputy assistant to the president and director of scheduling until she was forced to resign after failing an FBI background check.

The new center is chaired by Ken Blackwell, former Ohio Secretary of State and a member of Trump’s failed voter fraud panel, the Presidential Advisory Commission on Election Integrity. Blackwell is well-known in Ohio for negligently posting the Social Security numbers of 6.9 million voters in two separate incidents.

Blackwell is deeply connected a number of other organizations and operatives who are leading the right-wing voter suppression agenda.

He currently also chairs CNP Action, the political arm of the secretive Christian Right group Council for National Policy. The Council is deeply tied to the Trump administration, #StoptheSteal, and the violent insurrection at the Capitol on January 6, CMD has reported.

In May, Blackwell facilitated an “Action Session” at the group’s 40th Anniversary meeting on how to combat the national voting rights effort with election-objector U.S. Rep. Byron Donalds (R-FL) and GOP lawyer Cleta Mitchell, who has promoted Trump’s Big Lie of voter fraud in the 2020 election and advised him on his infamous call pressuring Georgia’s secretary of state to find more Trump votes.

Blackwell and Mitchell also serve together on the board of the Public Interest Legal Foundation (PILF), a “public interest law firm” that fights to purge voter rolls and spreads misinformation around voter fraud, much of which contributed to the “Big Lie.”

“Action Steps” distributed from that panel directed attendees to call on state and federal lawmakers to challenge the election results and appoint alternate slates of Trump electors to the Electoral College.

Rollins served as Trump’s director of the Domestic Policy Council, chief strategist, and director of the Office of American Innovation. Before joining the MAGA White House, Rollins led the Texas Public Policy Foundation, which has its own voter suppression project.

McMahon was administrator of the Small Business Administration in Trump’s cabinet before she left to chair the pro-Trump super PAC America First Action.

King, the niece of Dr. Martin Luther King, is a right-wing activist and member of the Council for National Policy.

AFPI has grown rapidly under the leadership of Rollins and McMahon. According to McMahon’s comments reviewed by CMD, AFPI has 21 centers with 70 full-time and part-time employees on staff, many of whom are tied to Trump and the Republican party.

Prominent MAGA leaders with roles at AFPI include Chad Wolf, who served as Trump’s Homeland Security acting secretary until his appointment was ruled unlawful, as chairman of the Center for Homeland Security and Immigration, and Rick Perry, the former governor of Texas who served as Trump’s Energy secretary, as chairman of the Center for Energy Independence.