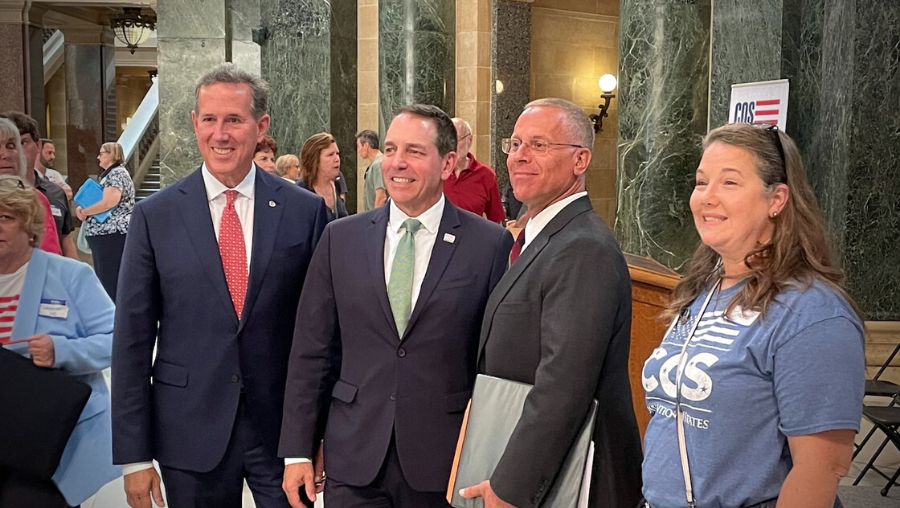 (L to R) Rick Santorum and Mark Meckler want to rewrite the U.S. Constitution to lock in their right-wing ideology. (Credit: David Armiak)

During a private workshop at the American Legislative Exchange Council’s (ALEC) recent policy summit, speakers discussed a right-wing movement to rewrite the U.S. Constitution to “balance the budget,” limit the powers of the federal government, and enact term limits on political office holders.

The group leading the “Leftist Plot or Plan to Save America” workshop, Convention of States Action (COSA), has been working for years to enlist states into a plan to hold an constitutional convention, where state delegates hand-picked by politicians can vote to amend the Constitution. Fifteen state legislatures have voted to convene the broad convention it envisions, nine states have passed a convention bill in one chamber, and 18 additional states have active legislation regarding a convention, according to COSA.

Two-thirds of the states, 34, must pass a convention call for it to occur, and amendments adopted at a convention must be approved by three-quarters of state legislatures to become part of the Constitution.

In audio obtained by the Center for Media and Democracy (CMD), featured speaker Rick Santorum, a former GOP senator from Pennsylvania who joined the Convention of States Project in September as a senior adviser, expressed optimism about the movement and made an important admission to his private audience: their path to victory relies on gerrymandering.

We have a hard time winning presidential elections, as you know, in Pennsylvania, yet we dominate the state legislature and Congress. Why? …All [of Democrats’] votes are concentrated in a very small group of people [in urban areas], and it’s hard to draw legislative districts that they can win because most of their legislative districts are 90 plus percent one party.

Rural voters, even though there are fewer of them…actually have an outsize granted power under this process. And we have the opportunity as a result of that to have a supermajority, even though…we may not even be in an absolute majority when it comes to the people who agree with us, but because of the way the concentration of votes has changed in this country, we can actually accomplish things.

In other words, Republicans have been successful at drawing district lines to dilute Democratic votes by packing them into a small number of districts, thereby giving themselves an outsized majority in state legislatures, and COSA wants to use that advantage to lock their minority views into the Constitution.

The very first bill that Democrats in Congress introduced this year was H.R. 1, a sweeping elections and voting rights framework that would end partisan gerrymandering. But after 11 months of Joe Biden’s presidency, the Senate still has not passed it. Meanwhile, Republican lawmakers have gone to work drawing new state and federal voting districts to give themselves impenetrable majorities for the next decade.

Republican state legislators have drawn district lines this year that, if voters vote the same way they did in 2020, would flip the U.S. House to GOP control.

Due to extreme partisan and racial gerrymanders after the 2010 census, Republican state lawmakers went into this year’s redistricting with a strong advantage over Democrats, and now they’re set to expand that advantage, making COSA’s desired supermajority more of a possibility.

Knowing their views aren’t popular with a majority of Americans, conservative constitutional convention advocates hope to use archaic, anti-democratic standards that empower rural and more traditionally conservative voters to effectively gerrymander the Constitution and cement their minority rule for decades to come.

COSA advocates envision a constitutional convention that would propose sweeping amendments to reign in federal spending with a balanced budget amendment, enact term limits on politicians, and limit the power and jurisdiction of the federal government. The group wants the term limits applied to elected federal officials, judges, and other federal civil servants, which they consider part of the “Deep State.”

“The Deep State’s real. I mean, it’s just real,” said Santorum. “You all know this from your own legislature, your own state governments.”

ALEC Board of Scholars member Rob Natelson claimed at the ALEC panel that a “runaway” convention, where delegates propose and vote on unrestricted amendments regarding any issue, won’t occur, but nothing in the Constitution limits the scope of a convention once it has been convened.

Santorum likes the convention approach, where delegates chosen by state legislatures or Congress will represent their states, and disparaged direct democracy.

“California has proven that…pure democracy is not not the greatest idea,” Santorum said.

COSA Says No to “Leftist” Groups

As CMD previously reported, several liberal organizations joined right-wing groups like the Reason Foundation in a half-day session called “Academy of States 2.0” to discuss strategies for convening a constitutional convention. But COSA would not participate in the event because of the presence of those “leftists,”, including Wolf PAC and American Promise, because they want to overturn the Supreme Court’s Citizens United ruling, which allowed unlimited corporate spending on elections.

Mark Meckler, a Tea Party organizer and president of COSA, said that the ruling, which relied on the idea that corporations should be treated as people, was “one of the greatest free-speech decisions in American history.”

“Citizens United opened the floodgates to free speech in the United States of America, and I think it is extraordinarily dangerous, unproductive, for us, for people who consider themselves conservatives, to invite that effort into our tent,” Meckler said.

Meckler also had some harsh words for the hundreds of pro-democracy groups, including the Center for Media and Democracy, that signed a 2018 statement (updated in 2019) condemning a constitutional convention, calling the prospect “a threat to every American’s constitutional rights and civil liberties.”

Funding a Rewrite of the Constitution

The parent organization of COSA, Citizens for Self-Governance, gets most of its funding from anonymous donations via donor-advised fund sponsors. From 2012-18, the group received nearly $7.6 million from the Vanguard Charitable Endowment Program, a fund that passes along its clients’ charitable donations to the nonprofits of their choice. Donors also include DonorsTrust and Donors Capital Fund—right-wing donor-advised fund sponsors used by GOP megadonors such as the Koch and Mercer families—the Armrod Charitable Foundation, Judicial Education Project (now known as The 85 Fund), the Mercer Family Foundation, and the Thomas W. Smith Foundation.

When former state Rep. Chris Taylor (D-Madison) asked Meckler to reveal his funders at a public hearing on Wisconsin’s Convention of States resolution in 2019, he refused to do so.

Citizens for Self-Governance has direct ties to the political network of billionaire oil magnate Charles Koch. Eric O’Keefe, the group’s co-founder and board chair, has deep connections to the Kochs, and another board member has been Tim Dunn, vice chairman of the Koch-funded Texas Public Policy Foundation, which supports an Article V convention.

Listen to the full audio from the workshop:

Read the full comment about minority rule from Santorum:

I look at my state of Pennsylvania, for example. We control the state House. We control the state Senate and have for a long, long time, and yet there are over a million more registered Democrats than Republicans in Pennsylvania. We have a hard time winning presidential elections, as you know, in Pennsylvania, yet we dominate the state legislature and Congress. Why? …All [of Democrats’] votes are concentrated in a very small group of people, and it’s hard to draw legislative districts that they can win because most of their legislative districts are 90 plus percent one party…So that’s why we have an opportunity in many states because that trend is increasing, I would argue, on their side because they’re such as a special-interest, divisive party right now. They’re appealing to just a core group. I look at this as an opportunity given the fact that most states are not populated by heavily, densely metropolises like we have in Philadelphia and Pittsburgh or New York has in New York, most states don’t have those huge big cities, and so most states are going to be controlled by Republicans. And most of that means rural voters, even though there are fewer of them, because of, just like the Electoral College, they actually have an outsize, in a process like this, they actually have an outsize granted power under this process, so this is why this, in a country that’s deeply divided, you can say, ‘How can we, how can we achieve what Rob [Natelson] said we can achieve?’ which is approaching a supermajority in the states. Why? Because their population is concentrated and ours isn’t. And we have the opportunity as a result of that to have a supermajority, even though the country may not, we may not even be in an absolute majority when it comes to the people who agree with us, but because of the way the concentration of votes has changed in this country, we can actually accomplish things.