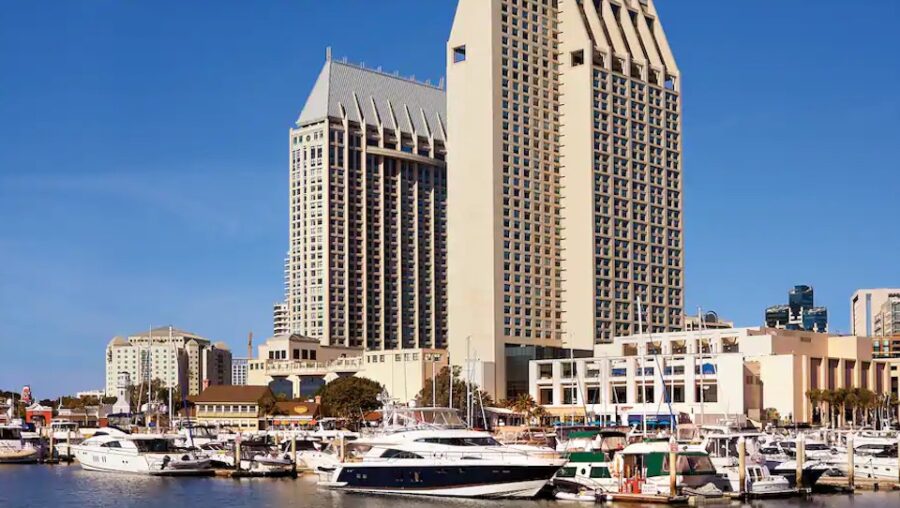 Although the American Legislative Exchange Council (ALEC) claims not to work on elections, it had elections – and the U.S. Constitution – squarely in its crosshairs when it launched its annual States and Nation Policy Summit at a four-star hotel in San Diego this morning, according to documents obtained by the Center for Media and Democracy (CMD).

Jet-lagged legislators who wanted to get up to speed on ALEC‘s latest plans to limit voting, rig election districts to favor Republicans, and conduct fake 2020 election “audits” needed to be up and caffeinated by 8 a.m. Pacific time to attend a secret “Process Working Group” meeting and hear from a who’s who of GOP and pro-Trump election strategists.

Neither the Process Working Group nor a simultaneous “Academy” on convening a constitutional convention to consider numerous right-wing amendments were posted in any of ALEC’s publicly available materials on its policy summit.

All Hands on Deck at Secret Elections Meeting

The president of ALEC’s advocacy arm, ALEC Action, took the stage with insurrectionist attorney Cleta Mitchell to introduce the elections session. Mitchell lost her prestigious law firm position after joining Trump on a phone call pressuring Georgia’s secretary of state to “find” 11,000 more Trump votes. She now works alongside Mark Meadows, Trump’s former chief of staff facing scrutiny from the House committee investigating the Jan. 6 attack on the Capitol, at the Conservative Partnership Institute, heading up its “Election Integrity Network.”

Many of the speakers in the working group meeting previously presented at ALEC’s controversial elections “Academy” before its annual meeting in July, first exposed by CMD, including J. Christian Adams, president of the Public Interest Legal Foundation who recently wangled the appointment of Mitchell as an advisor to the U.S. Election Assistance Commission; Donald Palmer,  a Republican commissioner on the U.S. Election Assistance Commission; Jason Snead, executive director of the dark money-funded Honest Elections Project; and Hans von Spakovsky, senior legal fellow and manager of the Heritage Foundation’s election suppression campaign this year.

Arizona Senate President Karen Fann (R), ALEC’s incoming national chair and ringleader of Arizona’s controversial 2020 election “audit” circus presented on “The Arizona Audit Story,” while Adam Kincaid, who heads up partisan gerrymandering efforts at Fair Lines America and the National Republican Redistricting Trust, spoke on the current redistricting landscape. Republicans are aggressively using their political advantage in the states to rig highly skewed maps that will give them a majority in the U.S. House and lock in control over many state legislatures.

While ALEC has tried to hide its efforts to influence elections and election policy, video from a May Council for National Policy meeting obtained by CMD shows ALEC CEO Lisa Nelson speaking about ALEC’s work on voting and revealing its plans to outsource model policy on the controversial topic to avert attention. “We don’t have model policy. We will be developing that at the Honest Elections Project [Academy], through them,” Nelson said.

At the same time, ALEC held a half-day “Academy of States 2.0” this morning to work with its member lawmakers on strategies for convening a constitutional convention to propose a whole host of revisions to the U.S. Constitution. ALEC held a similar “interactive academy” after the annual meeting in July.

Participating in the academy was Wolf PAC, a left-wing group pushing for a convention to move a constitutional amendment that would overturn the U.S. Supreme Court’s Citizens United decision and allow the states and Congress to limit campaign spending.

Attendees at the 2.0 academy also heard presentations on a number of amendments that would restrict federal spending and debt limits and term limits on Congress, as well as a “No Runaway Article V Conventions Act.”

The “No Runaway Article V Conventions Act” would require delegates sent by the states to a constitutional convention to take an oath swearing to “vote only as instructed” by their state legislature and to not vote for any other amendments under threat of civil or criminal penalties, according to a draft viewed by CMD.

The model bill is part of an effort to push back on the belief by well-respected constitutional scholars that nothing in the Constitution limits the scope of an Article V convention once it is called. As Georgetown University Law Professor David Super told the Associated Press, “Once you have the convention, it is subject to nobody’s control. It makes its own agenda. It makes its own voting rules that decides how long it lasts and how far it goes.”

The proposed bill, and another measure seeking a constitutional convention to limit federal spending and powers, will also be considered at a joint meeting of ALEC’s task forces on “Homeland Security” and “Federalism and International Relations.” The latter measure was first posted by ALEC in July and discussed at its annual meeting, but it has since taken the language off its website.

While Convention of States Action did not participate in the academy, its leader Mark Meckler and senior advisor Rick Santorum are listed as speakers during the policy summit, and they will host a hospitality suite, CMD has learned.

In 2017, infighting among the various groups pushing for a rewrite of the Constitution led to ALEC’s board chastising them to “behave with civility and professionalism” and “honor their commitments to each other.”

ALEC lawmakers will also have the opportunity to attend a Dec. 2 workshop, called “Leftist Plot or Plan to Save America,” that will teach legislators about the “coordinated disinformation campaign by the liberal establishment” to prevent a constitutional convention and how a convention “may be the only path ahead to keep America both free and united.”

ALEC’s policy summit, the main event, is sponsored this year by Convention of States Action, the Legal Insurrection Foundation, the Bradley Foundation, the Foundation for Government Accountability, American Federation for Children, National Automobile Dealers Association, and Save Our States, CMD has learned.

The Bradley Foundation, provided $3.9 million in funding to ALEC between 2014 and 2019, making it ALEC’s top identifiable donor.

Controversy over the pay-to-play group’s role in promoting climate change denial and voter suppression has resulted in over 115 corporations to quitting ALEC since 2012. Recent ALEC defectors include First Solar, Pfizer, and Dominion Energy.

In the Task Force on Education and Workforce Development at the summit, ALEC lawmakers will hear presentations on, “School Choice Myths: Setting the Record Straight on Education Freedom,” and “Who’s Afraid of School Choice? Examining the Intensity and Validity of Predictions by School Choice Opponents.”

Meeting attendees will also discuss “parental rights” in K-12 education and consider a Fundamental Parental Rights Statute that would recognize a broad “liberty interest” of parents over their children’s education and “control,” and bar any government agency or officer from infringing on that interest.

The Bradley Foundation will host a forum for meeting attendees on “harnessing parental engagement: to push for education reforms, and oppose “school lockdowns, the promotion of divisive curricular, and efforts to demonize and silence parents.”

At its December 2020 summit, ALEC hosted a workshop, “Against Critical Race Theory’s Onslaught” that featured operatives behind the attack on the factual teaching of racism in schools, including Manhattan Institute’s Christopher Rufo, who has been credited with inventing the controversy. Critical race theory is a college-level academic framework that is not taught in public schools.

Stating that “the environment has never been more ripe for long needed reform in education,” the description for the Bradley Forum says that ALEC legislators, “will hear from leaders in this space who can show you how to harness the unprecedented momentum to reform education, from what’s being taught in the classroom, to legislation that can open opportunity for all students.”

The speakers listed for the Bradley Forum include: Garrett Ballengee, senior policy and research analyst at the Cardinal Institute; Jonathan Butcher, education fellow at The Heritage Foundation; Lance Izumi, senior director for education at the Pacific Research Institute; Libby Sobic, director of education policy at the Wisconsin Institute for Law & Liberty; and Jim Copland, director of legal policy at the Manhattan Institute.

ALEC meeting attendees will also have the opportunity to attend a “bootcamp” led by the Legal Insurrection Foundation, where “legislators will receive intensive practical guidance and tips from legal experts on how to formulate and structure legislation supporting free speech and academic freedom” on college campuses and K12 schools.

ALEC has long served as an important vehicle for the fossil fuel industry’s efforts to prevent action on the climate emergency and promote climate denialism. This week’s meeting continues that long tradition.

ALEC legislators and corporate lobbyists on the Energy, Environment, and Agriculture Task Force will consider a Resolution Opposing Securities and Exchange Commission and White House Mandates on Climate-Related Financial Matters that urges states to “use all tools at its disposal,” including “legal challenges,” to fight SEC rules on “climate change disclosure” and, more broadly, President Biden’s “Executive Order on Climate-Related Financial Risk.”

ALEC lawmakers will also debate draft policies that would increase the power of state legislatures and limit the powers of the executive branch.

ALEC’s Targeted Legislative Review Act would create a “Legislative Economic Analysis Unit” that would enable the legislature to do its own regulatory impact analysis and decide what regulations qualify as “major” rules requiring legislative approval. The proposed bill reflects a longstanding industry effort to insert political control over executive branch environmental and public health regulations.

Along similar lines, ALEC’s proposed Accountability in Rule Making Act would require approval from the state’s governor before an agency can publish any new rule.

ALEC lawmakers and lobbyists will also debate An Act to Facilitate the Disclosure of Foreign Grants or Gifts Received by State Agencies. An “International Cultural Agreements” section of that proposed bill would place restraints on public schools, colleges, and universities seeking an agreement or grant from a foreign country if it “promotes an agenda detrimental to the safety or security of the United States or its residents,” or if the gift is “conditioned upon participating in a program or other endeavor to promote the language or culture of concern.”

Other proposed new ALEC policies include: