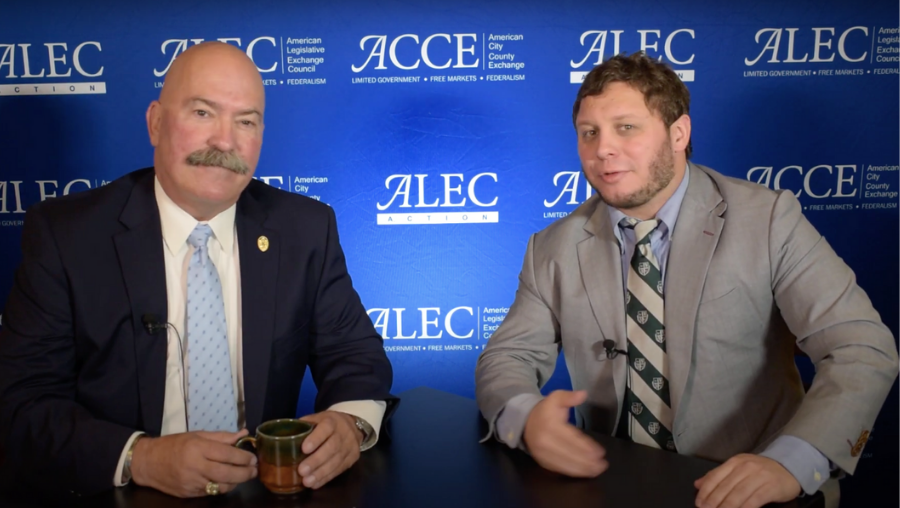 In a July interview with the Salt Lake Tribune preceding its annual meeting, Lisa Nelson, the CEO of the American Legislative Exchange Council (ALEC), claimed that her organization is fully transparent about its finances.

“We fill out the same 990 [tax form] that every other organization does…They’re available on our website.”

Asked if the tax records include “all the funders,” Nelson replied, “That goes through all our funding.”

The tax records do not include the identities of all of ALEC’s funders. In fact, they include no information whatsoever about its donors. As a nonprofit, ALEC is not required to disclose its donors’ identities to the public, and the 990s available through its website redact the sections that would disclose these funders, if ALEC wanted to.

The most recent 990 that ALEC makes available through its website is from 2018. However, the Center for Media and Democracy (CMD) has obtained its 2019 tax return.

CMD has identified the donors behind over $15 million that ALEC raised from 2014-19, or roughly one-third of its contribution revenue.

Other top donors to ALEC include both mainstream and ideological donor-advised fund sponsors. Sister funds DonorsTrust and Donors Capital Fund, which political megadonors such as Koch and the Mercers have used to anonymously donate to right-wing organizations, combined to donate $2.8 million. Commercial donor-advised fund sponsors, including the Schwab Charitable Fund ($335,000) and the Vanguard Charitable Endowment Program ($95,000), have also passed along their clients’ funds anonymously to ALEC.

Also high on the donor list are trade groups, including the Pharmaceutical Research and Manufacturers of America ($672,000) and the Edison Electric Institute ($85,000), as well as the foundation of the Tea Party-affiliated activist group FreedomWorks ($203,000).

The lion’s share of the remaining roughly $40 million million ALEC raised between 2014-19 likely came from ALEC’s corporate sponsors, the names of which are not disclosed. Companies such as AT&T, Comcast, ExxonMobil, Eli Lilly, Reynolds American, and UPS have funded ALEC in the past. Center for Political Accountability data show that Celgene and Pinnacle West Capital each gave ALEC between $10,000 and $22,000 in each of several recent years.

ALEC has raised between $8 million and $9 million in contribution revenue per year for the past several years, with another roughly $1 million coming from conferences, seminars, and membership dues. ALEC’s legislative members pay $100 per year in dues. Based on ALEC’s claim of 2,000 members, that would amount to $1.2 million over the six-year period. However, ALEC’s 2019 tax records show only $49,000 in membership dues, which means that ALEC is likely substantially inflating the number of legislative members.

Nelson's mischaracterization of its degree of transparency is one of several lies she has told the public in recent months.

As CMD exposed, Nelson falsely claimed that ALEC does not work on voting issues, while in reality ALEC has been working behind the scenes on voter suppression policies. And contrary to ALEC's assertion that, after blowback stemming from its work on racist voter ID laws and "stand your ground" gun law, it stays out of social issues, ALEC is working hard to attack critical race theory.

One ALEC donor of note is Thomas W. Smith ($625,000 from 2014-19), a Florida-based hedge fund founder who may be the biggest funder behind the anti-critical race theory movement, according to Popular Information. Smith is also one of the only known donors to the foundation behind The Federalist, a website that publishes far-right content including vigorous defenses of Donald Trump, coronavirus conspiracy theories, a slew of anti-critical race theory diatribes, and other racist posts that previously fell under a "black crime" tag.