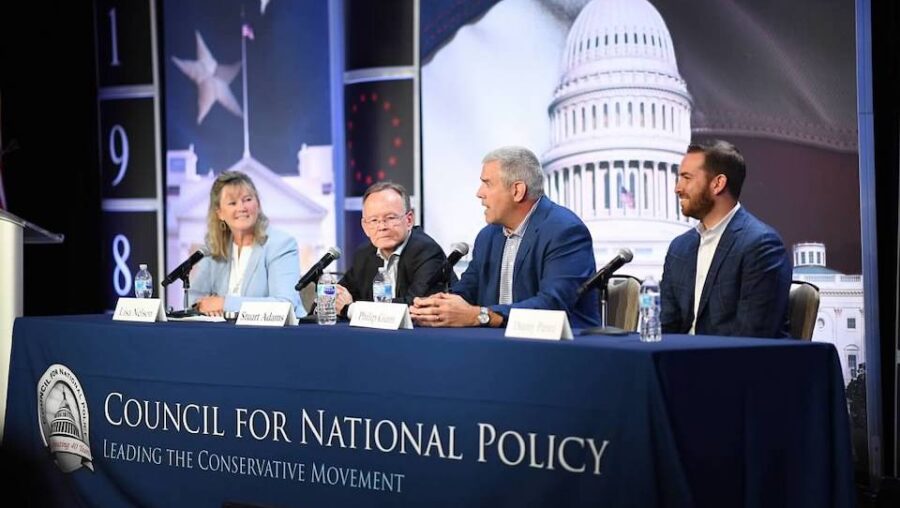 ALEC leaders present on panel "Can the States Save America?" at the Council for National Policy's 40th Anniversary meeting.

After the American Legislative Exchange Council (ALEC) faced a public backlash and exodus of corporate members over its promotion of controversial and racist voter ID and “stand your ground” gun laws a decade ago, it raised a white flag and claimed to abandon all model policy related to social issues and elections.

While it’s dubious whether ALEC ever really got out of the right-wing social legislation game, one thing is clear now: ALEC is back.

At the May meeting of the secretive, Christian-Right Council for National Policy, ALEC led two panel discussions on state legislation in which it claimed credit for helping to push and pass a host of laws to make it harder to vote, block public schools from teaching about racism in America, and protect employers from COVID-related lawsuits.

CMD obtained videos of the two “action sessions” at the meeting, titled, “Can the States Save America?” and “Saving America Through the States,” and chaired by ALEC President and CEO Lisa Nelson. Three ALEC board members – Utah State Senate President J. Stuart Adams, Mississippi Speaker of the House Phillip Gunn, and future Florida Speaker of the House Rep. Danny Perez – spoke on both panels. The second panel was interrupted by a power outage and is incomplete.

Confirmed: ALEC Leads on Voter Suppression in the States

Despite repeated claims this year that ALEC does not work on elections or voting, Nelson confirmed on video that it most certainly does, CMD reported.

When asked what ALEC was doing on election issues, Nelson replied that, “We’re holding a two-day seminar at our meeting in July on what policies need to and should be developed so that states can address that.”

“We’ve been targeting our efforts on those states that have had issues: Pennsylvania, Michigan, Arizona, Florida to a certain degree,” Nelson said. “And it’s not like we aren’t working in the other states. Idaho passed election reform. I know other states have been looking at tightening up. Everything that they’re doing is with what Bridgett Wagner said, ‘making it easier to vote, and harder to cheat.’ So, we’ll be continuing to work on that.”

In April, CMD found more than 100 Republican politicians connected to ALEC in just six battleground states who were lead sponsors or cosponsors of voter suppression bills.

Florida Rep. Perez touted Florida’s legislation in “Can the States Save America?” saying, “We have the best election process in the state of Florida.” Specifically, Perez highlighted the work they did to combat “absentee ballot fraud” to ensure there is “no more room for that.” Florida enacted new restrictions on voting by mail and ballot drop boxes in May, despite no evidence of fraud in the 2020 elections.

ALEC Role in the Insurrection

Nelson also boasted about ALEC’s role in the January attempt by insurrectionist members of Congress to overturn the 2020 presidential election. Touting the fact that ALEC has 65 alumni serving in the U.S. House and 13 in the U.S Senate, Nelson said, “It won’t surprise you that many of those were the ones standing strong after the election as we focused on election integrity, the Electoral College, and everything else.”

CMD has previously reported on ALEC’s extensive ties to the insurrection and Trump’s Big Lie.

ALEC Promotes Bans on Teaching the History of Racism

In July, CMD reported on ALEC’s role in the movement to ban the teaching of systemic racism in K-12 public schools, stressing that the Right’s obsession with the issue gained steam following a December 2020 workshop: “Against Critical Theory’s Onslaught.”

CMD noted that several ALEC lawmakers were involved in advancing bills of this nature in their respective state Capitols, but at the May Council for National Policy meeting, Nelson suggested its influence was even more widespread.

Noting what she called the “red wall” of 30 states with Republican trifectas, Nelson highlighted 13 states “that have been focused on and are working through the Critical Race Theory” (CRT) and praised Florida Gov. Ron DeSantis for signing legislation to promote the teaching of “our true history.”

Senate President Adams said to applause that Utah had just passed a bill banning the teaching of Critical Race Theory through a special session, and Nelson made it clear that ALEC was supporting and closely tracking similar legislation around the country. Nelson praised ALEC member Sen. David Bullard for leading successful anti-CRT legislation in Oklahoma to “stop[] this insanity in the schools.”

“Let’s start calling it ‘teaching racism’ instead of Critical Race Theory,” Nelson said. “We actually do have the support of the American people on this.”

Research by CMD found that ALEC members played a major role in sponsoring and moving those bills in all but four of the states Nelson listed (Idaho, Missouri, Rhode Island, and West Virginia).

The issue appears to have been a major focus of the Naples gathering, as Barr criticized Critical Race Theory in his award acceptance speech, calling it, “nothing more than the materialist philosophy of Marxism substituting racial antagonism for class antagonism,” “fundamentally incompatible with Christianity,” and “antithetical to the Christian view.”

ALEC leaders at the Council for National Policy meeting repeatedly highlighted how instrumental the organization and its members were in getting COVID liability protection bills passed in the states.

ALEC’s model bill, the “Liability Protection for Employers in a Declared Disaster or Public Emergency Act,” was approved at an emergency meeting of ALEC’s Civil Justice Task Force in the spring of 2020, and limits any liability for workplace COVID-19 illnesses and death to “recklessness or willful misconduct” by employers.

Materials examined and reported on by CMD show that Matt Fullenbaum, director of legislation with the American Tort Reform Association (ATRA), pitched legislators on the need for corporate coronavirus immunity legislation at that meeting, saying “The liability threat is real,” and offering his assistance to help move immunity bills in their states.

Having faced corporate backlash from corporate sponsors over its past forays into voter suppression, gun laws, climate denial, and cozy relationship with white nationalists, ALEC is understandably very concerned about corporations weighing in on current issues.

During the question and answer portion of the “Saving America Through the States” session, Nelson and the ALEC board members faced a question on “business” pushback to transgender sports, anti-abortion, and other “culture issues” addressed through legislation in their states.

In her response, Nelson stated that, “We’re particularly sensitive about this corporate woke culture,” and noted ALEC’s role in forming a “‘Back to Neutral Coalition’ that is really, really active.”

The Back to Neutral Coalition, a project of the National Center for Public Policy Research of which Nelson is a board member, exists online as “Stop Corporate Tyranny.” According to its website, the project is a “one-stop shop for educational resources exposing the Left’s nearly completed takeover of corporate America, along with resources and tools for everyday Americans to fight back against the Left’s woke and censoring mob in the corporate lane.”

ALEC’s boasts of its prowess at moving voter suppression and anti-CRT legislation were part of a broader three-day event celebrating the 40th anniversary of the Council for National Policy, a coalition that Anne Nelson describes as bringing together “the manpower and media of the Christian right with the finances of Western plutocrats and the strategy of right-wing Republican political operatives.”

The Council for National Policy is deeply tied to the Trump administration, #StoptheSteal, and the violent insurrection at the Capitol on January 6, CMD has reported.

In his acceptance speech, Barr criticized the “increasingly militant and extreme secular-progressive climate of our state-run education system,” which he called the “greatest threat to religious liberty in America today.”

CNP also gave its “Lantern of Liberty” award to Big Lie fueler and Trump advisor, Republican lawyer Cleta Mitchell, a “confidential” agenda acquired by CMD details. Mitchell was forced out of her job at Foley & Lardner following news that she participated in a January call in which Trump asked Georgia election officials to “find” votes to make him, and not President Joe Biden, the winner of the state.

Mitchell is now a senior legal fellow at the Conservative Partnership Institute and a leader of the FreedomWorks “National Election Protection Initiative,” where she coordinates the Right’s opposition to Congress’s voting rights bills. Both organizations have strong ties to the Council for National Policy.