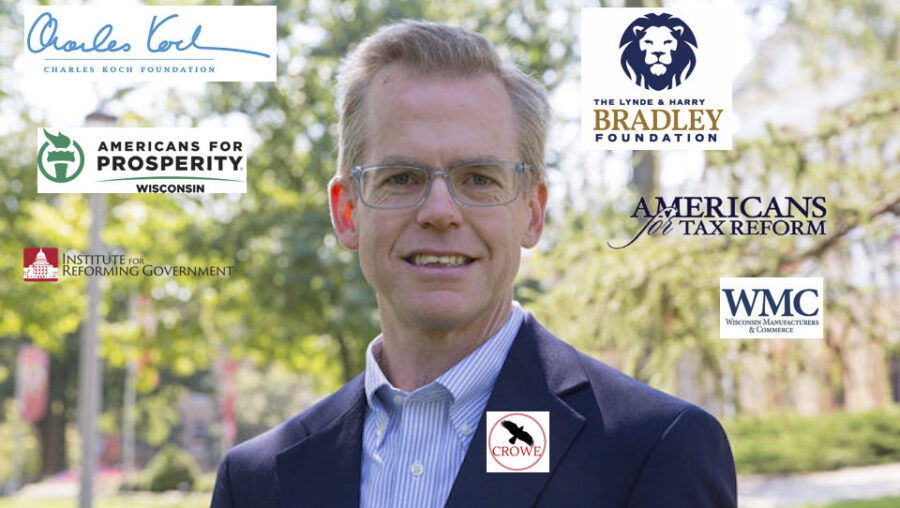 With backing from a myriad of right-wing groups, the Center for Research on the Wisconsin Economy at the University of Wisconsin–Madison released a “research report” last month on the need to eliminate the income tax in the state.

On the same day, Dec. 16, 2021, a new coalition of the Institute for Reforming Government (IRG), the Koch brothers’ astroturf operation Americans for Prosperity (AFP)-Wisconsin, Americans for Tax Reform (ATR), and Wisconsin Manufacturers and Commerce (WMC) “applauded” the study and called for Wisconsin to become the 10th state in the U.S. without an income tax.

Both Tennessee and New Hampshire eliminated their state income tax in 2021, bringing to nine the number of states that do not tax income.

So-called think tanks like the Center for Research on the Wisconsin Economy (CROWE) and the IRG, a state affiliate of the right-wing Bradley and Koch-funded State Policy Network, provide AFP, lawmakers, and other nonprofits a veneer of academic legitimacy for their radical right policy agenda.

Yet, in the past four years (2017–2021), the Milwaukee-based Bradley Foundation has contributed $1.2 million through the University of Wisconsin (UW) Foundation to fund CROWE, according to IRS filings and Bradley disclosures examined by the Center for Media and Democracy (CMD). Bradley has also provided the IRG with $310,000 (2020-2021) and has funded the tax-exempt affiliates of other coalition members, including the AFP Foundation, the ATR Foundation, and the WMC Foundation.

Bradley’s donor advised fund, the Bradley Impact Fund, has given another $87,000 (2018-2019) to the IRG. Last September its board chair Curt Culver, who also sits on the board of the Bradley Foundation, provided a “generous gift from the Curt and Sue Culver Foundation” to name Williams the first Curt and Sue Culver Professor of Economics. “His work with CROWE is significant in advising our state on economic matters,” Culver said in the announcement.

In 2017, CMD exposed Bradley’s extensive efforts to weaponize its philanthropy to build and maintain right-wing infrastructure in targeted states in order to influence public policy and lawmakers nationwide.

The press release for Williams’ new professorship also notes that this is the second named faculty position in UW–Madison’s Department of Economics that is associated with CROWE, as its Associate Director Kim Ruhl holds the Mary Sue and Mike Shannon Chair in Economics. The Shannons are among the top Republican donors in the state, according to research from the Wisconsin Democracy Campaign.

Charles Koch’s private foundation has contributed at least $240,000 to CROWE, yet fails to mention UW–Madison or CROWE on its site, where it claims to “publish the agreements for all our major, multiple-year grants to colleges and universities.” IRS filings for the Charles Koch Foundation between 2017 and 2020 show contributions of $3.2 million to the UW Foundation, CMD calculated.

CMD has found no documented Koch funding of the IRG, but ATR and WMC Issues Mobilization Council have both received contributions from Koch funding vehicles.

When CROWE was founded in 2017 with Koch and Bradley funding, a university spokesman told The Cap Times that the donors would not control the center’s research agenda nor how it conducts its research.

Ramifications of Tax Reform in Wisconsin

Williams proposes eliminating the state income tax in Wisconsin and replacing it with a substantial increase in the state sales tax, from 5% to 8%.

Even with the sales tax increase the study predicts Wisconsin would collect 12.6% less in tax revenue, yet it offers no specifics about how that would impact funds available for state programs.

The income tax is a progressive tax, meaning that people with higher incomes pay a larger percentage of their income. According to Williams’ report, “most income taxes are paid by higher income filers, and much of the income from these higher income filers consists of pass-through business income (becoming personal income).” It goes on to note that “the bottom 40% of filers, with incomes less than $26,600, paid only 1.5% of all state income taxes in 2019, while the top 20% of taxpayers, who had incomes over $85,330, accounted for 72.6% of income tax revenue.”

Williams argues that this is a problem because it discourages investment and makes the state less competitive. His report claims that, “Eliminating the state income tax, while increasing the sales tax to make up at least some of the lost revenue, would lead to increases in output, employment, consumption, and after-tax income.”

Williams fails to acknowledge that even with a lower tax rate for low-income taxpayers, “Wisconsin residents with the lowest incomes pay about a third more of their income in state and local taxes than the wealthiest residents,” according to the Wisconsin Budget Project. In other words, even though wealthier individuals are responsible for more of the revenue, lower-income people are hit harder relative to their income.

In addition, “sales taxes inevitably take a larger share of income from low- and middle-income families than from rich families because sales taxes are levied at a flat rate and spending as a share of income falls as income rises,” according to the Institute on Taxation and Economic Policy.

In praising the CROWE study, AFP-Wisconsin’s director Eric Bott stated that, “With inflation already hitting pocketbooks, and projections that the price of everyday goods will continue to rise next year, families need all the relief they can get – and this is a blueprint on how to do it while helping improve GDP growth at the same time.”

What this comment ignores is that an increase in the sales tax will force low-income households to spend more of their total income as prices rise on goods and services.

As founding director of CROWE, Williams has produced a number of studies that have drawn criticism for not holding up to academic rigor. In 2019 CROWE published a report with the Bradley and Koch-funded Wisconsin Institute for Law & Liberty claiming that expanding Medicaid in the state (BadgerCare) would cost taxpayers a whopping $600 million.

Fellow researchers at the UW-Madison panned the report, as did other economists and academics in the field. “Incredibly sloppy & dishonest work with pathetic attempts at empirical estimation,” tweeted Tim Classen, an economist at Loyola University of Chicago.

Incredibly sloppy & dishonest work with pathetic attempts at empirical estimation. This is so below your abilities @Bellmanequation Makes me sad that program with reputation for careful policy work @WIeconomics is associated with this garbage. Numerous inaccuracies in report 1/n

Later in 2019, Williams published a policy brief concluding that Minnesota’s increase in the minimum wage “led to employment losses” and that “part of the increased wage costs employers faced have been passed on to consumers through higher prices.”

At the same time, a study by the Economic Policy Institute came to an entirely different conclusion. “As Wisconsin’s and Minnesota’s lawmakers took divergent paths, so did their economies,” and “the results could not be more clear: by virtually every available measure, Minnesota’s recovery has outperformed Wisconsin’s,” the report found.

In July 2017, Williams published a study in favor of a proposed Foxconn deal then Gov. Scott Walker was negotiating on behalf of Wisconsin, which promised to bring a flat-panel display factory to the southeastern region of the state. Although infrastructure was built for the site, the factory has never opened.

The Foxconn study followed news in May 2017 that Williams had sent an email using his university account to Walker’s presidential campaign offering to provide “economic analysis and advising for Governor Walker” and stating that he is “interested in finding out more about any possibilities to get involved in aiding or advising, particularly with the Governor’s potential Presidential campaign.”

Not surprisingly, since Williams released the latest CROWE report in December, Walker has also come out in favor of eliminating Wisconsin’s income tax.

The proposal may be introduced in the state legislature this session, but given Wisconsin’s long tradition of a progressive income tax – and the huge projected budget shortfall under CROWE’s plan – its prospects of passing and getting signed into law by Gov. Tony Evers are slim.