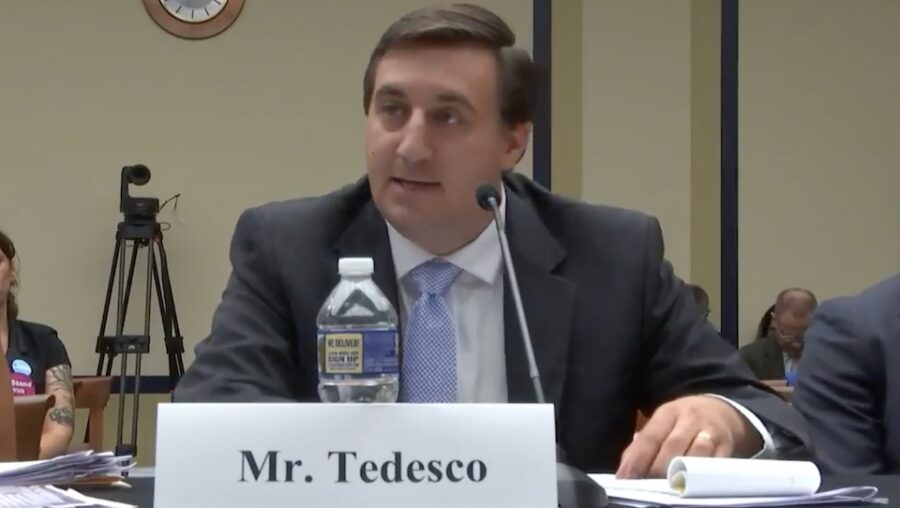 This month the Heritage Foundation awarded an anti-LGBTQ hate group a major cash prize at its annual Resource Bank conference for developing a new tool that scores corporations based on their treatment of conservative Christian beliefs in their business practices, workplace, charitable giving, and political spending.

The $100,000 Heritage Innovation Prize went to the Alliance Defending Freedom (ADF)—  designated as a hate group by the Southern Poverty Law Center (SPLC)—for its new Viewpoint Diversity Score Business Index, which launched in May. The Index is a collaboration between ADF and Inspire Insight, which runs a separate “investment screening tool that empowers investors with the biblical values data they need to make informed, God-honoring decisions” for Christians who are “called to do all things for the glory of God.”

The Business Index is part of a wider right-wing movement to push back against what it calls “woke capitalism,” a broad reference to considerations of race, gender, climate change, democracy, and other social responsibility issues in the pursuit of profits. On the surface, ADF’s index seems to be a direct response to the Human Rights Campaign’s Corporate Equality Index, which rates businesses based on “policies, practices and benefits pertinent to lesbian, gay, bisexual, transgender and queer (LGBTQ+) employees.”

ADF is a member of the Back to Neutral coalition organized with the American Legislative Exchange Council (ALEC) to “oppose ‘woke’ corporations that act to diversify their leadership or take a public stance on social and democracy issues,” the Center for Media and Democracy (CMD) and Hatewatch reported. The coalition claims to “reject the weaponization of corporations against traditional American values,” according to its Stop Corporate Tyranny website.

Heritage also awarded its new $100,000 Innovation Prize to the Independent Women’s Forum, a far-right, anti-feminist organization that evolved from a group called Women for Clarence Thomas, and the State Financial Officers Foundation, a group of Republican financial officers pushing an ultra-conservative agenda. In 2020, Heritage supported ADF with a $100,000 grant for “general operations.”

Through the Innovation Prize, Heritage plans to give up to $1 million annually “to results-oriented nonprofits for projects involving research, litigation, education, outreach, or communications” that promote Heritage’s right-wing policies in areas such as education, immigration, elections, government spending, and abortion.

At the June conference, Jeremy Tedesco, senior counsel and senior vice president of corporate engagement at ADF, promoted the new Business Index as a tool to fight woke capitalism in a talk titled “Measuring Corporate Respect for Religious and Ideological Diversity.”

“Concentrated corporate power is an equal or greater threat to free speech [and religious liberty] than government power,” he claimed. His comments echo the demonization of corporations popular with right-wing leaders like Florida Gov. Ron DeSantis (R), who has taken on Disney in recent months for opposing that state’s new “Don’t Say Gay” law.

ADF consistently spins its attacks on the rights of the LGBTQ community by claiming it’s merely protecting religious freedom. In his talk, Tedesco argued that ADF’s research shows that “pervasive speech codes” are problematic across industries and are tantamount to “censorship” that needs to stop. Given that corporations are “actively” pushing “critical race theory” and “critical gender theory” through workplace training programs, Tedesco said the Business Index was developed to help “root out and fix” this.

ADF and Inspire Insight intend to issue a full report later this summer with added polling, and are considering adding a legislative component, Tedesco told Just the News.

Heritage also invited Ryan Bangert, senior counsel and vice president for Legal Strategy at ADF, to speak about the legal work of the Christian right group. In “Beating Back Big Government: Taking on the Challenge through the Courts,” Bangert bragged about ADF’s success in blocking the Biden administration’s attempt to mandate the Covid-19 vaccine for large employers through the Occupational Safety and Health Administration (OSHA). The panel was led by Robert Alt, Buckeye Institute president and CEO, and included Kim Hermann, general counsel of the Southeastern Legal Foundation, and O.H. Skinner, executive director of the Alliance for Consumers.

In January, the Supreme Court ruled that OSHA had overstepped its authority in requiring the vaccine as a workplace safety issue. “That was a very good case study on how the conservative legal movement can respond in a very aggressive way to government overreach that is precipitated through the regulatory system,” Bangert boasted.

Fights against federal regulations are finally “bearing fruit” at the Supreme Court, Bangert added. “I think that we are going to see opportunities for that kind of coordinated action… in response to what I anticipate the federal government will be doing post-Dobbs.”

The reference was to the explosive June 24 Supreme Court decision in Dobbs v. Jackson Women’s Health Organization to overturn Roe v. Wade and eliminate the 50-year-old constitutional right to abortion in the U.S.

“Federal regulatory apparatus will be kicked into high gear following the Dobbs decision,” Bangert predicted, though he didn’t specify how. He also spoke about some of ADF’s state-based litigation, saying, “We want to see the state courts interpret their constitutions more broadly than the federal constitution.”

Bangert mentioned ADF’s work to fight to overturn the education policies of the former governor in Virginia, for example, and said that they are working to expand protections of the constitutional Free Exercise Clause there. Corporate diversity and public education offer ideal opportunities for the right to go on the offense, he argued.

With $78.8 million in revenue, ADF is one of the most well-funded right-wing litigation centers in the country. According to its latest IRS filing obtained by the CMD, it claims to have “over 70 staff attorneys” and a “network of 3,400 allied attorneys” who work to promote its extreme positions, including that a “homosexual agenda” will destroy Christianity and society.

While Trump was president, ADF became “one of the most influential groups informing the administration’s attack on LGBTQ rights,” SPLC reported. The group “works to develop ‘religious liberty’ legislation and case law that will allow the denial of goods and services to LGBTQ people on the basis of religion,” SPLC explains, as in the 2017 Supreme Court case Masterpiece Cake v. Colorado Civil Rights Commission.

Through its Blackstone Legal Fellowship, ADF brings together top law students who are devout Christians for a summer program designed to “inspire them to reimagine their careers as a way of serving God.” Since the program started in 2000, more than 2,300 fellows have graduated and are now working with ADF and its “allies” to impact the U.S. legal system while “safeguard[ing] our inalienable rights, and keep[ing] the door open for the Gospel.”

In addition to Tedesco and Bangert, at least four other ADF staffers attended the Heritage Resource Bank conference, according to a participant directory obtained by CMD.

Stay tuned to ExposedbyCMD for more coverage of Heritage’s most recent conference.