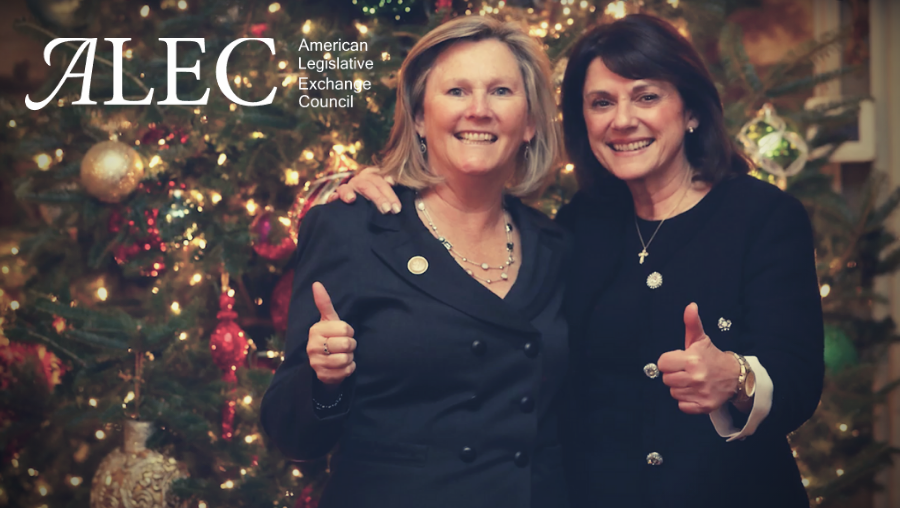 This article was produced in partnership with Southern Poverty Law Center’s Hatewatch.

Lisa Nelson, the CEO of the American Legislative Exchange Council (ALEC)—a powerful group of corporate lobbyists and mostly Republican state lawmakers who write model legislation—stated in a May panel that her organization works with allied groups to oppose “woke” corporations that act to diversify their leadership or take a public stance on social and democracy issues, according to video obtained by CMD.

“We’re particularly sensitive about this corporate woke culture,” said Nelson, using a slang term associated with social justice activism. “We have a new coalition…that is really, really active…We are certainly a part of that.”

The coalition to which Nelson referred is called “Back to Neutral.” They recently defended the notion that Amazon’s charity should allow customers to direct donations to SPLC-designated hate groups, according to right-wing media reports. Groups such as Alliance Defending Freedom (ADF) and Family Resource Council (FRC) depict LGBTQ people in dehumanizing ways or explicitly target them with discrimination, which is why SPLC lists them as hate groups.

ALEC, which gives corporations access to state lawmakers in exchange for annual dues and sponsorships, has proven to be a powerful force for implementing a right-wing and pro-corporate agenda throughout the country. In every state in the nation and at the federal level, lawmakers have introduced bills based upon ALEC models, as USA Today reported in 2019. During a period from 2010 to 2018, 600 of 2900 ALEC-inspired bills became law, the same reporting found.

ADF’s and FRC’s views about the LGBTQ community veer to the extreme far right. ADF has supported the recriminalization of sexual acts between consenting LGBTQ adults in the U.S., and criminalization abroad. It defended state-sanctioned sterilization of trans people in other countries and contended that LGBTQ people are more likely to engage in pedophilia. In 2017, ADF defended a law abroad requiring mandatory, state-enforced sterilization of transgender Europeans as a requirement for citizens seeking administrative recognition of their preferred genders.

FRC has built a reputation for making false claims about the LGBTQ community based on discredited research and junk science, typically in support of its efforts against same-sex marriage, hate crime laws, anti-bullying programs and the repeal of the military’s “Don’t Ask, Don’t Tell” policy.

Republican state lawmakers proposed a wave of anti-transgender bills this year. ALEC-linked lawmakers, including the Speaker of the Mississippi House and the president of the Utah Senate, supported these bills. Critics suggest these efforts seek to exploit trans issues as part of a broader culture war and use them to drive election turnout.

The Human Rights Campaign, an LGBTQ advocacy group, notes that this year is on pace to be the deadliest on record for transgender and gender non-conforming Americans. Anti-transgender hate crimes increased significantly in 2020 for the second year in a row, according to an FBI report.

CMD and Hatewatch reached out for comment on these findings, but ALEC did not respond.

The video obtained by CMD, recorded at the 40th-anniversary meeting of the secretive Christian-right influence group Council for National Policy in May, shows Nelson telling the private audience of activists and lawmakers: “Four or five years ago we had a session just like this, and out of that, there are a number of really good organizations. It’s not our day job to fight that issue, but we have a new coalition called the Back to Neutral coalition that is really, really active…We are certainly a part of that.”

The coalition is apparently designed to challenge companies’ attempts to expand racial equality or take positions on such issues as systemic racism or voting rights.

The Back to Neutral coalition brings together right-wing think tanks, advocacy groups, media organizations and two anti-LGBTQ hate groups, “urging American corporations to cease their radical political activism and return to their core missions … providing their customers the best possible products and services to maximize shareholders’ return on investment,” according to Stop Corporate Tyranny, a website affiliated with the group.

“We reject the weaponization of corporations against traditional American values,” the site proclaims.

Much of the Back to Neutral coalition’s work challenges companies’ attempts to expand racial and gender equality, CMD and Hatewatch found. An older nonprofit where Nelson is a board member, the National Center for Public Policy Research (NCPPR), spearheads that coalition. They purchase shares in corporations, lobby their board members and urge shareholders to vote out directors who support diversity initiatives.

Other members include ADF, FRC, the Competitive Enterprise Institute, the Council for National Policy, Charles Koch-funded advocacy organizations such as Independent Women’s Forum and the 60 Plus Association, and the Public Interest Legal Foundation, which advocates for policies that make voting more difficult, particularly for voters of color. The membership also includes activist organizations such as the Tea Party Patriots, which helped organize the rally and march immediately preceding the violent Jan. 6 insurrection.

Executive staff from all these groups are members of the Council for National Policy, according to a September 2020 membership directory obtained and first published by CMD.

The Free Enterprise Project of the NCPPR, which hosts Back to Neutral’s website, published a guide to “balance the boardroom” in May. The guide directs corporate shareholders to vote against all board members of companies such as Alphabet, Pfizer, Target and UPS, and singles out individual directors for supporting what the authors describe as “woke” corporate statements. The guide’s authors also condemn board members who supported changing their companies’ PAC donation policies following the violent attack on the U.S. Capitol on Jan. 6 and opposed GOP legislation that critics say is expressly designed to limit the ability of people to vote.

“A more comprehensively racist dystopia, and one more destructive of the individual personality, is hard to conjure,” they write.

The Free Enterprise Project casts companies’ efforts to add racial and gender diversity to their mostly white and male leadership teams as “racist and sexist.” The authors describe companies’ diversity trainings in histrionic terms, labeling them as being “extravagantly racist … all in the name of ‘antiracism.’”

Scott Shepard, the director of the Free Enterprise Project, wrote for Townhall in August that white billionaire CEOs’ stated commitments to racial equity amount to a “new racism” that will result in “millions of poverty-stricken and utterly powerless white men” who will “necessarily have to be significantly poorer and more powerless than even the poorest and most powerless people of any other races.”

Back to Neutral opposed Amazon, Apple and Google when they booted Parler, a right-wing social media platform that extremists used to plan the deadly pro-Trump Capitol insurrection, off their servers and platforms.

Most recently, NCPPR teamed up with the Koch-funded New Civil Liberties Alliance to challenge the Securities and Exchange Commission’s decision to approve Nasdaq’s Board Diversity Rules.

NCPPR did not answer CMD/Hatewatch’s questions about its relationship to ALEC and its support for hate groups. An email sent to the contact email address on the Stop Corporate Tyranny website could not be delivered.

At the May event, Nelson said it was a turning point when major companies publicly opposed voter suppression legislation in Georgia this year that appears designed to disproportionately affect voters of color.

“Coca-Cola and Delta, the Georgia stuff, was kind of the amplification writ large that kind of rocked the whole country,” she said, referring to statements made by those companies condemning the GOP’s voter suppression tactics. “But I think that now our side is at least starting to fight back on that.”

Founded in 1982, NCPPR’s board also includes others in the political network of Charles Koch, such as Edmund Haislmaier of the Heritage Foundation and Michael G. Franc of the Buckeye Institute, and Peter Schweitzer, who co-founded a think tank with Steve Bannon and has been a Breitbart News editor.

In May 2020, NCPPR and the Back to Neutral coalition targeted Amazon after the company’s charity, Amazon Smile, blocked donations it matched from going to organizations designated by the SPLC as hate groups. The NCPPR petitioned Amazon’s board of directors to stop using SPLC’s hate designations to guide the company’s philanthropy, without success.

Justin Danhof, executive vice president of NCPPR and a member of the Council for National Policy, said that Amazon blacklisted anti-LGBTQ hate groups, including FRC, “for the sin of being a conservative Christian organization.”

O’Neil, who once blogged for the reactionary, junk-news website PJ Media, wrote over 200 posts for that publication about SPLC since August 2017, starting in the aftermath of the deadly “Unite the Right” rally that white supremacists staged in Charlottesville, Virginia. He has also published a book describing SPLC as a “a pernicious threat to America’s free speech culture,” according to its blurb. FOX News digital hired O’Neil as an editor this year. CMD and Hatewatch reached out to FOX News about O’Neil’s work for Back to Neutral and the company did not respond. O’Neil also did not respond to a request for comment.

Even in an increasingly radicalized conservative community in the U.S., these hate groups are extremist and do not represent the mainstream, according to recent polling and stances taken by the Republican National Committee and some GOP members of Congress.

Civil rights nonprofit Color of Change, CMD and other groups have in the past urged corporate members of ALEC to sever ties with them. These civil rights groups criticize ALEC over their role in writing racially discriminatory laws. At least 114 corporations have cut ties with ALEC since the activism began in 2011.

“Our members’ efforts have successfully exposed how major corporations, through ALEC, supported discriminatory voter ID laws, ‘shoot first’ laws like the one that protected Trayvon Martin’s killer, and other policies that undermine the rights of African Americans and endanger our communities,” stated Color Of Change executive director Rashad Robinson in a press release at the time.

In June, CMD and more than 300 other organizations called on ALEC’s corporate members, including Duke Energy, Eli Lilly, FedEx and Anheuser-Busch, to leave the organization over its efforts to push legislation that will limit the number of Americans who are able to vote and effectively suppress turnout by voters of color in future elections.

ALEC is also spreading misinformation about critical race theory and pushing legislation that bans teaching about systemic racism in public schools. White nationalists have helped propel that issue into mainstream discourse, depicting the effort to teach about racial injustices at school as being racist against white people.

ALEC also did not comment on opposition to critical race theory and its role in creating policies that make it harder for people to vote.

Michael Edison Hayden and Raven Hodges contributed to this reporting.