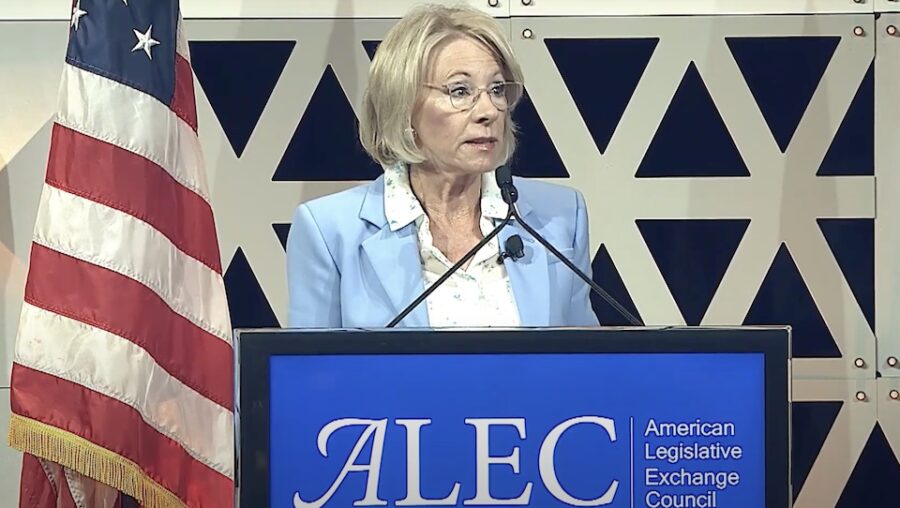 This piece is published in partnership with True North Research, and is viewable on its site here.

Recent documents acquired by the Center for Media and Democracy (CMD) reveal a new initiative targeting local politicians–especially school board candidates–with right-wing messaging, policies, and financial resources. This new targeting of school boards is being spearheaded by the American City and County Exchange (ACCE), a project of the American Legislative Exchange Council (ALEC), a pay-to-play group where corporate lobbyists and special interest groups vote as equals on “model bills” with state legislators behind closed doors.

ACCE describes itself as “the nation’s preeminent forum for elected local officials,” even though it has far fewer members than bipartisan groups like the U.S. Conference of Mayors, the National Association of Counties, or the National School Boards Association. What it does have though is a track record of advancing the legislative wish lists of special interests willing to give it money, like the PVC pipe industry facing lawsuits for the leaching of chemicals in people’s water supply and the plastic bag industry, a product of fracking and other carbon refinery operations.

ALEC has been one of the driving forces behind the manufactured outrage around schools. ALEC’s annual budget is around $8 million, which has included substantial funding from Koch Industries and oil billionaire Charles Koch’s fortune over the past 30 years, plus money from Big Tobacco, Big PhARMA, and other billionaires who want to dismantle public schools, such as the DeVos and Walton families.

According to previous reporting by CMD, ALEC held a workshop in December 2020 promoting the Right’s false narrative about critical race theory being taught in public schools that featured speakers from other groups tied to anti-public school zealot Koch, including the Heritage Foundation, Manhattan Institute, and American Enterprise Institute, which have spent decades attacking public education.

Just weeks after this ALEC workshop, the dark money attack dog, Moms for Liberty, was launched to target public schools. Shortly thereafter another dark money group, Parents Defending Education, was created. As of February 2022, right-wing state officials in 36 states had introduced bills or other restrictions limiting the truthful telling in public schools of history and teachings about race, racism, or the contribution of specific racial or ethnic groups.

The ACCE attack plan “focus[es] more on [recruiting] school board members to join” and using these new members to expand ACCE. A recent CMD-acquired ALEC board document calls the ALEC-ACCE collaboration “unparalleled” and an “unprecedented opportunity” to offer “collaboration between all levels of government.”

Indeed, to this end, emails obtained by CMD from April 2022 show that ALEC’s Florida State Chair and GOP state Rep. Spencer Roach personally contacted right-wing school board candidates and other local officials to invite them to a luncheon with Roach and ACCE director Andre Cushing.

Roach’s political PAC, along with dozens of other state GOP PACs (including Florida Gov. Ron DeSantis’), used their campaign funding to funnel money to right-wing school board candidates during Florida’s August 2022 primaries. At least two school board candidates confirmed to attend Roach’s April luncheon received campaign contributions from both Moms for Liberty’s and Roach’s PACs.

True North Research’s recent playbook on the coordinated dark money attacks on schools highlights the collaboration between these groups and local, state, and national GOP leaders.

Despite ALEC CEO Lisa Nelson claiming “ALEC doesn’t work on voting issues,” this is one of many efforts focused on influencing elections to the benefit of right-wing candidates. An internal board document uncovered by CMD outlines ALEC’s collaboration with “several of our national partners” to create “model language” for state leaders “aimed at discussing the timing of local school board elections.”

According to this new trove of documents, ALEC is leaning into the school board issues that have galvanized right-wing activists, whose talking points and tactics have been buoyed by mostly undisclosed donors.

One known funder of one of the key groups targeting school board races, Moms for Liberty and its PACs, is Julie Fancelli. She’s an heir to the Publix grocery store fortune who helped underwrite the events on the mall on Jan. 6 where Trump incited the Capitol insurrection. ALEC has deep ties to the attempts to overturn the 2020 election, including 30 legislative members who signed a letter to Vice President Mike Pence asking him to not certify the results. ALEC has also worked with Leonard Leo’s “Honest Election Project,” which has  tried to operationalize some of the changes to election law Trump outlined in his speech on Jan. 6.

Alyssa Bowen is managing editor and senior researcher for the progressive watchdog group True North Research where she tracks and writes about dark money in U.S. politics. She received her Ph.D. in history from the University of North Carolina, Chapel Hill in 2021 and has bylines in The Nation, Rewire News Group, Ms. Magazine, and Truthout.

All articles by Alyssa Bowen