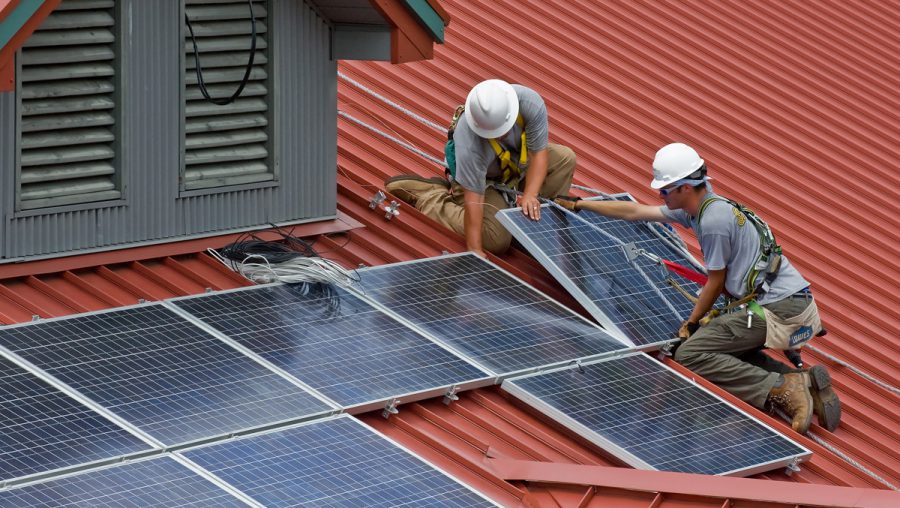 Leaked audio offers new evidence that Florida utilities and their allies have sought to deceive the public into believing that the utility-funded Amendment 1 ballot initiative is pro-solar.

Two energy industry watchdog organizations, the Center for Media and Democracy and the Energy and Policy Institute, obtained the audio recording, which captures the James Madison Institute (JMI), a Florida-based think tank and member of the national State Policy Network (SPN), boasting that it and other Amendment 1 backers successfully misled the public into believing it is pro-solar.

Speaking to other State Policy Network groups around the country, JMI’s Vice President of Policy and Director of the Center for Prosperity, Sal Nuzzo said:

“The point I would make, maybe the takeaway, is as you guys look at policy in your state or constitutional ballot initiatives in your state, remember this: solar polls very well. To the degree that we can use a little bit of political jiu-jitsu and take what they’re kind of pinning us on and use it to our benefit either in policy, in legislation or in constitutional referendums if that’s the direction you want to take, use the language of promoting solar, and kind of, kind of put in these protections for consumers that choose not to install rooftop.”

“The people pushing Amendment 1 were very clear about the utilities’ plan when they thought the public wasn’t listening: they’re trying to confuse voters into believing their utility-backed ballot initiative is pro-solar. It’s a dirty trick, and Floridians should show them that they’re too smart to let them get away with it,” said David Pomerantz, Executive Director of the Energy and Policy Institute.

“State Policy Network groups across the country consistently put the interests of their fossil fuel funders ahead of protecting consumers and the environment. The James Madison Institute claims to be a free-market group, so why doesn’t it allow the informed collective wisdom of consumers in Florida decide this issue? Its pretty clear they know the only way they can help the utilities win this battle is by misleading voters,” said Nick Surgey, Director of Research at the Center for Media and Democracy.

Nuzzo was speaking at the “Energy/Environment Leadership Summit,” on October 2 in Nashville, TN. The Summit is an annual event organized by the Thomas Jefferson Institute for Public Policy that takes place alongside the State Policy Network annual meeting. The State Policy Network is a web of right-wing, state-based think tanks around the country which claim to push for “market-oriented solutions” but whose agenda often reflects the interests of its donors. The Thomas Jefferson Institute is the SPN think-tank in Virginia.

Another panelist alongside Nuzzo at the dinnertime event came from the Edison Electric Institute (EEI), the trade group for investor-owned electric utilities including Florida Power & Light, Duke Energy, TECO and Gulf Power. That speaker, EEI Director of External Affairs Todd Wynn, encouraged SPN groups to work with utilities to attack solar-friendly policies. EEI is a donor to the State Policy Network.

In the recording, Nuzzo acknowledged that a competing ballot effort which aimed to remove Florida’s ban on third-party sales of solar power enjoyed popular support, including from the political right:

“This amendment was actually polling in the 70s. Why? Because the Tea Party was behind it. We even saw some folks that we would normally play pretty well with, the Chambers of Commerce locally, the business community was kind of galvanizing behind it. Why? Because if you’re not a utility generating organization, this kind of helps you because it makes it a little bit easier for you to go that route and sell it [solar electricity].”

That legitimately pro-solar ballot initiative was backed by a coalition of environmentalists, solar advocates and conservative groups called the “Coalition for Solar Choice” in 2014 and 2015.

“So Consumers for Smart Solar came to JMI and said you guys are, you know, the adults in the room. You’re the ones that have access to the research, to the scholars, to the State Policy Network, to a lot of the national organizations. We need some help because not only are they going to get the 700,000 signatures to get it on the ballot, it’s actually polling in the 70% range.”

The Coalition for Solar Choice ballot initiative did not qualify for the 2016 ballot, thanks in part to deceptive ballot collection tactics employed by the utility-backed Consumers for Smart Solar group.

Nuzzo went on to describe how Consumers for Smart Solar ensured that its ballot initiative would appear to be favorable for solar power, and how it was designed expressly to submarine the pro-solar effort from the Coalition for Solar Choice:

“What they don’t have the right to do is generate their utilities for their – when the sun is out, and receive utilities from traditional utilities while shifting costs on to other ratepayers. So it essentially negated exactly what the challenge was and what Southern Alliance for Clean Energy and Tom Steyer and all these other folks were after.”

Amendment 1 did qualify for the ballot; it has received over $21 million of funding, primarily from the state’s monopoly utilities. According to Florida Department of State records, Florida Power & Light has spent $5.5 million supporting Amendment 1, Duke Energy has spent $5.7 million, Tampa Electric Co. has spent $3 million, in addition to Gulf Power’s $2.1 million. The remaining funds have come primarily from front groups which are also funded by utilities and fossil fuel interests.

The solar industry, environmental advocates, and editorial boards around the state have all argued that Amendment 1, if it passes, would be incredibly harmful to Florida’s solar prospects.

Florida Power & Light has said that it is not trying to deceive voters into thinking that Amendment 1 is pro-solar, contrary to Nunn’s remarks. FP&L President and CEO Eric Silagy defended Amendment 1 and denied assertions that it aims to confuse voters in a News Service of Florida article 6 days after Nuzzo made his remarks at the SPN Conference:

“It’s pretty clear,” Silagy said about the amendment on Oct. 8. “I don’t think there is anything sinister or nefarious…”

All articles by David Pomerantz