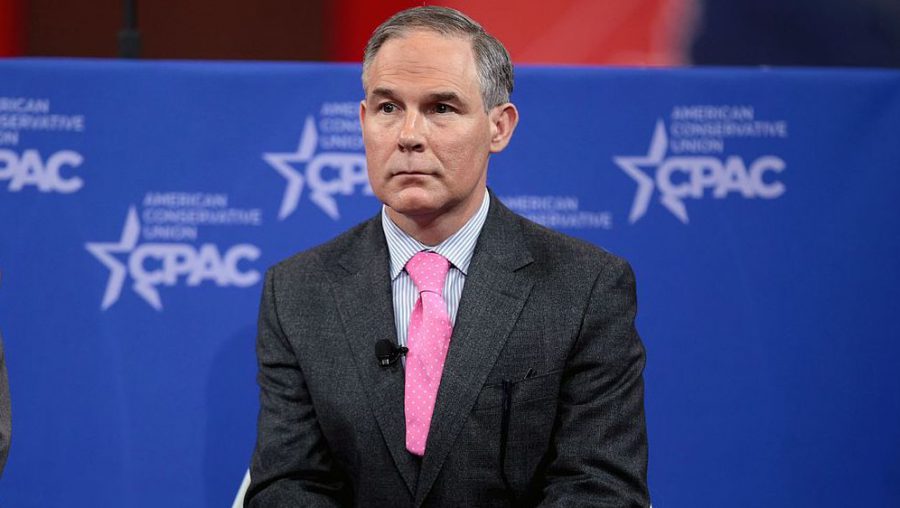 Oklahoma Attorney General Scott Pruitt, President-elect Trump’s choice to be the new head of the Environmental Protection Agency (EPA), coordinated an effort by Republican state attorneys general to oppose the confirmation of Merrick Garland to the Supreme Court.

Pruitt then used this effort as a basis to request financial support for his federal Political Action Committee (PAC), called Oklahoma Strong.

In a March 2016 email (see below) that he sent to supporters of Oklahoma Strong, Pruitt boasted of his effort to block Garland’s confirmation.

Donors to Oklahoma Strong include major energy interests and leading D.C. law firms. Many of these donors have interests before the courts that could have been significantly affected by the confirmation of Garland.

Oklahoma Strong has raised more than a quarter of its total funds from the energy industry, according to reporting by Politico. These have included contributions from Joe Craft, the President of the coal firm Alliance Resources, and from J. Larry Nichols, the founder of the fracking giant Devon Energy.

Pruitt is well known to have strong ties to the energy industry. A 2014 New York Times investigation revealed that Devon Energy lobbyists had drafted letters for Scott Pruitt, which he in turn sent to the EPA and to the Department of the Interior under his own name and with almost no changes. Eric Lipton of the Times received a Pulitzer Prize for this reporting.

Other donors to the PAC have included David Green, the CEO of Hobby Lobby, and Harlan Crow, the billionaire real estate developer from Texas who is reported to be a close personal friend of Justice Clarence Thomas. Partners from major U.S. law firms with interests at the Supreme Court, including Reginald J. Brown at Wilmerhale and David B. Rivkin at Baker Hostetler have also contributed.

On March 16, 2016, President Obama nominated Merrick Garland to become a Supreme Court Justice, taking the seat vacated by the late Antonin Scalia. The next day, a letter was sent to Senator Grassley, Chairman of the Senate Judiciary Committee, and to Senator McConnell, the Senate Majority Leader, urging them to block Garland’s confirmation. That letter was signed by 21 state attorneys general, all Republican.

According to the email from Oklahoma Strong, Pruitt had asked his fellow Republican attorneys general to sign the letter, acting in his role as board chair of the Rule of Law Defense Fund (RLDF).

The RLDF is a so-called “501C4” organization, which means it is not required to publicly disclose any information about its sources of funding. It was created in 2014 by the Republican Attorneys General Association (RAGA), with which it shares staff and office space and holds some joint events.

RLDF is highly secretive about what it does. For example, it does not put any details about its activities or meetings on its website.

Despite this, the Center for Media and Democracy obtained an agenda for one RLDF meeting via a public records request. This meeting, held in April 2016, featured a session about blocking the Clean Power Plan. Scott Pruitt was a speaker on that panel, which also included David Rivkin, a partner at the law firm Baker Hostetler. Rivkin, also a donor to Oklahoma Strong PAC, is representing the state of Oklahoma in the lawsuit against the Clean Power Plan, which will likely end up at the Supreme Court.

Currently, only two funders of RLDF have been identified, both with deep ties to the fossil fuel industry.

One is Freedom Partners, the mega-fund created by Charles and David Koch, which gave RLDF $175,000 in 2014. The Kochs own Koch Industries, which operates a network of oil and natural gas pipelines and refineries.

That isn’t the only connection of RLDF to the Kochs. In 2015, RLDF appointed Samantha Dravis as its President, in a shared position with RAGA where she serves as Policy Director and General Counsel. Dravis joined RLDF from Freedom Partners, where she had been the organization’s Legal Counsel.

The other known RLDF donor is the Edison Electric Institute (EEI), which gave RLDF a $25,000 contribution in 2014. EEI is the trade association for the utility sector, and has also engaged in litigation in an attempt to block the Clean Power Plan.

Unlike RLDF, RAGA must publicly disclose its funding sources. According to the Center for Media and Democracy’s analysis of IRS filings, RAGA has raised almost $4 million from fossil fuel industry connected entities since 2014, including ExxonMobil, Peabody Energy and the American Petroleum Institute.

The Center for Media and Democracy has previously released other materials on both RAGA and RLDF. These materials demonstrate the efforts of the two organizations to block the Clean Power Plan, and to help stall state investigations into ExxonMobil for its role in promoting climate change denial.

A Senate confirmation hearing is expected soon on Scott Pruitt’s nomination to be Administrator of the EPA. Following his selection by President-elect Trump, Pruitt has announced that he has stepped down from his position at RLDF, and has said that he will close down his Oklahoma Strong PAC. Despite this, little is known about what RLDF did during Pruitt’s time as board chair. As part of the confirmation process, Democrats on the Senate Environment and Public Works Committee have written to Pruitt asking him to disclose information about his role as board chair of the RLDF.

Image above is of Scott Pruitt speaking at the 2015 CPAC in Washington, D.C.. Photo by Gage Skidmore, used courtesy of WikiMedia.