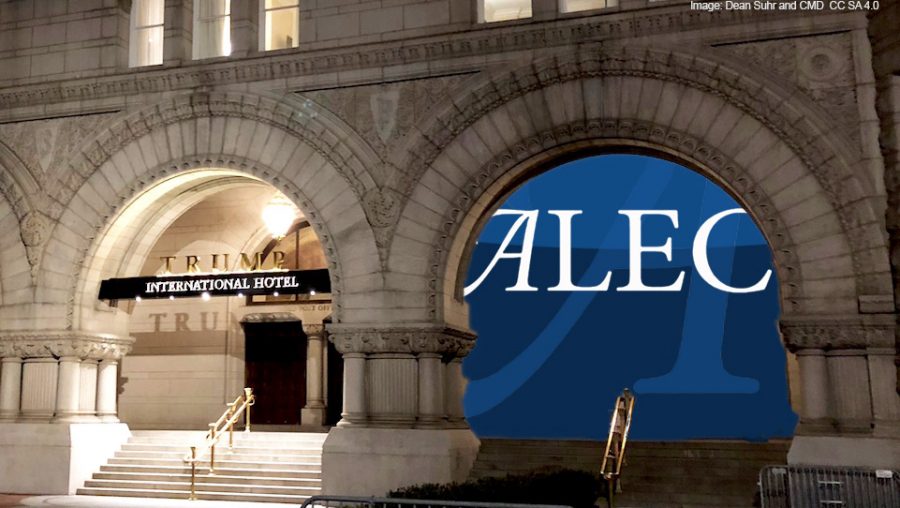 Tickets for the event are a whopping $500 a piece, about the same rate for one night at the hotel. Alternatively, state delegations can get a lobbyist to sponsor a table for $10,000.

The Wall Street Journal‘s Kimberley Strassel will serve as the “Mistress of Ceremonies,” but the rest of the program has not been announced. With the Trump International Hotel being just over a mile away from the White House, it is likely one of the many with ALEC ties in the administration will be there.

Lisa Nelson, CEO of ALEC, was giddy after Trump was elected, telling members and funders that the Trump administration, “does have the potential to be an ALEC administration. It is full of the people and ideas we’ve advanced since 1973… Now is our time. And ALEC is ready.”

And ALEC has been helpful to Trump. ALEC member legislators led the fight on eliminating the state and local tax deduction (SALT), a key component of Trump’s massive tax break for the wealthy and corporations. More recently, 308 state legislators, in partnership with ALEC, sent a letter of support for Judge Brett Kavanaugh to Senators, calling him “the single most qualified person in the country to serve on the Supreme Court.”

While some ALEC alumni — most prominently former EPA Administrator Scott Pruitt — have been dropped from Team Trump, many others have hung on.

As Governor of Indiana, Pence lobbied for ALEC to state legislators:

As a governor, I cannot say enough how important ALEC is in my state and across the nation. Indiana is fortunate to have many of our legislators as members of ALEC.

I am writing today to ask you to consider membership in one of the nation’s leading policy organizations, the American Legislative Exchange Council (ALEC).

Many who have remained with Trump since he was elected have ties to ALEC.

Ambassador to the United Nations Nikki Haley is an ALEC alumna. She pushed many ALEC model bills as Governor of South Carolina and state representative, including voter ID laws and school vouchers.

Secretary of Energy Rick Perry made passing ALEC model bills a priority when Governor of Texas, marking some as “emergency” legislation, and has spoken at ALEC meetings. ALEC has a profile of Perry up on its website. This morning, Perry welcomed ALEC to the White House and spoke to the ALEC delegation about “American energy dominance.”

Secretary of Education Betsy DeVos is a long time funder of ALEC and shares its goal of privatizing education. DeVos headlined the 2017 ALEC Annual Meeting and stated in a speech that, “The President has said that this administration will reduce the federal footprint in education, and he signed an executive order this past April instructing our Department to review every regulation that might obstruct parents, teachers, communities and states from best-serving their students.”

Secretary of Agriculture Sonny Perdue has long been a friend of ALEC. As Governor of Georgia, he passed the nation’s second voter ID law based on an ALEC model bill. Perdue also rolled out one of the most expansive school privatization programs at the time in 2008. ALEC also praised Perdue for challenging the Affordable Care Act.

Others in the Trump administration have spoken at ALEC meetings as well, including Secretary of Housing and Urban Development Ben Carson in 2015, Counselor to the President Kellyanne Conway in 2016, Secretary of Labor Alex Acosta in 2017, Health and Human Services Secretary Alex Azar in 2018, and Department of Transportation Secretary Elaine Chao in 2018.