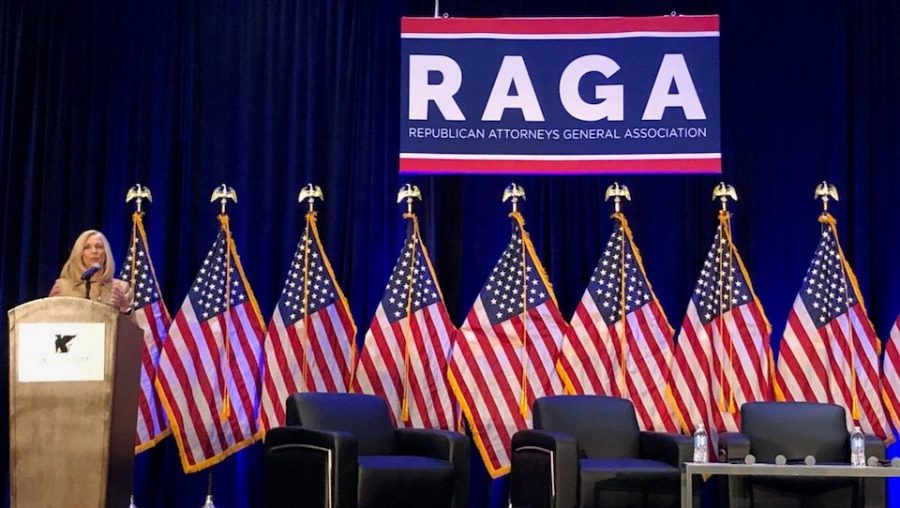 As Republican Attorneys General faced 2018 re-election bids and continued their legal challenges to Obama-era environmental regulations, fossil fuel companies poured millions of dollars into the Republican Attorneys General Association (RAGA), a political nonprofit that spends money to elect GOP AGs. That trend has continued into this year. From 2017 through mid-2019, oil, gas, and coal companies, trade associations, fossil fuel utilities, and industry executives donated over $6.7 million to RAGA, a CMD investigation has found. Fifty-five companies and trade groups and four executives made these donations.

RAGA’s $9.6 million haul in the first half of 2019 dwarfs that of 2015, the last similar fundraising period. That amount includes contributions to RAGA’s related entities such as the Rule of Law Defense Fund, a 501(c)(4) dark-money group founded in 2014 and funded by Koch-linked political groups, the Edison Electric Institute, the Judicial Crisis Network, and the Federalist Society in past years.

In addition to helping elect Republican candidates, the corporations’ donations to RAGA score them personal meetings with GOP attorneys general. At four private events each year at luxury hotels, industry lobbyists, lawyers, and executives get exclusive access to the attorneys general, and the AGs have been happy to oblige the corporations’ wishes. Numerous GOP AGs have launched lawsuits attacking Obama-era environmental regulations such as the Clean Power Plan, the Clean Air Act, the Waters of the United States rule (WOTUS), and ozone caps.

Other perks for annual RAGA donors include access to additional RAGA events, policy conference calls, monthly political briefings, passes to the annual Edmund Randolph Club retreats, and the option to pitch topics and be panelists at conferences. One RAGA event this year, in April, was an oil and gas summit to Houston.

In some cases, oil and gas corporations extend their communications with attorneys general beyond RAGA events. For example, former Oklahoma Attorney General Scott Pruitt had secret meetings with industry lobbyists and challenged EPA regulations by sending letters to the agency that appeared to be written by Pruitt’s office but were actually authored by lobbyists for oil and gas exploration company Devon Energy. Pruitt filed 14 legal challenges to environmental regulations during his tenure as Oklahoma AG.

CMD sued Pruitt for access to thousands of emails between Pruitt’s office and energy interests and sued to stop the emails’ destruction. The correspondence records led to national coverage of Pruitt’s close relationships with Devon Energy, the American Fuel & Petrochemical Manufacturers trade association, the Koch-backed Americans for Prosperity, and other industry interests.

Pruitt became Trump’s director of the EPA in 2017, but his fellow Republican AGs continue to fight Obama’s environmental regulations in the courts, buoyed by election support from RAGA.

In early 2017, as Democratic AGs began to sue the Trump administration, RAGA ramped up its electoral operation, ending a longstanding agreement with its Democratic counterpart to refrain from targeting the other party’s incumbent AGs.

In the 2018 Arizona elections, Republican Attorney General Mark Brnovich faced a Democratic challenger, and voters weighed in on a ballot measure to require utility companies to generate 50 percent of their electricity from renewable sources by 2030. Brnovich ran against the measure and was buoyed by Pinnacle West Capital–the holding company that owns Arizona Public Service, the state’s largest public utility–which gave $200,000 to RAGA in the 2018 election cycle. Pinnacle West PAC also donated $7,000 to the Brnovich campaign, and CEO Don Brandt gave $2,500.

RAGA put nearly $3.7 million into Arizona state elections in the 2018 cycle, giving $2.9 million to Arizona for Freedom PAC, which spent most of that on ads, and over $750,000 to the RAGA Arizona PAC, which transferred the money to the state Republican Party.

Democratic challenger January Contreras had backing from the Democratic Attorneys General Association and the Tom Steyer-linked outside group Clean Energy for a Healthy Arizona, which spent several million dollars supporting her, but she lost a close race to Brnovich.

Far more expensive was the ballot measure campaign, the most costly in Arizona’s history. Pinnacle West poured $32.3 million into political group Arizonans for Affordable Electricity, which campaigned against the measure, and Clean Energy for a Healthy Arizona, financed mostly by Steyer’s NextGen Climate Action, spent $24 million in favor. The measure lost by a big margin.

In 2015, Brnovich and Arizona Public Service joined the multi-state lawsuit against Obama’s Clean Power Plan. After Trump was elected, in late 2016, Brnovich joined 23 other states in a letter urging the new president-elect to withdraw the Clean Power Plan.

Also in 2015, Brnovich led a coalition in suing the EPA over restrictions on ozone, which coal company Murray Energy had also legally challenged.

Some of the same fossil fuel companies that financed RAGA including Anadarko Petroleum, Extraction Oil and Gas, Noble Energy, and PDC Energy also gave millions of dollars to another outside group, Protect Colorado, which spent a massive $40 million advocating the oil and gas industry’s interests around two ballot measures.

The 2018 AG race in Michigan was another open contest between candidates with a stark contrast on energy policy. Republican candidate Tom Leonard ran with explicit support for an aging Enbridge oil pipeline, while Democrat Dana Nessel pledged to shut it down in her first act as attorney general.

Enbridge did not donate to RAGA in the 2018 cycle, but ExxonMobil, with which it co-owns multiple pipelines, gave over $125,000. This year, Enbridge contributed $25,000 to RAGA.

RAGA spent at least $1.5 million backing Leonard and gave $6,800 to the Leonard campaign, but Nessel won the race. Under Nessel, Michigan has joined other Democratic states to challenge Trump initiatives including its Clean Power Plan replacement. She also withdrew the state from the Republican challenge to the Clean Power Plan and from a Murray Energy lawsuit against EPA clean air regulations, which the state had joined as a petitioner.

In the next AG race, in 2022, RAGA will very likely harness cash from its fossil fuel donors in an attempt to reinstate a pro-industry Republican.

In the Longhorn State, Attorney General Ken Paxton, RAGA’s chair in 2019, ran for re-election against Democrat Justin Nelson in 2018. Like other Republican AGs seeking new terms, Paxton got major support from RAGA, which made $650,000 in direct donations to his campaign as well as $21,500 in in-kind contributions for research. Paxton won the race by 3.6 percent of the vote.

Paxton’s RAGA biography boasts that he has sued the Obama administration 22 times. The suits include challenges to the Clean Power Plan, the EPA’s “Regional Haze” rule, methane emission standards, and restrictions on coal mining near waterways.

This year, Paxton sued ExxonMobil over a fire at its chemical plant that injured 37 people, the fourth fire that has occured at the Bayton, Texas plant this year. But his lawsuit, filed at the state level, could upend two suits by the county in county court, putting Paxton in charge of the whole operation. Some, wary of his fossil fuel-friendly history, worry he might go easy on the oil giant.

In 2019, Republicans flipped two state AG offices and held onto another. In Kentucky, RAGA made its biggest ad pre-booking expenditure ever: $3.25 million benefiting GOP candidate Daniel Cameron, who would go on to win the race. Coal is a major industry in the state, but the election centered more on health care and the opioid crisis.

In Mississippi, successful AG candidate Lynn Fitch got a $150,000 in direct campaign donations as well as more than $76,000 worth of in-kind contributions from RAGA’s Mississippi PAC, according to state campaign finance data.

In Louisiana, Republican Jeff Landry won re-election. In January, Landry railed against EPA regulations in an op-ed, criticizing the Clean Power Plan and fuel efficiency increases and praising Trump for cutting numerous environmental standards. RAGA has elected Landry to be its 2020 chair.

Ten states have AG elections in 2020, including Utah, where Republican Sean Reyes will seek re-election. Under Reyes, Utah became the first state in a 10-state coalition to challenge Obama’s Waters of the United States rule, which expanded the definition of protected waters under the 1972 Clean Water Act.

In 2017, along with a number of other GOP AGs including Landry and Paxton, Reyes signed a letter to Pruitt’s EPA urging it to “respect the states” regarding WOTUS.

“The 2015 WOTUS Rule is a clear example for federal overreach that infringed on the States’ traditional role as primary regulators of land and water resources within their borders,” said Reyes in August of this year, after a federal district court maintained an injunction against the WOTUS rule that Reyes and other GOP AGs sought. In October, the EPA and the Army Corps of Engineers officially repealed the rule, reinstating the less strict standards that were in place before the rule

CMD sued Reyes for withholding public records about his involvement in RAGA and the Rule of Law Defense Fund, generating local and national coverage of RAGA’s pay-to-play arrangement with corporations, including fossil fuel companies. The suit is still pending.

Nine other states–Indiana, Missouri, Montana, North Carolina, Oregon, Pennsylvania, Vermont, Washington, and West Virginia–also have AG races in 2020. In Indiana and Missouri, Republican incumbents are seeking re-election. Indiana AG Curtis Hill, like his fellow GOP AGs, has advanced energy industry interests, leading 15 states in two 2018 friend-of-the-court briefs seeking dismissal of California and New York’s lawsuits against the industry over its effect on climate change. Coffman, Paxton, Reyes, and Landry were among the other signatories of the briefs.

Meanwhile, RAGA has supported the AGs’ efforts. In 2018, it publicized Arkansas AG Leslie Wheeler’s appearance on a Fox News show during which she discussed her opposition to the Clean Power Plan. RAGA’s Rule of Law Defense Fund hosted a panel in October 2019, featuring South Carolina AG Alan Wilson, about strategies to combat climate change legislation.