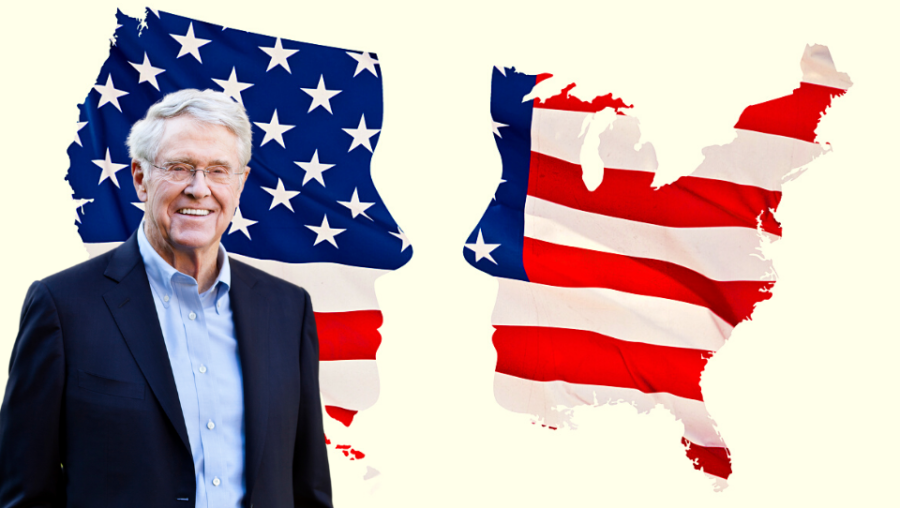 Image adapted from images by Gavin Peters (Koch) and ndla.no.

At 85, the most influential Republican political donor in modern U.S. history says he has some regrets. According to soft-ball corporate media interviews and a new book he’s written, billionaire industrialist Charles Koch wishes that his more than five decades of organizing and funding far-right, partisan politicians, advocacy groups, and academia had slightly less partisan results.

Koch’s latest media makeover strains credulity. The man spent his entire adult life, while helming one of the largest and dirtiest private companies in the nation, working to fundamentally alter society and move it towards his ideal: a libertarian utopia with low taxes, no unions, weak regulations, and unlimited corporate political spending.

Most recently, numerous House and Senate Republicans that he, his family, his company, and his political machine helped elect attempted to overturn the election just hours after hordes of Trump supporters mounted a deadly insurrection at the U.S. Capitol.

Koch’s efforts have had a tremendous impact on the country. His massive grants to ideological, free-market university programs have created a body of right-wing economics literature. His political advocacy groups have grown into a network as large as either major political party. The hundreds of state lawmakers he helped elect have gerrymandered legislative and congressional districts with partisan and racial bias, making legislatures and U.S. House delegations far more conservative than the states they represent. Elected officials and agency heads he has supported have cut taxes on corporations and the wealthy and struck down environmental regulations.

The sum of these many parts is a major, industrialized nation wedded to fossil fuels, without universal health care, and with lower taxes than most comparable countries, where Republicans govern the majority of its states, and right-wing ideologues occupy scores of powerful court seats.

Koch’s success thus far still isn’t enough for him. As he perfected the pages of his latest book, trying to cast himself as a unifier and good-hearted philanthropist, his political operation poured tens of millions of dollars into election ads and canvassing operations for mostly Republican candidates. Many of those candidates would win their races and proceed to challenge the valid election of Joe Biden.

A recent CMD report found that Koch Industries was the biggest corporate donor to super PACs and other outside groups that spent money to help elect many of the 147 House and Senate Republicans who voted to overturn the election and disenfranchise millions of voters. In just these members’ most recent election cycles, Koch Industries donated nearly $14 million to those groups. Charles Koch’s Americans for Prosperity and its affiliated super PAC spent close to $18 million on ads and other means to help elect a number of members who attempted the legislative coup.

As OpenSecrets found, Koch PAC was also the biggest direct donor to the campaigns of the election-denying members of Congress, having contributed over $930,000.

And, to make sure Republicans retained their Senate majority under Mitch McConnell, Koch’s Americans for Prosperity Action (AFPA) spent millions on one of the two Jan. 5 Georgia Senate runoff elections. AFPA spent at least $13.9 million on mailers, digital ads, door hangers, and canvassing in favor of incumbent Republican Sen. David Perdue or opposing his challenger, Democrat John Ossoff. Perdue campaigned on the “Big Lie” of rampant voter fraud and encouraged other senators to vote against the election results, saying he would do the same if he was eligible to do so.

Part of the Koch election effort was run by the Libre Initiative, a project of Americans for Prosperity that has courted Hispanic voters for nearly a decade, which went “all-in on the Georgia runoffs,” according to The New York Times.

Along with AFPA, Libre Action spent considerable resources on canvassing, knocking on doors for vulnerable GOP incumbent Sen. Thom Tillis of North Carolina for nearly a year; Tillis won re-election. Tillis did not vote against the election results but, along with many of his Republican colleagues, supported Trump’s legal challenges and recount requests and expressed unfounded concern over the security of mail-in ballots.

As in 2016, the Koch political groups did not directly campaign for Trump, but its work for GOP senators helped him. “The turnout we do for Tillis is helpful to the president indirectly, because we’re turning out conservatives who are aligned,” said Libre Initiative Executive Director.

Candidates the network has supported in recent elections include Josh Hawley (R-MO) and Ted Cruz (R-TX), the two election denial ringleaders in the Senate, and extremist representatives such as Paul Gosar (R-AZ) and Andy Biggs (R-AZ), both Freedom Caucus members who voted against the election results and allegedly helped plan the Jan. 6 events with lead organizer Ali Alexander.

Koch’s new persona is that of a man who seeks to “build bridges” between political partisans in a deeply divided country. His record, up to this very moment, is that of a man who has fueled that divide by bankrolling hyper-partisan operations, think tanks, and media companies that spread disinformation and back radical right-wing policies.

ALEC President Lisa Nelson told a Center for National Policy crowd last year that her group drafted letters that lawmakers could send to their secretaries of state to cast doubt on their states’ election results, implying that this would be a way for them to overturn their constituents’ votes and instead pick pro-Trump Electoral College electors. ALEC members in the Pennsylvania state legislature went on to lead an effort to overturn their state’s electors, and numerous individuals associated with ALEC have ties to the events on Jan. 6 or to the “Big Lie” of voter fraud that fueled the insurrection.

Koch is also a major funder of ALEC ally the State Policy Network and its numerous members, which are right-wing think tanks that promote free-market, anti-labor, and pro-business policies, fight legal battles in favor of conservative ideals, and often have ties to Republican state lawmakers. One member, the Mackinac Center, promoted the “Operation Gridlock” anti-coronavirus restriction protest in Michigan where white militia members, who would later plot to kidnap and execute Democratic Gov. Gretchen Whitmer, recruited followers.

Several Koch-backed groups have been lying about voter fraud for years in a coordinated effort to lay the groundwork for voting restrictions that disproportionately disenfranchise Democratic voters. Some have advocated for purging huge numbers of voters from the rolls.

At the Heritage Foundation, which has received roughly $1 million from the Charles Koch Foundation since 2014, voter suppression advocate Hans von Spakovsky manages its Election Law Reform Initiative. Spakovsky recently argued that mail-in voting is ripe for fraud and has promoted the “voter-fraud myth” for many years. He was a member of Trump’s failed “election integrity” commission, which found no evidence of voter fraud in the 2016 elections.

The Texas Public Policy Foundation, which got roughly $4.9 million from the Charles Koch Foundation from 2014 to 2019, attacked mail-in voting this year as the pandemic raged, a tactic adopted by many conservative groups aimed to boost Republican candidates.

The Leadership Institute, a State Policy Network member that counts Koch as a donor and chairman emeritus, trains young conservatives and publishes Campus Reform, a website that attacks liberal university students, professors, and administrations as well as affirmative action and other policies it claims are illegitimate. Multiple Leadership Institute alumni went on to reveal themselves as overt white nationalists.

ALEC has a history of failing to denounce extremists in its ranks, including former Washington state chair Matt Shea. Even after Shea was accused of white supremacist domestic terrorism, ALEC never publicly denounced him nor cut ties with him.

The Heritage Foundation had Andy Ngo, a prominent propagandist for fascists, give a keynote speech about antifascists in 2019.

Koch may be walking back a small fraction of that funding for divisive groups. The Charles Koch Foundation’s 2019 tax return, obtained by CMD, shows that it did not fund The Daily Caller News Foundation (DCNF), which finances much of the reporting that appears on the website of The Daily Caller, an extremely partisan website founded by Fox News’ Tucker Carlson that often publishes dubious, Republican-friendly stories and has a history of employing white nationalists.

As the leader of an oil and gas empire, Koch has financed a vast climate change denial network for decades. According to Greenpeace, Koch family foundations poured over $145 million into 90 groups that have attacked climate science and policy from 1997 to 2018.

Pressure from Koch’s network on politicians and academics helped politicize climate science and radicalize Republicans on the issue. The result is a deeply divided America, where 72 percent of Democrats and those who lean Democratic believe that “human activity contributes a great deal to climate change,” while only 22 percent of Republicans and Republican leaners agree with this factual statement, according to a 2020 Pew Research Center poll.

In addition to the outfits he directly funds, Koch has been a prominent funder of DonorsTrust and Donors Capital Fund, two connected charity vehicles that direct wealthy conservatives’ donations to the nonprofits of their choosing while hiding the donors’ identities from the public. The two funds, especially DonorsTrust in recent years, have bankrolled far-right, hyperpartisan organizations, even explicitly white nationalist hate groups.

Project Veritas, the frequently discredited sting operation led by James O’Keefe, gets significant funding from DonorsTrust. From 2014 to 2019, DonorsTrust gave $12.5 million to the group, representing a sizable portion of its revenue. During that time, Project Veritas worked with ex-spies recruited by Blackwater founder Erik Prince, who is the brother of Education Sec. Betsy DeVos, to infiltrate and smear liberal groups. Most recently, Project Veritas worked with a postal worker and promoted his false statements about alleged ballot-related malfeasance within the USPS and allegedly attempted to bribe a Minnesota man to falsely claim he was “harvesting” ballots for Democratic Rep. Ilhan Omar. The group has “a cozy relationship” with the self-described “Western chauvinist” Proud Boys, a hate group, according to the Southern Poverty Law Center.

Far-right student group Turning Point USA, which has a history of hiring racists, is also a big beneficiary of DonorsTrust contributions, receiving over $1.5 million from the charity from 2017 to 2019.

DonorsTrust also finances discriminatory organizations and groups considered hate groups by the Southern Poverty Law Center. According to a CMD report, DonorsTrust and Donors Capital Fund combined to give over $13 million to anti-Muslim, anti-immigrant, and anti-LGBTQ organizations from 2014 to 2018, including anti-Muslim hate group the Center for Security Policy and the anti-LGBTQ Alliance Defending Freedom.

The Middle East Media and Research Institute, an organization at the “inner core” of the nation’s Islamophobia network that “attempts to portray Muslims and Arabs as being inherently irrational and violent,” received over $600,000 from DonorsTrust from 2015 to 2019.

Other extreme groups that DonorsTrust has kept afloat include the alt-right-friendly Center for American Greatness and the Prager University Foundation, the nonprofit being online disinformation publisher PragerU, which produces online videos denying climate change, claiming that white privilege does not exist, and spreading white nationalist tropes.