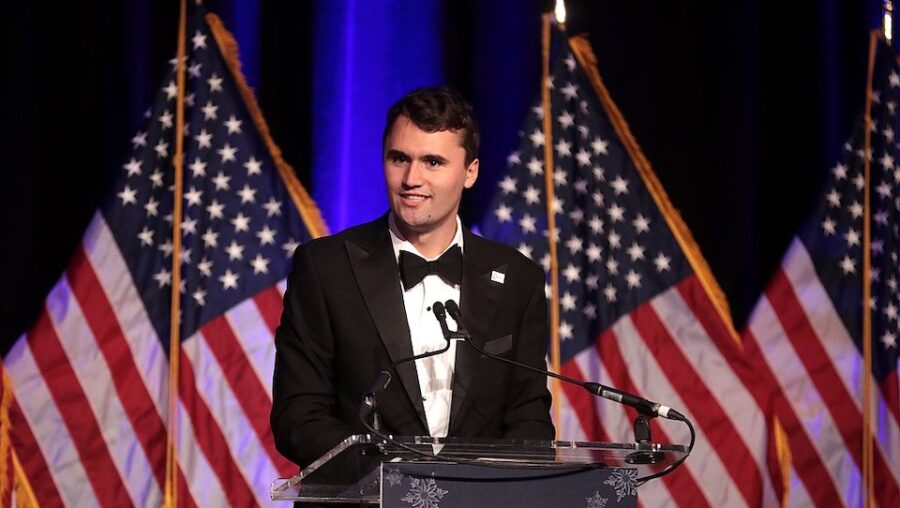 The Trump-aligned Turning Point USA, already working to stir up opposition to mask and vaccine mandates and creating conflicts with its “school board watchlist,” is looking to raise another $43 million to wage a culture war in campuses and public schools across the United States.

A 2021 investor prospectus circulated in August and obtained by the Center for Media and Democracy (CMD) details a seven-pronged approach by the MAGA youth group led by Charlie Kirk to “win the American Culture War and to inspire our kids [to] love America again.”

Trumpists, the GOP, and right-wing groups have seized upon battles over mask and vaccine mandates and the teaching of systemic racism in hopes that it will help drive their base to the polls in 2022.

Kirk used to run Students for Trump, which he incorporated into Turning Point Action, and has been one of the former President’s most loyal sheep. While ballots were still being counted in early November 2020, Kirk led a #StoptheSteal protest in Arizona as part of the larger Ali Alexander effort to keep Trump in office, CMD first reported.

After Trump’s loss, Turning Point Action was listed as a coalition partner on the website for the “March to Save America” that preceded the violent insurrection at the U.S. Capitol on Jan. 6.

Kirk tweeted out ahead of the Jan. 6 Capitol riot that Turning Point Action and Students for Trump sent “80+ buses full of patriots to DC to fight for this president,” and that “This historic event will likely be one of the largest and most consequential in American history.”

“I want to thank my friend Charlie Kirk,” the prospectus quotes Trump as saying. “He has built one of the most powerful youth organizations ever created, Turning Point USA.”

Turning Point USA’s investor prospectus embraces the right-wing trope that America is at war with liberals  who hate our country and that the battle line is in high school and university campuses.

“Schools in this country have become intolerant and nihilistic dens of anti-American hate as Leftist professors slander our country with impunity and radical mobs shut down conservative speech entirely,” the funding document writes.

Calling Leftists “evil at their core,” Turning Point employs white nationalist rhetoric, claiming that, “The Left’s plan is a path of destruction, a turning back of the clock 500 years to a past that’s deficient of Western influence.”

The events budget is the largest at just over $10 million. The document claims that Turning Point has “trained nearly 21,000 activists” at its national events and conferences in eight years, which include not only national and regional conferences but Black, Latino, Jewish, and Women’s Summits as well.

“Kirk and TPUSA owe their success largely to Don Jr and Kimberly Guilfoyle,” a veteran GOP operative told The Guardian.

The next largest budget line is for Turning Point’s “boots on the ground” effort at $7.9 million. The prospectus claims that the national field program has 1,363 chapters in high schools and colleges in all 50 states with a goal of having “1,000 new high school chapters by the end of 2021.”

The media operation, including TPUSA Live, commands $7.2 million of the total budget. According to the fundraising document, “eleven full-time contributors and 275 brand ambassadors” make up the media effort.

It’s unclear if the brand ambassadors are a veiled reference to the “troll farm” of paid youths spreading misinformation on social media that The Washington Post reported on in September 2020.

Turning Point Faith’s budget is the next largest at $6.4 million. Launched this year, the new effort will “address America’s crumbling religious foundation by engaging thousands of pastors nationwide” in order to “breathe renewed civic engagement into our churches,” according to the prospectus. California pastor Rob McCoy, who was fined and sued for keeping his church open during the pandemic, chairs the Advisory Council.

Kirk has long worked to loop the Christian right into his operation. He founded the pro-Trump “think tank” The Falkirk Center at Liberty University with then-Liberty University President Jerry Falwell Jr. in November 2019. In March, Liberty University chose not to renew Kirk’s contract, which led to Kirk starting up Turning Point Faith.

Kirk is also a member of the secretive Council for National Policy, a coalition that Anne Nelson describes as bringing together “the manpower and media of the Christian right with the finances of Western plutocrats and the strategy of right-wing Republican political operatives,” and that was deeply tied to the violent insurrection on Jan. 6.

TPUSA Productions has a budget approaching $3 million, according to Kirk’s donor pitch. Using its “state-of-the-art production studio,” Turning Point USA “has launched a digital assault against Leftist propaganda” with video series like “Socialism Sucks” and “Poplitics.”

The Academy fundraises off the right-wing narrative that “young people are taught that America is fundamentally evil,” and “that American culture is rotten at its core,” and that this new effort is “America’s best hope to fight back against the Left’s takeover of academia.”

Turning Point USA’s “Special Projects” don’t have a price tag in the donor prospectus, but include its Professor Watchlist, which seeks to “expose biased professors through firsthand accounts”; DivestU, a project to encourage donors to drop funding for schools with “anti-freedom and anti-American agendas”; and China on Campus, an effort to close Confucius Institutes that Turning Point believes are used for spying on Americans, disseminating propaganda, and stealing university research.

Turning Point USA does not disclose its donors and it is not required to by law. However, CMD has identified 170 funders that have given the group $26.8 million between 2014 and 2020 through an examination of hundreds of IRS filings. Note, this sum does not include the $22.1 million transferred from the related nonprofit Turning Point Endowment.

The top known contributors to Turning Point USA are: