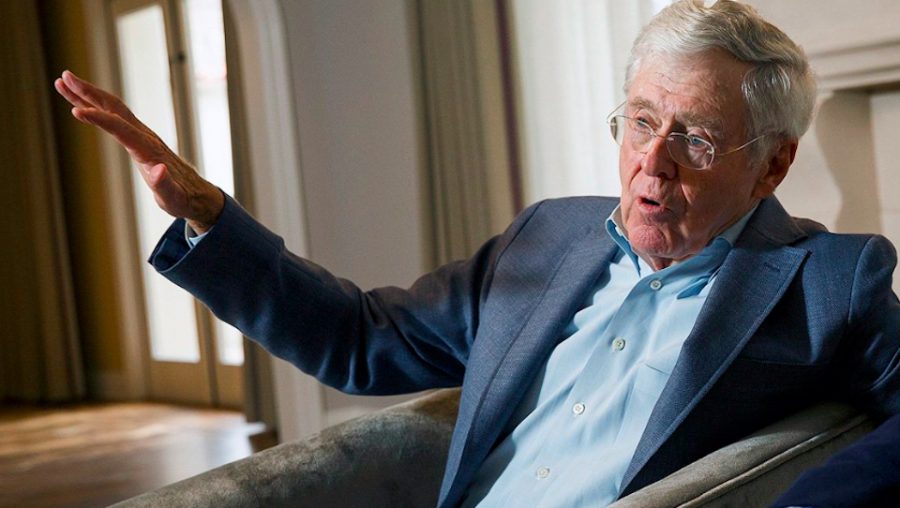 The Charles Koch Foundation and Charles Koch Institute paid out $149.2 million in grants in 2020 to universities, right-wing policy, litigation, and advocacy groups, and other causes, the latest IRS filings obtained by the Center for Media and Democracy (CMD) detail.

Charles Koch, the CEO of Koch Industries that Forbes reports is worth $52.8 billion, transferred $26.7 million from one of his trusts to his personal foundation, according to the Charles Koch Foundation filing. The contribution section on the Charles Koch Institute filing is empty as 501(c)3 registered tax-exempt organizations are not required to disclose donor names or amounts.

The Charles Koch Foundation and Charles Koch Institute gave $89.7 million to academic centers, colleges, and universities in the United States and abroad, CMD calculated. The total is less than the over $100 million Koch doled out for higher education in 2019.

Topping all university recipients is the perennial Koch favorite George Mason University, which received $21.5 million from the Koch Foundation. More than $5 million of that went to support the university’s Institute for Humane Studies, which Koch has funded since the 1960s. Koch currently sits on the board of directors of the Institute for Humane Studies along with the Charles Koch Foundation’s Ryan Stowers and Stand Together‘s Brian Hooks.

Koch reportedly told a gathering of his peers in 1976 to “focus on attracting youth” because “this is the only group that is open to a radically different social philosophy.”

Koch, and his allies argued that the rule infringed on their First Amendment rights and opened donors up to harassment that deters their giving, despite the fact that the information was kept confidential from the public.

CMD analyzed the available IRS tax filings between 2015 and 2019 of 11 prominent right-wing funders and Koch contributions to the Republican Attorneys General Association (RAGA) and found that those funders gave nearly $222 million to 69 organizations that filed amici supporting Americans for Prosperity Foundation.

The 2020 IRS filings from the Charles Koch Foundation and Charles Koch Institute detail another $11.9 million in contributions to 22 nonprofits that filed supporting briefs in the case, bringing the total to close to a quarter of a billion dollars.

American Juris Link, which its president Carrie Ann Donnell describes as "basically like the SPN [State Policy Network] for litigators," is tied to the Federalist Society, RAGA, SPN, and Ballotpedia.

Charles Koch contributed $4.7 million to right-wing litigation centers and advocacy groups in 2020, the majority of which came through his institute rather than his foundation.

The Pacific Legal Foundation, New Civil Liberties Alliance, and the Federalist Society all received at least a million dollars from the Koch funding vehicles. The Federalist Society, and the co-chair of its board Leonard Leo, are responsible for packing the federal court system with right-wing judges, including five U.S. Supreme Court justices with ties to the group.

Koch is the largest known donor to the New Civil Liberties Alliance, and the litigation outfit has defended his interests and employed former Koch network operatives in return.

The Charles Koch Institute also gave $275,000 to the anti-LGBTQ, Christian litigation powerhouse Alliance Defending Freedom, a first for Koch, according to CMD's tracking of his funding. Designated by the Southern Poverty Law Center as a hate group, Alliance Defending Freedom is a major pusher of so-called “campus free speech” legislation and in recent years has been an active litigant in cases seeking to upend LGBTQ rights in the name of "religious freedom."

In addition to the tens of millions doled out for the efforts above, the Charles Koch Foundation and Charles Koch Institute gave over $575,000 to the American Legislative Exchange Council (ALEC) and over $622,000 to the Heritage Foundation, two groups that led the voter suppression effort unfolding nationwide this year.

The Cato Institute, a libertarian "think tank" founded and funded by Koch, received $2.2 million in 2020 from the two Koch funding vehicles.

Not all of Koch's money went for ideological purposes. In addition to funding some public radio programs, Koch added $2.3 million for the Thurgood Marshall College Fund and $1.5 million to the United Negro College Fund last year. These funds support black attendance at historically black universities and colleges.